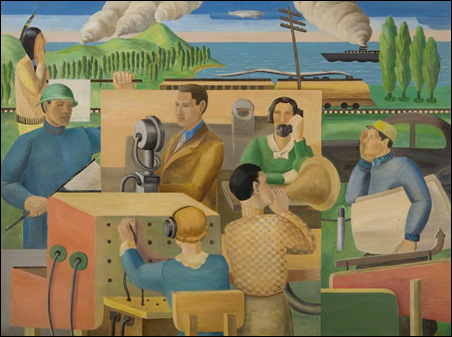 Courtesy of the Minnesota Historical Society
‘Communications’ by Ingrid E. Edwards, 1936, oil on board

In 1932, Franklin Delano Roosevelt won the presidency in a landslide election. With unemployment rising, investment banks collapsing and the stock market plummeting (sound familiar?), he promised a New Deal for America. Like now, our government resolved to deficit-spend its way out of the economic crisis. But rather than bail out the big boys, America invested in its workers.

Works Progress Administration (WPA) famously put Americans to work constructing and repairing schools, libraries, parks and highways. But fewer folks know about another subset of the WPA, the Federal Art Project: a remarkable — and productive — program that paid artists for doing what they did best.

“More art was made by more Minnesotans at this time than any other period of time,” said Brian Szott, art curator for the Minnesota History Center, in a gallery lecture on Tuesday evening. In Minnesota, by 1940 the program had produced 444 oil paintings, 500 watercolors, and 128 prints. Artists were paid $25 per week (Szott says that’s $360 by today’s standards) in exchange for producing a work of art every 4 to 8 weeks, depending on scale.

Of course, all that art needed a home. As a result, many a high-school gymnasium became graced with a mural; courthouses and other public buildings received the art, too. But many of the traditional landscape paintings and prints went to the Ah-Gwah-Ching Tuberculosis Hospital near Walker, Minn. (It was only appropriate — “Ah-gwah-ching” is Ojibwe for “out-of-doors.”) In fact, the hospital became the largest repository of WPA art in the state.

Abstract art to U of M
Meanwhile, the local manager of the WPA/Federal Art Project, a popular artist and administrator named Clement Hauper, took care to ensure that abstract art landed in more tolerant hands at the University of Minnesota. A recent exhibition at the Weisman Art Museum displayed some of those works.

When Ah-Gwah-Ching eventually closed, in 2007, much of the art went to the Minnesota History Center. Today, the public can admire selections from this collection in a strange but wonderful exhibition at the James J. Hill House. Its long-winded title: “Thank God and FDR: New Deal Art From Minnesota, Selections from the Ah-Gwah Ching Archive.” The show is well worth a visit, and runs through Nov.  2. 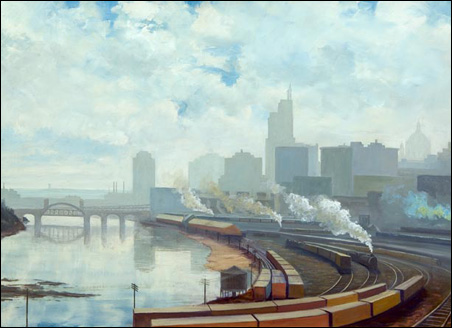 “Minnesota had a highly developed woodcarving tradition, thanks to its German ancestry,” said Szott. Therefore, the exhibition features an impressive collection of carved characters and candlesticks. However, per the standards of the time, these works were unattributed to their creators.

Figurative work was the national trend
In painting and printmaking, figurative work was the national trend; for an example of this, gallery-goers should visit Ingrid E. Edwards’ 1936 painting “Communications,” which features a newspaper boy, a telephone operator, a radio announcer, smoke signals and a railroad train. However, Szott says there seemed to be a regional impulse to capture landscapes. Because of this — and because of the nature of work that went to Ah-Gwah-Ching — the exhibition is dominated by images of rivers and rolling farm fields. Examples include a fabulous lithograph, called “Sheep Resting,” by the respected Minnesota artist Miriam Ibling and a remarkable 1939 oil painting, “Angus Station, 54 Below,” by another well-known Minnesota artist, Arthur T. Kerrick.

The James J. Hill House Gallery is small, but the art gives the room an airy, expansive feel. As a visitor looks around, she is enveloped with meticulously tilled fields, rushing rivers and rising steam — from boats, from trains. As one adept observer noted, there is a certain optimism about these works. Rather than dwelling on the gloomy realities of the Depression, this WPA-funded collection conveys progress, gratitude, splendor and hope.

WPA art: impressions from the Depression