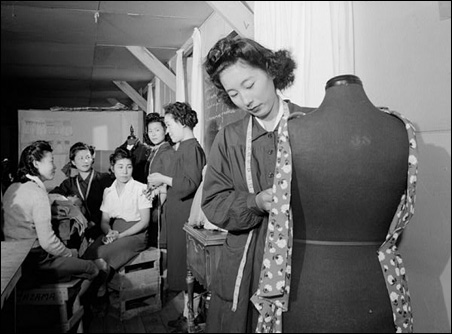 Courtesy of the Library of Congress
Minnesota-based author David Mura wants us to remember the internment of Japanese-Americans. In 1943, renowned photographer Ansel Adams took this photo of a dressmaking class at the Manzanar Relocation Center in California.

Two men are walking toward each other on a narrow sidewalk. One is Asian and one is white. Who steps aside to let the other pass?

A. The white guy.
B. The Asian guy.
C. Neither; they crash into each other.
D. Depends on what city you’re talking about.

Answer: D. On the West Coast, the Asian guy doesn’t yield because as part of a large population group there, he’s not used to being deferential. On the East Coast, however, if he doesn’t yield, he’ll run smack into the white guy, says novelist David Mura, because the white guy expects that the Asian guy will step aside. What about here in the Midwest?

“I will not yield, even though the other guy expects me to. Although sometimes I will. It depends on the situation, depends on my mood that day,” he says. “[The writer] Alexs Pate and I were in Asia a couple weeks ago, and this white guy shoves me aside, and is he shoving me aside because he wants to pay his check, or is he shoving me aside because he’s a white guy and I’m an Asian guy? Alexs and I are both thinking, “Is there something racial going on here?” And he says, ‘Sometimes this is why I stay out of bars.’ “

The two writers are fast friends and count on each other for creative support. Mura, whose new book, “Famous Suicides of the Japanese Empire,” has just come out, says there were very few Asian-Americans in the Twin Cities when he moved here in 1974, and although the creative community for people of color has exponentially expanded, there are still few male novelists of color. 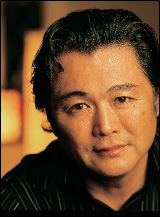 “Alexs and I have talked about what it means to be writers of colors in Minneapolis as opposed to New York or Los Angeles. You’re more obscure, less connected to networks of writers. It also allows you a certain amount of freedom to work on your own, in your own way,” says Mura, who grew up in Chicago. “That forced me to look at myself and my work differently. When I first started writing, I didn’t think of myself as a writer of color. Then when I came here, I went through a re-envisioning and understanding of who I was, and I fought certain battles over issues about race. I fought pretty much alone.”

Turf, honor and race
In “Suicides,” Mura examines race through the interactions of young boys fighting over turf and honor, young men fighting for sidewalk space, and an entire generation of Asian-Americans scarred by World War II, during which the United States imprisoned 110,000 Japanese-Americans in internment camps following Pearl Harbor.

The internment, which was partially motivated by white West Coast farmers hoping to eliminate Asian competition, was an alleged safeguard against espionage, and included people who were 1/16th to 1/8th Japanese descent — even orphaned infants. A majority were U.S. citizens. No Japanese-American was ever convicted of any espionage. Today the internment has been largely forgotten by the larger culture, although its echoes still ring through Japanese-American families.

“When I was growing up, if someone’s name was mentioned, the response was, ‘Oh, what camp were they in?’ But there was still a deep discomfort there. They were forced to live behind barbed wire. People of my parents’ generation didn’t talk about it until much later. They felt it was a mark of shame upon them. They wanted to forget the painful experiences,” Mura says. 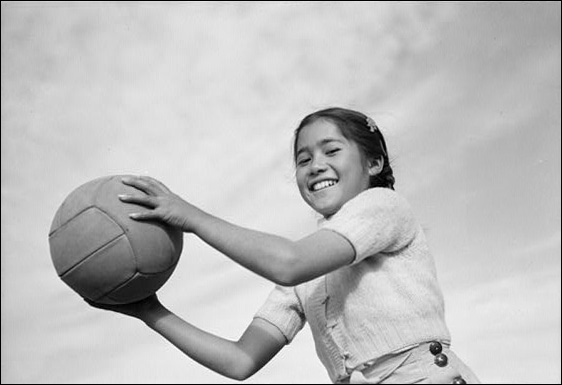 Now, however, Mura wants to help people remember. In his book, Ben Ohara embarks on a journey to try to understand his family. His younger brother, a cracked genius, disappeared in the California desert a decade ago. The boys’ father committed suicide after enduring years of shame for being a “No-No Boy” — a person who refused to sign a loyalty oath while in the internment camps. (No-No Boys answered “no” to two questions, pledging allegiance to the U.S, and agreeing to serve in the armed forces.)

Sons of the Japanese-American World War II vets (who answered Yes-Yes) enjoyed bragging rights, while Ben finds himself fighting to defend his father, and eventually himself. Both brothers fight with fearsome confidence and precision at various points throughout the book. While Mura says neither the family nor the fighting is based in his own history, he shares with Ben a childhood filled with hero worship: “John Wayne, TV shows based on World War II, the Japanese-American 442nd regiment — I loved that stuff,” he recalls.

Today, he realizes that the No-No Boys were heroic for, in a way, not yielding their sidewalk. “I received a couple emails from men who were No-No Boys and their reaction was very favorable to the book. They had been waiting for this sort of vindication by history.”

Author learns when not to yield in matters of race