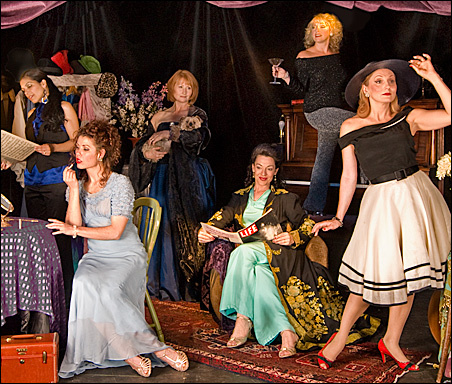 Sure, director and producer Perrin Post is excited about the prospect of the latest production of her show, “Broadway’s Legendary Ladies,” opening at the Ordway’s McKnight Theatre. Post the director is thrilled to be able to highlight the musical contributions of the likes of Ethel Merman, Angela Lansbury and Julie Andrews, along with the skills of half a dozen extremely talented local performers.

But on the morning before the first preview, Post the producer has one main thing on her mind: selling tickets.

“I think the show is best we’ve ever done it,” Post says. “It’s not the show I’m worried about; it’s the economy. As a small-time producer in a big space, I feel like I’m still pushing to sell tickets.”

Two successful runs
Post first produced “Broadway’s Legendary Ladies” in 2004 at the Loring Playhouse, which was followed by a 13-state tour. Those two successful runs pointed to a revival, but sales have been soft to date. She hopes that another factor from the first run will help out this time. “It’s one of the shows that people just kind of showed up. I didn’t even advertise. And these weren’t my regular theater patrons.”

“What makes it worth it for me is to hear the girls sing,” Post says. “This show is designed for each of these women in mind.”

While the show pays tribute to many of the leading ladies of Broadway, Post doesn’t want the actors to just replicate the past performances. “I told them to listen to the words and put themselves into it,” she says.

Familiar Broadway standards
The evening is not just solo performance after solo performance either. It features the singers in duets and other groups and includes plenty of familiar Broadway standards. Audiences also “learn stories and the history of these women,” Post says. “One thing about these women, you can make fun of someone like Liza Minnelli, but in her heyday, she was something else.”

“Broadway’s Legendary Ladies” also allows the actors to take on great roles they have missed in the past, if only for one song. “Michelle has never played Maria in ‘The Sound of Music,’ but now she gets to sing it. Holly has never done ‘Funny Girl,’ but she gets to do a little Barbra Streisand here.” (You can hear Post and the actors talk about the show here.)

And despite the soft economy and tough times for ticket sales, Post is dedicated to the show.

“It’s a staple. This is a timeless show and as long as these women can keep singing it, I will keep bringing it back. If I could, I would run it forever,” Post says.