Clay Moore moved to Minnesota in 2000 and left in 2006, but it seemed he was here much longer than six years. He made connections quickly and was soon playing gigs all around the Twin Cities: at Fireside Pizza and local jazz festivals, with the JazzMN Big Band, and at clubs including some still open and some long gone: the Dakota, the Artists’ Quarter, French Press, Jazzmines.

He backed singers including Ginger Commodore and Debbie Duncan, fronted his own trio, and performed with top area talent like Anthony Cox, Jay Epstein, Gordy Johnson, and Phil Hey. He taught guitar at McNally Smith College of Music in St. Paul (formerly Music Tech) and recorded two CDs, “To a Tee” (2002) and “¡Damelo!” (2004).

Then one day he moved with his wife, Emily, and their baby daughter to Texas, where he was born. They settled in Brownsville, a city at the southernmost tip of the state.

MinnPost: Why did you leave Minneapolis for Texas?

Clay Moore: The Minneapolis scene was starting to slow down. A lot of places were shutting down or cutting back — the Sofitel, Sophia’s, Brilliant Corners. [Bassist] Michael O’Brien left town; he and [drummer] Greg Schutte were the band I had forged the closest alliance with. Plus, we had our child and thought we needed to be someplace warmer where she could be outside for most of the year.

Also, and this is the big secret of our move, the current financial crisis — I saw it coming. For us, it was about downsizing. I thought, if things take a turn for the worse economically, do we want to be living someplace where it gets to be 20 degrees below zero? 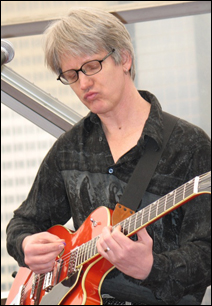 MP: What have you missed most about the Twin Cities?

CM: It’s a lot more cosmopolitan than here. I’m about a mile as the crow flies from Mexico, and Brownsville is the most homogeneously Mexican city in the United States. It’s great, I love the culture, but it’s very circumscribed, very conservative in a way … I miss having a city that has everything.

MP: Why so long an absence, and what brings you back now?

CM: We don’t have family there. It’s been a matter of time and finances. I got a really cheap ticket on Sun Country Airlines.

MP: What brought you to Minneapolis in the first place?

CM: I was at a turning point career-wise. My first CD [“Meeting Standards”] was out and had been fairly well-promoted. One of the stations where it was best received was KBEM. I started doing some research, found the Twin Cities Jazz Society website, made mental notes of the places where jazz was played, and got in touch with some of the players.

MP: You became well established in a fairly short time. What advice would you have for a jazz musician just coming to town?

CM: You have to be humble enough to go out and sit in and be the new guy. You also have to be confident enough to approach the club owners directly. I started hitting them up for work immediately. … I read websites of players and emailed some people, like Jay Epstein and Gordy Johnson. Jay was the first person who called my telephone after it was installed.

MP: Austin is a big music town, and North Texas State has one of the best jazz education programs in the country, but there isn’t much jazz in Texas.

CM: We were spoiled living in the Twin Cities. At one time I counted 14 different venues where I performed with my trio. You can’t do that in L.A., in San Francisco, or almost anywhere else but New York City and maybe Chicago.

The group I play with now, Frontera, is one of two jazz groups in this entire area — not just Brownsville but the whole Rio Grande Valley. We’re it. We have a monopoly, but at the same time, if our bass player takes a trip somewhere, we don’t have anyone to replace him. [Visit Frontera’s MySpace page to hear their sound.]

On the other hand, we just finished playing the Corpus Christi jazz festival. A couple of weeks ago, we had a Latin jazz festival here. We have a guitar festival in the spring. We have a festival coming up this weekend, the South Padre Island International Music Festival that’s bringing in a lot of different music. Willie Nelson is the headliner. We’re playing that.

CM: At the University of Texas in Brownsville. I teach a jazz improvisation course and I have a jazz guitar ensemble. Nine nylon-string guitar players. When I’m in St. Paul, I’ll do a clinic for guitar students at McNally Smith.

MP: What will you play at the Artists’ Quarter?

CM: I’ll probably bring in some cool tunes — Dexter Gordon’s “Fried Bananas,” Lee Morgan’s “Ceora.” Songs we can play without much rehearsal and still be interesting. Maybe a couple of originals.

What: Clay Moore with Pete Whitman, Jay Young and Kenny Horst
Where: The Artists’ Quarter
When: Thursday, Nov. 6, 9 p.m. ($5)

Halloween weekend: I wrote about Halloween last week so you could plan and I could cover Clay Moore this week. For Friday (tonight), Dennis Spears, Maud Hixson, Rick Germanson, and the Atlantis Quartet look good. On Saturday, Germanson returns to the AQ, so if you miss him tonight you can catch him then. Click here for all the details.

Next week: Skip ahead to Thursday, Nov. 6, the final installment in the Jazz88 REEL Jazz Film Series. Kevin Barnes brings independent jazz films to town and screens them at the fun and funky Bryant Lake Bowl Theater. The last installment in his fall season features “Big Ben: Big Ben Webster in Europe” (a look at the tenor sax giant) and “Mystery, Mr. Ra” (as in Sun Ra). The wildly gifted high school kids of the Isaac Zuckerman Quartet jumpstart the evening. Music begins at 6:30 p.m., films at 7; $10. Seating limited to 80. Email Kevin (kevinb@jazz88fm.com) and he’ll put your name on the list. See the films, then head east to the AQ for Clay Moore and arrive just in time.