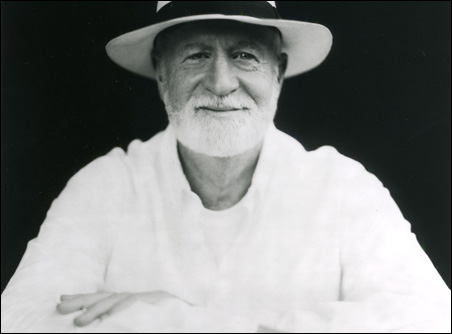 Mose Allison is at the Artists’ Quarter this weekend.

What has surprised many people most about Mose Allison isn’t his acerbic wit, bone-dry singing style, piano chops, extensive discography (more than 30 albums since 1957), the number of songs he has written (150 or so), his tireless touring (100-plus dates this year; he turns 82 in November), or his indisputable influence on music.

It’s the fact that he’s not black.

The Who’s Peter Townshend once thought he was. When he discovered Allison was “f****** white!” it changed his life. “Mose was one of the white guys that made it clear that white men could sing the blues,” Townshend told Paul Bernays, director of the BBC documentary “Mose Allison: Ever Since I Stole the Blues.” See a clip here.

The film’s title comes from a song Allison penned in the 1980s. After a British journalist suggested he was “stealing” the blues, he wrote:

Well have you heard the latest
Are you in the know
It’s in the morning papers
And it’s on the radio
It’s even going to make the TV news:
White boy steals the blues.

Allison brings his white self and hip, jazzy blues to the Artists’ Quarter this weekend for three nights of genre-defying, crowd-pleasing music. The AQ has been part of his circuit for decades, starting back when it was on 26th and Nicollet in Minneapolis (now the site of the archly named Arts Quarter Lofts).

“I think I first played with Kenny 30 years ago,” Allison reminisced by phone from his home on Long Island. “It’s been a long time.”

“Kenny” is AQ owner and resident drummer Kenny Horst. Like many jazz artists, Allison plays with local pick-up sections when he travels. Here he often teams with Horst and bassist Billy Peterson; this time Adam Linz will be on bass. See a video from last year.

First song penned at age 12
Born in 1927 near tiny Tippo, Miss., Mose John Allison Jr. taught himself to play piano, hanging around the jukebox at the local gas station, soaking up the sounds of blues and boogie-woogie. He wrote his first song at age 12. “It was called ‘The 14-Day Palmolive Plan.’ The idea was that you turn on the radio and all you get is commercials. Nowadays, TV is worse.” (Four letters, Mr. Allison: TiVo.)

His father was a stride pianist and “blues was in the air,” or maybe the water, since so many blues legends came from the same part of the world: Muddy Waters, B.B. King, Bo Diddley, Howlin’ Wolf, Robert Johnson, John Lee Hooker, and the list goes on.

In high school Allison listened to Louis Armstrong, Fats Waller, Duke Ellington, Louis Jordan and Nat “King” Cole. He played trumpet in the bands and wrote more songs. He spent a year at the University of Mississippi, joined the Army and played in the Army Band, returned to Ole Miss, left to form his own trio, and married Audre Mae, who has been his wife for 57 years.

What’s their secret? “I once said it’s because we don’t have anything in common,” he deadpanned. “She didn’t like that because we have kids and all that.”

Back in college, this time Louisiana State University, he graduated with a B.A. in English and philosophy. (Jet magazine once asked him if he was the first black man to graduate from LSU.) Does he think a major in English is worthwhile? “Who knows? Some of my songs come from literature. It doesn’t hurt, that’s for sure.”

In 1956, Allison moved with his young family to New York, where he played and recorded with jazz greats like Stan Getz, Zoot Sims and Gerry Mulligan, fronted his own trio, released his first recording as a leader (“Back Country Suite”) and kept writing.

‘Monsters of the Id’ and other wordplay
His lyrics are profound, perceptive, caustic and often hilarious, full of irony and wordplay. (Time Out noted “his gift for writing a song with a sting in the tail.”) The prematurely titled “Mose Allison: Greatest Hits” (1988) contains several of his best-known sides: “Parchman Farm,” “If You Live,” “Young Man’s Blues.” (Original lyrics: “A young man ain’t nothing in the world these days.” Today’s version: “An old man ain’t nothing in the USA.”)

Many more followed: “Your Mind Is on Vacation,” “Ever Since the World Ended,” “Middle Class White Boy,” “Certified Senior Citizen,” “Everybody’s Crying Mercy.” And “Monsters of the Id,” which only recently became popular during his shows.

“When I first did it, nobody understood it,” he said. “Now everybody digs it. … Events have caught up with it.” A sampling of the lyrics:

Monsters of the id
No longer stayin’ hid
And terrors of the night
Are out in broad daylight….

The creatures from the swamp
Rewrite their own Mein Kampf
Neanderthals amuck
Just tryin’ to make a buck.

His songs have been covered by artists better known than he is: the Who, Bonnie Raitt, the Clash, Eric Clapton, the Yardbirds, Elvis Costello, and Diana Krall, to name a few. In 1996, Van Morrison recorded a tribute album, “Tell Me Something: The Songs of Mose Allison.”

Why not hear them from the source? “The main thing about Mose is there’s only one,” Horst says. “Tons of people have imitated him, but he’s one of a kind.”

At the AQ, Allison will perform originals and songs he has made his own, maybe “Seventh Son” and his famously lugubrious take on “You Are My Sunshine.” There has been a request for Willie Love’s “V8 Ford Blues,” which he recorded in 1961, when gasoline was 19 cents a gallon.

Swing into Fall: Leaves are turning, temperatures are falling, and it’s getting darker sooner. Doug Haining and his Twin Cities Seven welcome the season with music of the great swing-era composers. The charming and beautiful Charmin Michelle sings. Feet will tap. Hopkins Center for the Arts, 7:30 p.m. Saturday, Oct. 4. Tickets at the door or call 952-979-1111. ($24 regular admission/$20 seniors, Friends of the HCA, TCJS members/$12 student).

Steve Smith’s Jazz Legacy Band: Most people know Smith as the drummer for the stadium rock band Journey, but jazz was his first love and that’s what he (mostly) plays now. His Jazz Legacy quintet honors the great jazz drummers of the past and also performs original compositions and arrangements by the band members. Learn more from Smith in this preview video. The Dakota, 7 and 9:30 p.m. Tuesday, Oct. 7 ($25/$20/$16).