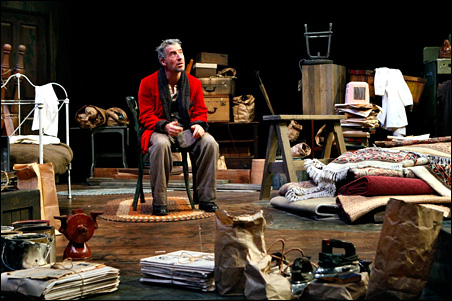 Epp and McGovern are working together again, this time under the auspices of the Guthrie Theater. Epp joins Stephen Cartmell and Kris L. Nelson for a McGovern-directed production of Harold Pinter’s “The Caretaker,” which opens this week in the Guthrie’s Joe Dowling Studio theater.

Epp’s presence in “The Caretaker” derives from this summer’s closing of his longtime Twin Cities home, Jeune Lune. As a company member since the 1980s, Epp was as synonymous with the company as artistic director Dominique Serrand.

The shuttering of the theater left him without work for the fall, so he jumped at the chance to take on Pinter, whose work he had never performed in the past.

“The Caretaker” was Pinter’s first taste of success. After years of acting and a couple of notable, if not successful, early works, “The Caretaker” took the London theater establishment by storm in 1960. In it, Pinter began to examine the issues that would dominate his work for the next 50 years – the struggle for power, even in small groups of people; the power of language and the hidden meanings behind the surface of everyday speech, and, of course, the language of pauses and silence.

As Epp and the company began to work through the script, he found plenty hiding within the text. “It’s like good poetry,” he says. “There are layers of meaning. And it feels political, but there’s no sense of it having an agenda or being didactic. There’s also a real sense of sadness, but it can be quite funny at the same time.”

“The Caretaker” follows three characters – brothers Mick and Aston, and an old tramp, Davies. Epp plays Davies, whose presence interrupts and changes the balance of power between the two brothers.

Though it is played out in subtle ways, the play is also very political. That aspect of Pinter’s work has only grown over the years, as later plays – such as “Ashes to Ashes” – make that much more overt. Pinter’s political anger also drew Epp to this play and the rest of his work, including an incendiary speech given in 2005 after Pinter won the Nobel Prize for literature.

Context aside, Epp is also thrilled to work with two talented actors and a director, all of whom he knows well. This familiarity has helped to unpack the layers of meaning within the script, Epp says.

One subject Epp isn’t ready to talk about is the collapse of Jeune Lune. The longstanding company closed in July under the weight of accumulated debt. For Epp, all of the years of effort and artistic exploration, and the loss of that platform, “cannot be summed up in a sentence.”

Instead, he wants to concentrate on the task at hand – bringing Pinter’s work to life for the audience. “Ultimately, the play resonates not just with what happened in the 1950s, but what is happening today,” he says.