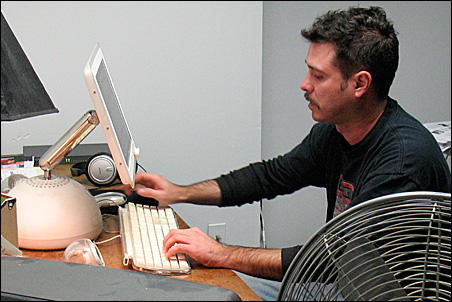 Never a stranger to the silly side of rock ‘n’ roll, the Sound Unseen Music and Film Festival will wrap up its ninth year on Thursday night with “Anvil!,” a documentary portrait of the titular Toronto headbangers that’s almost too funny — too Spinal Tappin’ — to be true.

Seriously, the name of Anvil’s drummer is Robb Reiner (maybe or maybe not to be confused with the meathead director of “Tap”). The band pays a visit to Stonehenge; their new-and-improved producer turns the guitars up to 11, et cetera. Stroking their axes for three full decades, these near-impoverished metalheads were nobodies in the last recession! Long-haired frontman Lips resorts to telemarketing for a day, then resumes rocking — bottom-billed in a 20,000-seat Japanese arena’s all-day metalfest. Good morning, Tokyo!

Screening, like most of the SU films, at St. Anthony Main (Thursday at 7:15 p.m.), “Anvil!” (full title is “Anvil! The True Story of Anvil”) could be said to usher in a new sub-subgenre: the mock-rock-doc-not.

“Any artistic project brings out the personality of the person who’s in charge of it,” says newly installed festival director Rick Hansen over the sound of a dribbling basketball; his Unseen office is located in the MTS Com Arts High School, which will host the upcoming student-populated EDU Film Fest, and which happens to be right across the street from where Bob Dylan recorded “Blood on the Tracks.”

“I’m a music fan but also a die-hard cinema exhibition type,” confesses Hansen, who worked for years at Minnesota Film Arts and, before that, at Red Eye Cinema. “So where Nate Johnson, who founded Sound Unseen nine years ago, brought an entrepreneurial spirit, and where Gretchen Williams built up the events around the films, I’m really most interested in the film programming — in bringing new films with and about music to Minneapolis.”

A Steinway, and R&B’s Otis
Not to say that everything in Sound Unseen — co-programmed by Jim Brunzell and Steve Holmgren — is entirely new. Last night’s double feature of “Dead Man” and “Rust Never Sleeps” was what classic-rockin’ KQRS would call a “double-shot of Neil Young,” with the crazy horseman contributing the electrified Western soundtrack to the former film, and his entire band to the latter. Likewise retro, the documentary “Note by Note” (Wednesday at 5:30 p.m.) observes the creation of a Steinway concert grand piano, #L1037. “Every Beat of My Heart” (Tuesday at 5:30 p.m.) explores six decades in the life of R&B godfather Johnny Otis. And Sekuler’s film harkens back to the dance/trance films of Maya Deren, Merce Cunningham, and others.

Shot entirely with a digital still camera, the 50-minute “Merely Mouthpiece” is, on the most basic level, an unusual ode to motion. It’s also a movie with a Nietzsche quote, a pair of twins, someone wearing a bunny mask, and a corporate hallway as simply and starkly oppressive looking as the one in Jean-Luc Godard’s “Alphaville.”

“All the actors in the film, except for one, have dance backgrounds,” Sekuler explains by phone from Seattle. “Because it’s a stop-motion piece, I wanted to work with people who were very comfortable moving through space. There’s no dialogue in the film, so the performances are not like typical acting.”

Sekuler, who’s the program director of Seatlle’s Northwest Film Forum (and a former programmer at Minnesota Film Arts), will be present at his “Merely Mouthpiece” screening, as will members of the Spaghetti Western String Co., which composed and performed the film’s score. He believes the event, happening only days after what appears to be the definitive news of Oak Street Cinema’s demolition, will help reiterate the significance of public film exhibition.

“In Minneapolis, there’s a strong appetite for alternative, independent and repertory film programming, but there doesn’t seem to be too much of it going on any longer,” Sekuler says. “I think the film-going community in Minneapolis and elsewhere could use some reinvigorating. Most people still seem scared out of their minds that at some point everything [cinematic] will be digitally delivered to their houses.

“To me, the importance of these [exhibition] spaces goes beyond cinema. They’re really more like community centers — gathering spaces not just for cinema, but for people.”

What: 9th Sound Unseen festival
When: Through Thursday, Oct. 30
Where: St. Anthony Main Theatre, except for “Merely Mouthpiece” (see map)
Tickets: $8, ($6 for students and seniors with ID)