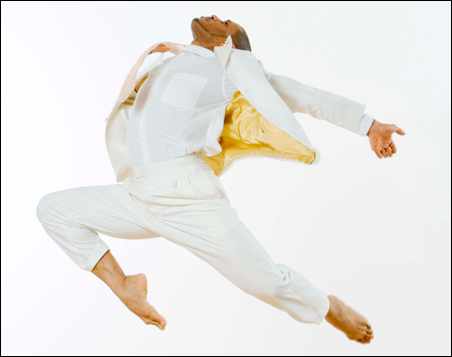 Photo by Basil Childers, courtesy of the Ordway

Ron K. Brown’s dance company Evidence, which he founded in 1985 in Brooklyn, N.Y., rarely performs in the Twin Cities. Dancegoers’ exposure to Brown’s work is largely limited to his 2006 solo for Toni Pierce-Sands (co-artistic director of TU Dance), titled “Clear as Tear Water.”

A sumptuously simple fusion of Brown’s signature amalgam of contemporary concert dance and Africanist sensibility and movement traditions, the choreography gives the commanding Pierce-Sands the opportunity to tear and scoop through space, circle round a contemplative stillness, and move with a singular grace that’s nothing less than kinetic prayer.

An unabashedly spiritual quality infuses all of Brown’s work, in fact, as well as sense of history, tradition and gratitude to “the people we come from,” Brown said during a phone interview last week.  Tonight, Evidence performs three works from the repertory at the Ordway in St. Paul. (You can watch an excerpt here.)

Draws from West Africa, Caribbean
Brown draws much of his choreography from the traditional dance forms of West Africa and the Caribbean, he said, “because of the sense of purpose that’s already a part of the dance.” About the solo for Pierce-Sands, he explained, “all I knew was it was about love, about her being love in the world, and the kind of responsibility that is. So some of the movement came from Cuba, and dances associated with the Afro-Cuban goddess of love, femininity and rivers. I didn’t have to make anything up. I just used some of those steps.”

In recent years, Evidence has been in residence at the College of St. Benedict in St. Joseph. In January, the company performed “One Shot” at the Benedicta Arts Center. Inspired by the photographs of Pittsburgh native Charles “Teenie” Harris (nicknamed “One Shot” for his ability to capture the essence of his African-American subjects in a single camera shot), the work integrated Brown’s singular amalgam of contemporary and Africanist dance with projections of Harris’ black-and-white photographs.

Evidence will perform the first section of “One Shot,” titled “First Glance,” at the Ordway. Also on the program is “Grace,” which Brown choreographed for Alvin Ailey American Dance Theater in 1999 and brought into his company’s repertory in 2003. “When Judith Jamison [legendary dancer and artistic director of the Ailey company] asked me to make a piece, I thought how do I get there?” Brown recalled.

“I remembered seeing the Ailey company when I was in second grade, and I went home and choreographed a dance to a chair. And I was terrified to take a dance class! So I thought about that and how Ailey loved Duke Ellington, and decided to work with that music.”

Acclaimed for his musicality
Brown has been acclaimed for his deep musicality, for probing the recesses of rhythm and melody with a full-bodied choreography that allows audiences to see—and hear—the music anew. “Come Ye,” set to music by Nina Simone, is reportedly such a work, and features jubilant processions of dancers striding before a film montage of cultural icons from Gandhi to Bob Marley.

When Brown started his company, he had a “fear of bastardizing traditional African dance,” he said. But while teaching on the Ivory Coast, he visited both high-end and neighborhood dance clubs, took part in ceremonies, and watched contemporary concert work. “People wanted me to take traditional dance and make contemporary messages with it,” he said, “and I began to understand where I am in the continuum.”