Palin reportedly spent about $75,000 at Neiman Marcus, and another nearly $9,500 at Macy’s downtown. (And now comes word that Jeff Larson, a well-connected Republican with Minnesota ties, paid the bill.)

Who knew you could spend that much on clothes in one visit?

Both Neiman Marcus and Macy’s are very tight-lipped and won’t breathe a word about her purchases or their celebrity customer.

But there are plenty of people in the Twin Cities who know how it’s done because they also dress up people for a living. 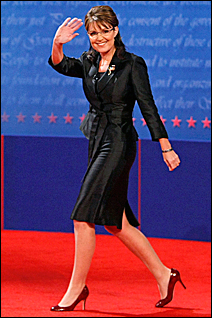 “She probably didn’t go into the store,” says Carrie Leum, owner of Corset, a personal shopping and style business in Hopkins. With security and all that, Leum thinks department store staff brought several outfits to Palin at her hotel.

“They could have taken one or two (clothing) lines over,” says Leum. “They probably also knew to go for a patriotic look, so they probably brought every red suit or every blue suit they had.”

Apparently, Neiman Marcus doesn’t
do that kind of delivered-to-your-door shopping for everybody, but Leum says “any personal shopper would go to that kind of client.”

In a way, it’s what Leum does with her clients. After a consultation and 90-question survey — about a woman’s measurements, size and personality — Leum pulls together “looks” for them. Each season, she delivers five full outfits to their door. Clients pay for what they want and return what they don’t.

She works with a lot of executive women, lawyers, and even, yes, Average Jo women who have trouble pulling their look together on their own.

Unless Palin tells us what she bought from Neiman Marcus and Macy’s, we’ll never know. But let’s just say — since it was on the campaign dime — she bought work clothes.

From the looks of what the veep candidate has been wearing on the campaign trail, Leum estimates Palin’s Neiman Marcus spree yielded her between 15 and 30 full-on suit-outfits (estimating that each costs between $2,500 and $5,000).  Add a couple more suits or a bunch of shoes from Macy’s for the rest ($9,500).

Leum says, in her estimation, women in politics do themselves a disservice by not showing more of their personalities, and that goes for Palin, too.

She is curious about Palin’s style, which she calls the “naughty librarian look.”

“Palin’s a beautiful woman. She’s young with great features,” says Leum. “We’d like to see her more contemporary. If what you’re trying to do is find ways of connecting with people across the U.S., one way to do that is to jump in and wear what they wear. (Palin’s) trying too hard to stay really conservative. She’s young and partnered with somebody older. She could pull off a neater, clean style that could step up her look.”

For starters, Leum suggests Palin could update her look by wearing pants. She doesn’t think she’s ever seen Palin in anything but a skirt (and jacket, of course).

By the way, Leum wants to make it clear her critique of Palin isn’t political. She’s got the same advice for male and/or Democratic politicians who are similarly lackluster.

“There’s no wow factor,” says Leum. “No head turning. Men and women politicians don’t want to wear something that will be a lightning rod for the public, but not doing that doesn’t show personality.”

Another Twin Cities style maven, Mall of America trend specialist Sara Rogers, has a different take on Palin — starting with the skirts.

“She does gravitate to pencil skirts,” says Rogers. “She has a signature style, and I think she’s doing a great job, even with her glasses. You can see her face. Many people make the mistake of picking the wrong frames.”

“Being around somebody like Cindy, who knows about tailoring and has had an opportunity to work with fabulous designers like Oscar de la Renta — known to dress first ladies of the past — I’m sure she has shared some of that insight with Sarah.”

So, has the governor of Alaska started wearing Oscar de la Renta?

“I couldn’t tell you what label she’s wearing when I saw her at the RNC or on the stump,” says Rogers. “That’s a good thing. There’s always controversy over how much (a politician) spends.”