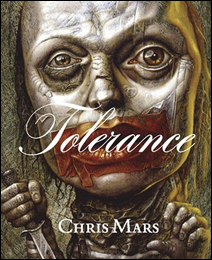 Not once in his 3,000-word introduction to Chris Mars‘ new monograph, “Tolerance,” does art critic Julius Marcia mention the fact that Mars was co-founder of one of the most influential rock bands of all time, the Replacements. For good reason: Mars has moved on, and with great flourish.

What Marcia does do is compare Mars’ work to the likes of Edvard Munch, Otto Dix, and Joel-Peter Witkin, characterizing the Minneapolis native as “a driven artist with a strikingly personal and downright naked willingness to expose himself to his viewer — the emotional self, the intellectual self —  with a conscious decision to reveal the subconscious for better or worse; seeking to turn that most instinctual reaction from fear and repulsion to curiosity.”

At this juncture in his career, it’s no exaggeration to laud Mars as arguably the most accomplished visual artist living and working in the Twin Cities. His work fetches thousands of dollars, and it has been featured in solo exhibitions at Billy Shire Fine Arts, the Erie Art Museum, the Minneapolis Institute of Arts, the Steensland Museum and the Coker Bell Gallery. “Tolerance” is the latest collection from an incredibly prolific artist who, from all appearances, may just be getting started. Mars took time to chat via email — his preferred form of interview these days — about his painting process, life, and the recent presidential election.

MinnPost: What do you think Obama’s victory will mean for you as an artist, and in the art world in general?

Chris Mars: I can’t yet determine what it will mean to me as an artist, but to me as a person, it means relief, pride, joy, and restored faith in my country. Sometimes throughout the day, it will hit me what just happened. It almost seems like a dream.  When I think about what we’ve been through these last eight years, and now all the possibilities that are before us … it’s incredible.

MP: When we first met, you were in ninth grade and already drawing at a pretty high level. You were also, as you write about so beautifully in “Tolerance,” dealing with your brother Joe’s institutionalization for schizophrenia. How were the two connected?

CM: At that time I was probably unaware that I was dealing with my brother’s illness, though deep down it affected me. There was ignorance, denial and misunderstanding pertaining to what my brother was, episodically, going through. My brother was smart, funny, loved fishing and would help me with various mechanical difficulties arising from small engine (mis)adventures — go carts, mini-bikes, etc. He was the eldest of the boys. He lifted weights and kept in shape. He would always be there to help. He had — and has — a big heart. He was and is a good brother who cared and still cares about his whole family. Starting well before ninth grade it was wrenching to watch him suffer through episodes of his illness. I was connected to Joe. For good chunks of time he was institutionalized. I missed him, we all missed him. There was sadness and loss. There was also fear that if it could happen to someone so close to me, it could also happen to me. I imagined how depressed, how frightened and embarrassed he must have felt. There was such a lack of understanding and so much shoving it under the rug that even by ninth grade, I had yet to grasp the nature of his troubles.

MP: Do you still fear that “what happened to someone so close … could happen to me”? My family history is loaded with mental illness, etc., so I know a little about some of the demons. Hopefully as we get older we learn to deal, i.e. channel the harpies into something like your artwork.

CM: Later on, identifying that fear indeed was a prevalent component, and then dissecting the cause went a long way towards arriving at a more insightful place. Painting for me has proven a therapeutic avenue towards self-discovery that has turned fear into understanding. This also speaks to the broader message of the book (and my work generally): How fear can manipulate, as an example, the masses of one country to slaughter the masses of another.

MP: “Tolerance” is an amazing collection. Your empathy for the mentally ill, the outsider, the misfit, the voiceless in all of us is truly moving. Empathy has been in short supply in recent years; have you ruminated on where you got yours and why it has remained so strong?

CM: It absolutely starts with my brother Joe. The bright thing about it is that through the therapeutic examination of my relationship to Joe that painting has offered me, I’ve been led to a stronger awareness of the various brands of suffering and stigmatization that exist on scales small and large; the ignorance and denial that is prevalent, but also the many great deeds that those of conscience can accomplish toward bettering the world.

MP: In terms of finding your way as an artist, what were you like as a kid?

CM: As a younger kid my nature was generally mischievous. I remember suffering from some periodic bouts of depression as early as third grade. If I look back it does coincide with the beginning of my brother’s troubles. I assume there could be a connection there. I loved summer and hated the start of the school year. When I was feeling good, I loved to draw. I got in trouble at school for drawing when, and on things that, I shouldn’t have been. In second grade I was pulled down to the principal’s office. I was trying to figure out what bad thing I did that I’d forgotten. When I got there I was praised for some drawings of mine they had pulled aside.

MP: Do you see yourself in other kids these days?

CM: I have twin nephews, about 13. They both embody the drive and skill akin to what I remember I had. I’ve watched it innately within them from very early on. Quite exciting to see it develop. It’s like witnessing how I might have been times two.

CM: Yes. They are interested in animation, but I think they love drawing the most.

MP: How many hours a week do you paint?

MP: Praise and criticism are part of the artist’s life. You obviously do your work first and foremost for yourself, but do you have muses — people who know and love you and/or your work — that you respect and whose opinion you trust?

CM: I can be my own harshest critic. [Mars’ wife] Sally’s feedback is wonderfully constructive. I am grateful that she never sugarcoats her opinion about a painting. Because of this, when I’m nailing it, I know right away by her reaction. I have a good instinct for when I’m in the zone and Sally has a great sense and a great eye, so I always appreciate her take on it.

MP: Do you come up with a title for a painting first, or does it reveal itself to you as you work?

CM: It reveals itself as I work. Every time I dive in with preconceived notions, everything strays off down an avenue of its own.

MP: What advice have you heard or read from other artists that you’ve embraced, and would want to pass on to younger artists?

CM: To try to get to that place inside you where your own voice lives and then feed it so it grows.

CM: Very rarely to music — I find it distracting. If at all, jazz or classical, but most often blabbering talk on the radio or books on tape; silence at times as well.

MP: For all the macabre and chaotic scenes you create, works such as “Stirring of the Peace Witch” and “Sanctuary” suggest they were created from a more peaceful place. True?

CM: Yes. Regardless of how the painting may appear in the end, the act of making it is, for me, a peaceful act.

MP: Do you consider your work to be beautiful?

MP: When we last talked, you told me about young artists like yourself who are part of a scene, or art movement, that’s creating excitement and new momentum within the art world. Is there a name for it, and who are some of the other artists that are part of it?

CM: There are a few names for it. Low Brow, Outsider Art, Pop Surrealism. Some of the artists are Joe Coleman, Mark Ryden, Marion Peck, R. Crumb, Zdzislaw Beksinski (a favorite), Robert Williams and Sue Coe, to name a few.

MP: What contemporary artists do you admire?

CM: Zdzislaw Beksinski, Joel-Peter Witkin, Joe Colemen, others I’ve mentioned above and many more I am leaving out. Recently, Diane Arbus, Ivan Albright, George Grosz, and I love Otto Dix.

MP: I clicked past an episode of “The Beverly Hillbillies” the other night, and I swear they were aping the Diane Arbus giant-in-Brooklyn apartment photo. What is it about Arbus that you appreciate?

CM: She had a rare ability to depict a side of humanity that resided beneath various societal masks. She penetrated these veneers in a wonderfully unique way.

MP: I know you’re a Salvador Dali fan. What is it about him, his art, and life that you relate most to?

CM: What I admire most about Dali is his technical control of his medium. His detail, his composition and especially his use of color are outstanding.

MP: Mike Wallace interviewed him in 1958, and introduced him as a “surrealist.” A lot has happened since then. Most every artist could describe themselves that way these days. How would you describe yourself?

CM: Social Expressionist. Looking out at the world, taking it in, and expelling it through my personal filter.

MP: Wallace also asked Dali, “What does any painter contribute to the world?” I’ll ask the same of you.

CM: Generosity. The fact that someone does it, or has done it, when they could be doing so many other things … for me, since I enjoy art, I consider that a generous act.

MP: Step back for a minute and try to connect the dots between all the things you’ve created thus far. You’ve drummed, sang, written and recorded songs, drawn and painted. Is there a common thread that runs through all of it? If all your works from different periods were in the same room together at the same time, what would they say to each other?

CM: “Here we all are, though I think we can all agree that our curiosity and attention rests on who will be joining us when we meet at a future date.”

MP: The sort of play that is the lifeblood of creativity too often gets siphoned out of many adults, but not you. How have you maintained that sense of play?

CM: I don’t think I have much choice in the matter. Once I begin to paint, it is as if time rapidly accelerates. The painting pulls me more than I pull it. Eight p.m. becomes 11 p.m. in an hour. At the end of a stint it feels as though I am on some kind of opiate. I love it and it remains a mystery to me. I never work from a study so the process is very spontaneous. I never know quite where it will lead me. The color, surface texture, how I feel about the world and the message I leave — or find — within the painting is a never-ending source of excitement.