It doesn’t seem quite logical, but when the economy goes down, applications to graduate school programs go up. I’m not talking about practical career changes or MBA programs. (Although those lately seem like the true waste of time.) I’m talking fine-arts programs. Somehow unemployment, pessimism and general financial panic leads a certain slice of the population to consider pursuing financially unadvisable, but deeply satisfying, creative avenues — like writing.

This fall, Minnesota’s creative-writing programs are seeing more applications coming in, and they’re coming in well ahead of deadlines. “One thing I have noticed so far this year is that people are querying much earlier than usual, and they are sending in full applications earlier,” said Richard Robbins, director of creative writing at Minnesota State University in Mankato. The deadline for admissions to this popular MFA program is Feb. 1, and most writers are notorious procrastinators. Make what you will of this observation.

Another, perhaps less competitive, option: Normandale Community College is offering a new associate in arts degree in creative writing this year, hoping to lure wishful writers with star professor Thomas Maltman (“The Night Birds”). The application’s FAQ optimistically suggests a few careers this degree might prepare you for: proofreader or editor, freelance writer and blogger. This is why you look at the bargain-priced two-year degree in the first place.

But then there’s the dream, right? “Deep down, I think every student in every creative-writing program secretly hopes that they’ll write the book that sells. That’s why they’re here. They’re hoping that this degree will lead to a book deal,” says Amy Shearn, who was one recent graduate of the University of Minnesota’s creative-writing MFA program to actually pull off the coveted book deal. She visited with the program’s current students this fall, and thought everyone seemed a little star-struck, and a little hungry, wanting to know how, exactly, she’d pulled it off. 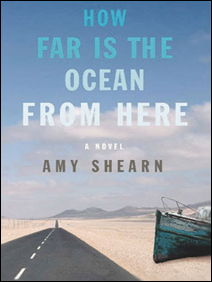 Good timing on novel’s topic
Shearn’s novel, “How Far Is the Ocean From Here,” out now, sold within a few weeks, she said. She actually wrote the book the year after she’d completed the MFA program, finishing it within a year, and sent it to an agent just as pregnancies were the hot topic in Hollywood. Good timing. “Ocean” is rather grim compared to “Knocked Up,” “Juno,” and “Baby Mama,” but shares those stories’ convoluted family-making process. Shearn adds another twist by sending Susannah Prue, her pregnant surrogate-mother protagonist, on a road trip into the desert. She ends up at a motel populated by oddballs while the parents of the baby she’s carrying chase her, hoping to beat the (biological) clock.

She came cross-country herself to attend the U’s program, during an earlier economic downturn, fleeing New York City after the 9/11 attacks on the World Trade Center. “After college, I’d gone to New York and I was temping, just working all these dead-end office jobs, and my boyfriend [now husband] was temping, too, and it just so happens that he was temping in the World Trade Center,” she says. “It was awful and it really shook us. We just looked at our life and said, ‘What on earth are we doing here? We have got to get out.'” Enter sunny Minnesota and grad school, antidote to all that, a three-year hiatus from the deeply troubling real world.

Although the novel was bought by an imprint of Crown Publishing, and Shearn is working on a second novel, she’s not yet making a living as a novelist. So nix that part of the dream. But she’s also doing better than your average blogger, with a day job as an online editor back in New York. She expecting her first child this spring, and unlike Susannah, the baby’s all hers and she’s keeping it.