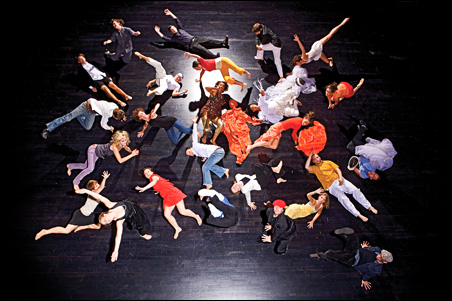 Photo by Cameron Wittig
The dancers of Choreographers’ Evening.

It’s an annual Thanksgiving tradition within the Twin Cities dance community: Choreographers’ Evening. For 35 years, the Walker Art Center has sponsored this post-Thanksgiving smorgasbord of emerging and mature talent from across the dance spectrum.

Once in a while, there’s even a breakout that causes a hullabaloo – as in 2003, when the then-all-boy tap group 10FootFive stormed the stage, causing girls and women of all ages to erupt from their testosterone-induced swoons in giddy screaming (take that, pre-teen denizens of pseudo-vampire Robert Pattinson; those boys’ bark was way worse than their bite, and they could dance!)

Hard to tell from this year’s roster who potential breakout talent might be. Sally Rousse is this show’s curator. And the ballerina and co-founder of James Sewell Ballet (JSB) isn’t herself one to be pigeonholed. She frequently collaborates with the pomo crowd, and she choreographed a brilliant aerial work about autism, “Trick Pony,” with New York artist Chelsea Bacon a few years back.

Go here to review a clip from Rousse’s “Polyvinyl Swan.”

Along with the majestic Mary Easter, Maggie Bergeron’s young group will perform – Bergeron’s trio during Choreographers’ Evening a few years back was a knockout. Relative unknowns Tamin Totzke and Dustin Haug, and Pramila Vasudevan will show work. Also on the program is the premiere of the Battlecats’ new hip-hop piece, which wasn’t performed during the Minnesota Shubert Center’s “Hip Hop Dance: From the Streets to the Stage” because of dancer injury.