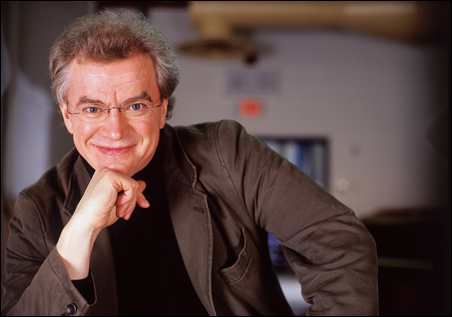 The 19th century Austrian composer Anton Bruckner was an intensely religious man who wrote massive, spiritually meditative symphonies that were nevertheless bold enough to make him a descendent of Beethoven, a cohort of Wagner and a mentor to Mahler. His detractors claimed he was too much in thrall to the priests of St. Florian — a monastery outside Vienna where he is now buried beneath his favorite pipe organ. Bruckner was, in short, a man who frequently wrote music meant to be played in church. On Friday night, the Minnesota Orchestra will honor that intent by performing one of his most popular compositions, his “Romantic” Symphony No. 4, inside the Cathedral of St. Paul.

“People either loved or hated Bruckner’s music. It seems to be some kind of turning point for many people, where they either jump in or don’t want to hear one note,” says Minnesota Orchestra Music Director Osmo Vänskä. Two years ago, Vänskä jumped in, announcing that the orchestra would perform all 10 of Bruckner’s symphonies over the next decade. Adding to the ambition of the project, Vänskä has followed up the opening performances of the Bruckner symphonies at Orchestra Hall (in this case at 11 a.m. Thursday, Nov. 13) with treks across the river to reprise the music at the cathedral (8 p.m. Friday, Nov. 14).

“What we have to remember about Bruckner is that he was an organist who wanted to play in the church his whole life. He was a very honest composer who wanted to write music that was important to him. [So] the sound that came out of his organ, he wanted to write that for an orchestra,” the conductor explains.

Different spaces, different effect
But Vänskä knows that the more refined acoustics of a concert hall also do justice to Bruckner’s work, albeit in a different manner from the rewards of hearing him in a church. “If one would like to hear a more normal concert music performance, they should go to Orchestra Hall. [But] if they want to go really more for the feeling, beyond the notes, the place is the cathedral. You don’t hear the details — you are more inside the music and there are echoes both longer and shorter [in the acoustics of the church] that might give you some emotional feelings you would never get in a concert hall.”

Even as someone with very little experience with organized religion — the bulk of my trips to houses of worship involve weddings or funerals — I can attest to the majesty of the St. Paul Cathedral space. It is one of the most beguiling and yet soothing places in Minnesota, with an ambiance not unlike the deep woods. This is conceptually in sync with the nature subtext in the “Romantic” (there are references to sunrises and hunting parties in Bruckner’s notes, making the Fourth one of his more programmatic pieces of music). But beyond that, in terms of pure tactile sensation, I’m excited to hear how the symphony’s spirited scherzo ricochets around the cathedral caverns and, as Vänskä says, envelopes the audience in the music.

Along with the unique cathedral space, Friday’s concert contains two other enticements. The orchestra will be playing a newly revised version of Bruckner’s Fourth that Vänskä believes is the most accurate rendition of the composer’s final intentions for the piece. (Many of Bruckner’s works were frequently revised after he first published them, a circumstance variously blamed on the chicanery of his associates or his own malleability due to a lack of self-esteem and a desire to please others.) The changes are slight but obviously significant to Bruckner aficionados — the scherzo is shortened, and there is more timpani.

“I really think this version is more powerful and more personal,” Vänskä says. The bias is understandable, as the Minnesota Orchestra will make the first recording of this version for the Swedish BIS label in January.

Isserlis featured in ‘The Protecting Veil’
A more significant bonus on the program is the inclusion of John Tavener’s “The Protecting Veil,” featuring one of the world’s most accomplished cellists, Steven Isserlis, who won Gramophone magazine’s 2007 Instrumental Disc of the Year for his reinvention of Bach’s cello suites. Isserlis, who turns 50 next month, also played the world premiere of “The Protecting Veil” back in 1989. Like Bruckner, Tavener is an organist and composer profoundly influenced by his religion. His “Veil” puts the cellist as the voice of the Virgin Mary, and runs seven movements without pause for over 40 minutes.

Vänskä doesn’t think it is a coincidence that Isserlis was the one chosen to give first life to this tour de force. “Steven is one of those cellists who has strong ideas about the music and how to play very personally. It is nice to listen to him because he never copies from other players; he plays what he believes, and if no one is doing the same it doesn’t matter to him.”

For his part, Isserlis is equally complimentary of the orchestral company he will keep this week. “I think the Minnesota Orchesta is one of the ones I have played with the most. I just really like them. I like Jorga [concertmaster Jorga Fleezanis] a lot, and the whole orchestra is just really strong. I remember playing the Schumacher concerto with them, which is a real test of an orchestra — you either have it or you don’t, and they were definitely in the former category.”

‘Veil’ conducive to the cathedral setting
Vänskä and Isserlis both believe the Tavener piece is even more conducive to the cathedral setting than the Bruckner “Romantic.” “There are more long notes, so the echo [effect] is not so much. The orchestra is smaller and the piece is not as loud. It will be closer to the normal concert sound than the Bruckner,” Vänskä says. Adds Isserlis, “For this piece, I think the church is more suitable than a modern concert hall. But in either [venue] it is a piece, first of all that is very beautiful. And then there is a strong theatrical sense to it, which is very attractive; the writing is very striking.”

Put it all together and you have, as Vänskä puts it, “a chance to come out from under your everyday schedule. I think this concert is one where you can just sit there and live the music for a while. It will be a very good place for meditation.”