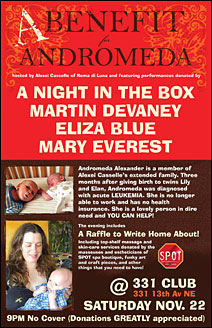 Somebody close to this column beat cancer this week; another who may not even know it exists is fighting for her life with a similar disease in a hospital in New Mexico. I got close to the latter, an insurance-less single mother of two named Andromeda, through many of her loudest friends in the T.C. music community Saturday night at a benefit at the 331 Club, the duration of which embodied, with all its dueling banjos of hope and chaos, life and death, worry and denial, black and white and gray all over, the tenor of the times better than any outing I’ve had of late.

Plenty was going on Saturday night, including the worldwide screening of a ‘tween vampire movie that anyone with a pulse should welcome, since everything I’ve heard about it suggests an expression of a certain all-ages insatiability, the kind that acknowledges that, no matter what you’ve been fed about the love you take being equal to the love you make, you will never get or give enough love because that is the nature of the human beast, and that has nothing to do with how you were raised, or how you are currently being loved or not loved by the universe, but, in my mind, everything to do with how and why you listen to music.

Again, it could just be me, but if you’re reading this, some part of you knows full well that music is the lifeblood and that love is the blood of life, and it seems to me that amid all the financial and political headlines, it is important to keep the music-love-blood axis of hope flowing and in the news, because in case you hadn’t heard, the New Hard Times is upon us, and as we board Rocket 2009 we must remain open to all the creative, spiritual, sexual, musical and artistic possibilities that have been balms to dire straits since the beginning of time.

Which reminds me. Ben Kyle and Carrie Rodriguez doing “Danny Boy” yearns with such post-election desire for a simpler land/time, you can almost hear the waves crashing. Gemma Hayes’ new one, “The Hollow of the Morning,” is a breathtaking portrait of the artist as heartbreak survivor that comes highly recommended to unsatisfied lovers all (see above). Finally, everybody — especially fans of Joseph Campbell and The Big Music — should read this, a great piece on the great Lewis Hyde, and then run out and find his 1983 book “The Gift,” which muses on the corruption-free act of gift-giving – corruption-free, that is, as long as the gift keeps moving and flowing (see above), and not necessarily bogged down with a pricetag. Happy Black Friday.

Anyway, Saturday night I ended up at the 331, where the sound system sucks and the patrons talk loudly over the musicians because they can’t hear the music unless they’re in one of the bathrooms or sitting on the stage, which is what I finally did, creeping up by the stage monitors so as to hear Martin Devaney and Kate Murray do their Bob and Joan and Johnny and June thing. www.myspace.com/martindevaneyband Lucky for me, perched as I was on that tiny cramped-with-gear stage, I became privy to, lo and behold, one of my favorite sights on earth: an al fresco of barroom faces.

Packed house, clubbers in their 20s and 30s, and a strong lesbian contingent. One boisterous young gay gal bellies up to the bar effectively but a little too dramatically, like she’s seen too many movies. Ultimately, she hits on my friend Lulu, who is convinced that one of the women near the stage is “Michele Bachmann’s daughter.” When I do my reporterly duty and, notebook and pen in hand, ask the woman to confirm or deny her Bachmann ties, she looks at me like she will tell people about me for the rest of her life. When I relay the no-neo-congresswoman’s daughter news to Lulu, she says, “Oh, well. Either way, she wasn’t very nice to the lesbians who were hitting on her.”

Kate and Martin play a terrific set, plowing through the early din of the crowd and finally making the drunk loudmouths in front swoon and sway and finally stare off into their beers – always a victory for a hard-working songwriter. When they finish, Devaney packs up his guitar and carries off his case, emblazoned with the stickers “I Play Dirty Doncha Know,” “Imagination Is More Important Than Knowledge,” and “No Depression.”

Moments later Kate draws Eclectone Records tattoos on the fellas, then the twosome steal off into the night, prompting the St. Paul songwriter and gangster of love John Swardson to comment, “The Mayor’s gotta get back to St. Paul before he turns into a pumpkin.”

A gaggle of punk rock girls press up against the stage. As they wait for the next band to set up, one of them breaks into Firefall’s “Skyrockets in Flight,” much to the chagrin of this reporter, and I tell them so. Pressed into duty, I pass guitars and cymbals up and over heads and bodies to the musicians on stage, and am reminded of Dan Corrigan’s Facebook status earlier in the night: “Dan Corrigan is schlepping gear and grateful for it.”

Mary Everest, clad in what could be the latest trend in full-on midwinter pajama wear, takes the stage with her all-star band. Mary weeps, Eliza Blue cooks, and I find myself listening to the monitors and staring at the bevy of barroom shoes — Uggs, Flys, Adiddas, Nike, cowboy boots, Red Wings – that tap in semi-unison on the beer-sticky floor.

The woman standing next to me clutches a shiny purse sporting the shiny visage of shiny Audrey Hepburn in “Breakfast at Tiffany’s.” Hanging on the far wall is a blurry black and white poster of the Minneapolis skyline. Resting on stage, amidst a tangle of cords, effects boxes, tuners, beer bottles and whiskey glasses, are multiple copies of the Everest band’s eight-song set list, which concludes with “What a Great Night.”

Across the way, hovering near the same spot where, just last week, St. Paul expat and Los Angeles transplant Joanna James updated a friend on her medical and musical conditions, is a large man in a Ween baseball cap, which inspires a giddy stranger to proclaim “Ween is God! Ween is God! Ween is God!” until the too-cool-for-drool man acknowledges same and thus a new religion is born.

As the clock inches toward 2 a.m. and A Night in the Box takes the stage, a man walks out of the bar to get some fresh air. Thirteenth Street is quiet, save for the lit-up smokers hovering around the club’s street placard (“Benefit tonite! No Cover! Donations appreciated!”), and the moment demands some sort of contemplation, if not too much heavy lifting.

It is the beginning of Thanksgiving week, and the man is grateful for much, namely nights like this that make him reconsider mortality, vampires, and skyrockets in flight. He is having trouble describing it to himself, until, standing across the street from the Northeast Neighborhood Early Learning Center in the middle of the night, he finds the words written on a plate in a knickknack shop window:

“You Decide The Way You See The World.”