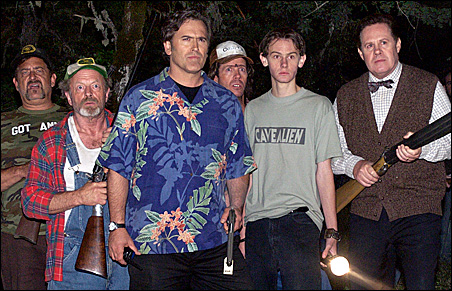 A quarter-century ago, a young, dashing, clean-shaven actor named Bruce Campbell appeared in a li’l thriller, Sam Raimi’s wild ‘n’ crazy “The Evil Dead,” and a star was a born. Or, if not a star, then a helluva fine camp/cult icon for the pre-“Scream” days when hip horror hadn’t yet given way to meta-irony, reflections of reflexivity, and allegories of Abu Ghraib, et cetera.

A long time ago, in other words — so long ago that even Campbell has gotten into the meta-game with his new self-directed self-parody “My Name Is Bruce” (which plays this weekend at Lagoon Cinema — with Campbell in attendance at six screenings!). And so long ago that a critic/teacher once somewhat knowledgeable of youth culture has taken to asking his 20-year-old college students for help in parsing the awesomeness of certain things.

“Bruce,” set in the chintzy, Podunk, inbred town of Gold Lick, has Campbell playing Bruce Campbell, a horror movie actor with zombie-like fans and not much real heroism with which to battle either his agent (played by Raimi’s brother Ted) or the orange-eyed, blade-swinging monster giant Guan-di.

As Campbell’s “Campbell” says at one point, speaking of one imbecilic movie or another, “Forget thumbs — [Roger] Ebert wouldn’t wipe with this!” So let us indeed forgo the rule of thumb here. What follows in place of a review is a suitably wacky chat, with Campbell fielding questions, serious and otherwise, including several from film freaks yet unborn when “Dead” sprang to life in ’83.

MP: Hey, I know you’ve been to Minneapolis before, but is the prospect of coming back here a bit like planning a vacation in Gold Lick?

BC: Minneapolis? No. I just came from Decatur, Illinois. Now that’s Gold Lick.

MP: OK [laughs]. So right now you’re in the car, driving from Decatur to Minneapolis.

BC: Stopping in Madison along the way.

MP: Are you driving that [junky] Mazda that your character has in the movie?

BC: Yeah [sarcastically] — with my dog, whom I’m feeding [bad] whiskey.

MP: So it’s hard making this trip to Minneapolis, right?

MP: In Minneapolis, are there, like, vice presidents of the Bruce Campbell Fan Club?

BC: I don’t do the fan club thing, really, because it’s just too embarrassing. But I do acknowledge [fans’] existence. Look, this movie was made for them — for the fans — as much as anybody else. As Fangoria put it, the movie is a love letter dipped in poison.

MP: In poison? Why? Because it’s teasing the fans a little bit?

BC: Well, you know, it’s a very sassy movie. I [make fun] of myself, so I have to take a few of the fans down with me.

MP: Sort of like Ash in “The Evil Dead” — swingin’ a chainsaw and goin’ out in a blaze o’ glory.

MP: How far can you take this [meta-movie satire thing]?

BC: Well, we’ve taken it pretty damn far. We wouldn’t want to go too much farther. Otherwise, you’ve got a lead character that’s unredeemable. I’m happy to push the envelope, however.

MP: Does that mean you’re prepping to make a costume melodrama with Helena Bonham Carter?

BC: No, I turned that down [laughs]. The third act was a little weak. 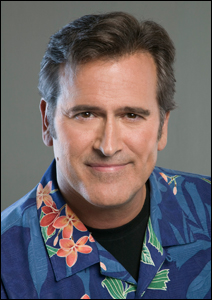 MP: Yeah. They couldn’t match your fee either, I suppose.

BC: She has coffee breath — I can’t go there.

MP: I’ll tell that to [her husband] Tim Burton.

BC: My career with Tim will be ruined!

MP: Yeah. What about your career with Sam? That’s an interesting thing, right? He’s gone straight to the top, huh? Those [“Spider-Man” sequels] are big movies, huh?

MP: So you can’t get him on the phone anymore?

BC: I speak to him through filters. When he’s on the phone, he holds a rag over the phone so I’ll never know his actual voice anymore.

BC: Next year it’ll be 30 years [ago]. It’s not even a joke anymore. It was a different lifetime. We’ve made one [“Evil Dead” movie] in each decade except the new century. But with Sam, I don’t feel like we worked together a long time ago. I always feel like it was fairly recent. He’s great. Sam is one of my homies. He’s the real deal.

MP: And his brother is in the flick.

BC: I put Ted in all my movies — to make me look subtle.

MP: Right [laughs]. Is Ted anything like Sam? Or are they opposites?

BC: They’re cut from the same cloth. But Ted is more of a performer and Sam is more of a manipulator. Sam was more interested in pulling the big levers of power. And Ted and I stayed in our own humble little world.

MP: I know that you’re very humble. I notice here in the press kit that you have been lecturing at universities. What does that involve? Are you giving dissertations on postmodernism?

BC: No, all my lectures are in three [parts]. They’re really fun to do, because you’re forcing kids to sit in a class one more time! I start by making fun of the state that I’m in, and then I make fun of the town that the university is in, looking up arcane or obscure city ordinances that we can all laugh at, and then I make fun of the school, including its founder. I particularly enjoy Carnegie-Mellon. My speech there was about how if Andrew Carnegie ran the film business, it would suck. And then I explained why.

MP: You mean because he’s a “Mellon”-head?

BC: No, because he was a very prim and proper, Goody Two Shoes guy. He was not like Spencer Tracy or Humphrey Bogart or Errol Flynn — all my favorite guys. He was too much of a [jerk].

MP: Yeah, we’ll bleep that out for MinnPost [laughs]. But you, too, are sort of a matinee idol, yeah?

BC: Well, that’s for the pundits. I consider myself strictly a thespian first, and then all the labels that other people have given me, I consider those [secondarily]. ‘Cause I have my own unique perspective.

MP: But now you’re an auteur as well! Directing yourself!

BC: I am an auteur — moving in on Sam Raimi’s territory!

BC: It’s only a problem when there’s an argument.

MP: Ha! What was the last argument you had with yourself on the set?

BC: Well, I walked off the set several times, and would not come out of my trailer. But I showed Bruce Campbell several times — I said to him, “I’ll show you how easy this really is.”

MP: I’m getting confused. So which Bruce Campbell am I talking to now?

BC: No, they’re both spelled exactly the same. And we look pretty similar.

MP: OK [laughs]. Good. Well, I’m a film studies teacher, I have kids in class who are really into your stuff. Do you have advice for aspiring independent B-horror …

BC: A lot of advice. For one thing, anyone who really wants to do something — be an actor or writer or producer — I would simply say, Get involved enough to know better, to know if you like it or not. You won’t know if you don’t try. So you’ve gotta try — for five solid years — to know if this is for you. Sometimes you gotta get on a job and work 10 or 12 hours a day — in the snow or whatever. If you survive that, and you still like [working in movies], then you’ll know that it’s for you. But some people dip their feet into it and never really dive in. You’ve gotta dive in, forget about Plan B. If you have a Plan B — if you say, I wanna be a director, but if it doesn’t work, I’ll go to law school — then I just say, Go to law school.

MP: So it doesn’t work to take gigs swinging chainsaws in movies as an actor and then maybe parlaying that as you did…

BC: There’s a lot of ways you can go. I started writing books about eight years ago, and that was never part of my repertoire before. You can expand once you get in there. The other thing I say is, Learn your craft. Because one of the most annoying things is to get an e-mail from someone who says, Bruce! I’m starting my first feature film on Monday. I’m so excited. Where can I find film? Where do I buy it? And my response is, Dude, you’re not ready.

BC: No. “Evil Dead” was a very crude, low-budget movie, but even before we did it, I was a production assistant for a year. I knew where every lab was — every sound studio, every back door, every freight elevator. I had a clue. We’d done tons of Super 8 movies in high school together — probably 50 in total, including Sam and everybody else. You gotta work it. Make a short film first. Don’t show it to anybody, ’cause it’ll suck — then make another one right away. Build yourself up to the 90-minute storytelling length. Learn how to write!

MP: And if Hollywood doesn’t work out, there’s always Decatur.

BC: Decatur is always a possibility, yeah. You can work in the soybean capital of the world.

MP: What do you expect in Minneapolis [this weekend]? It’s bigger than Decatur. It’s bolder.

BC: It’s always fun. People in [the Midwest] enjoy humor because their noses are getting frostbite —  they gotta laugh about something. There’s a little more of that going on. I’ve found it to be a little more jolly [in the Midwest], oddly, than in your Tampas and Miamis of the world.

MP: If it’s not below zero in the cold part of the world where you’re speaking, then anything is funny.

BC: Right! Minneapolis is gonna be fun. I’m gonna be there three nights and do a Q&A after each of the [evening] shows — the 7-ish and 9-ish shows. I’ll do a spirited Q&A and answer all the “Evil Dead 4” questions.

MP: “Spirited” means you’re gonna be hitting the sauce? Sipping that canine cologne from the movie?

MP: Did anybody — a fan — ever ask you to sign his head? Or some other body part, God forbid?

BC: In Austin alone, I think I signed eight appendages — for tattooing.

MP: What is that really like? Be honest! Must be a trip having somebody want to carve your signage on their actual person like that.

BC: Tattoos aren’t cheap. The winner so far is the guy whose entire back is [a tattoo of] the poster for “Army of Darkness.”

MP: What does it do to you? Do you have to be in therapy to deal with that?

BC: No! I think it’s hilarious, entertaining, impressive as hell. I wanted to get the guy’s e-mail address so I could send him release date updates to put on his back. “My Name is Bruce” on Blu-Ray, February 9″ or whatever.

MP: That’s the next frontier of marketing — putting the billboard on people’s heads.

BC: Peddling the flesh, yeah. You know, I don’t have the career that Tom Cruise has, but then no one is tattooing “Risky Business” on his back.

For more information about Bruce Campbell, visit www.bruce-campbell.com. For advance tickets to the “Bruce” screenings at Lagoon, visit www.landmarktheatres.com.