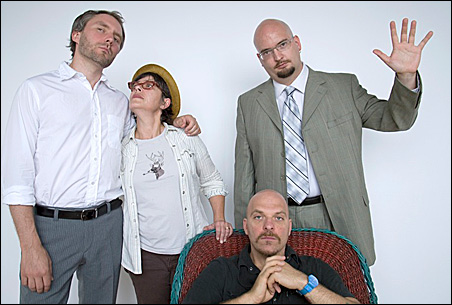 Photo by Michael Dvorak
The Bad Plus with Wendy Lewis. From left to right: Reid Anderson, Lewis, Dave King (seated) and Ethan Iverson.

Christmastime in the twin towns means “The Nutcracker,” “Black Nativity,” “A Christmas Carol” — and The Bad Plus. Since 2000, TBP have closed out their year by playing several nights at the Dakota. This year’s dates are Friday through Monday, Dec. 26-29.

Pianist Ethan Iverson, bassist Reid Anderson and drummer Dave King all grew up in the Midwest (Iverson in Wisconsin; Anderson and King in Minneapolis). King is the only one who still lives here.

Most years they have a new CD to play from. Last year it was “Prog,” which Billboard called “easily the most likable and listenable jazz album of 2007,” infuriating jazz critics and not for the first time. Whether TBP is a jazz trio, whether they represent a new direction in jazz, or whether they’re jazz assassins has been widely debated.

From their first major release on Columbia, “These Are the Vistas” (2003), TBP has been controversial. They play original tunes and covers — of Nirvana (“Smells Like Teen Spirit”), Black Sabbath (“Iron Man”), Burt Bacharach (“This Guy’s in Love with You”). They pull tunes apart and smash them back together. They don’t swing.

Their new CD, the cryptically named “For All I Care” (apathy or passion?), features a vocalist — alt-rocker Wendy Lewis. And it’s all covers, this time of rock tunes and contemporary classical music. It won’t be released in the states until February but will be previewed at the Dakota. There will be a CD release show in Minneapolis, probably in March, venue TBD.

MinnPost caught up with King last Sunday at the Artists’ Quarter in St. Paul, where he was playing with Happy Apple, one of his numerous other bands. (Happy Apple saxophonist Michael Lewis is Wendy Lewis’ nephew.)

MinnPost: Why a singer? Why Wendy Lewis?

Dave King: We felt like it was time to collaborate with someone, and we thought we might as well go all the way and make a record with vocals. We were looking at singers and thinking about asking some star-type people, but then we decided we’d end up being the backing band, and the whole idea was, this is a guest for us. We talked about Tom Jones … we talked about Darryl Hall. Then we thought, we’ve gotta get someone who can deal with this kind of crazy music. I had played with Wendy years ago. Reid was a fan of her music. She ended up working beautifully.

MP: So this isn’t a response to “is the Bad Plus jazz or not”?

MP: How did you choose the songs for the new CD?

DK: We all chimed in with different ideas from different genres and decades. … I picked “Barracuda” [by the rock band Heart] and also “New Year’s Day” [U2] and “Blue Velvet” [Bobby Vinton], two extra tracks that will be released on iTunes and on vinyl.

MP: Since you’re not releasing the CD until February, what will you do at the Dakota?

DK: Wendy’s going to come up and sing one song on Friday and Saturday. We’ll be doing new music, stuff we haven’t played in a while, and the classical music. New stuff that’s not on this record but will be on the next one. Our next record will be all original instrumental recordings, no covers.

MP: What, no Wendy on Sunday and Monday?

DK: You’ll be more surprised then. We’ll definitely put on a show.

MP: What keeps you in Minneapolis?

DK: My wife and I were raised here. We were living in L.A. for a while and came back — we have family here. We love Minneapolis-St. Paul. … This city is one that people watch. If you say you’re from Minneapolis, people go, “Yeah, that’s a great music city.”

P.S. Another must-see show this weekend: pianist Bill Carrothers at the Artists’ Quarter. Friday-Saturday, Dec. 26-27, 9 p.m. ($10). Check out a video from his last visit.