BESTS AND BUSTS
An opinionated look at the week in live music, Dec. 5-11

Gig of the week 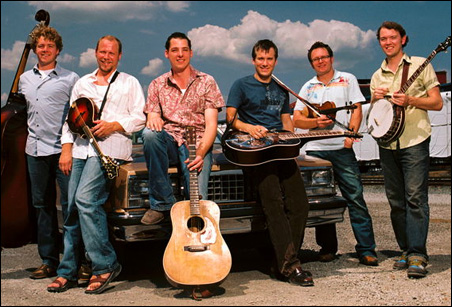 Nashville is justifiably regarded as the Wal-Mart of country music, hawking highly functional dreck and dross for the undiscerning hordes. Session musicians are justifiably regarded as technically advanced mercenaries, who will string up a banjo or a kitten if the price is right. So you can imagine the caliber of soulless heathens who lurk among teeming cadre of Nashville session musicians.

The Infamous Stringdusters raze most of those stereotypes, even as they purvey a brand of music that isn’t exactly bluegrass, or “newgrass,” or “jamgrass.” But whatever you want to call this slightly glitzy, countrified pickin’ and yearnin’, they’re makin’ hay with it. To the consternation of those tracing their family trees for signs of Bill Monroe or the Stanley Brothers, the ‘dusters debut bagged Album of the Year, Song of the Year and Best Emerging Artist awards from the International Bluegrass Music Association last year.

The sextet’s latest, self-titled disc, released in June on the Sugar Hill label, is just as good and unclassifiable as the first one. “Glass Elevator” by banjo player Chris Pandolfi is a giddyup string romp as invigorating as the debut’s “40 West” or “Moon Man.” “Three Days In July,” a gothic Civil War narrative, is as riveting as last time’s “Tragic Life,” when that cowboy was shot in the back. “The Way I See You Now” is a wistful number that could be played on straight country radio, and “I Wonder” is indeed wonderful down-in-the-holler moaning and lick-trading.

The Infamous Stringdusters performing “I Wonder” live on October 26, 2008, at the Holly Inn in Mount Holly Springs, PA.

These Infamous Stringdusters sport three excellent singers who can lead or harmonize, and at least three strong songwriters. There’s dobro in the mix of banjo, fiddle, bass, mandolin and guitar, and fans of the Seldom Scene or Ricky Skaggs might think they recognize the braid of riffs. It’s as if that end table you bought at Wal-Mart is threatening to become a family heirloom.

Stellar jazz on both sides of the river

Many people reflexively cite Coryell as the fusion jazz guitar god with The Eleventh House, frying brains like purple microdot with his electric guitar chords. Personally, I think that phase of his career (now more than 35 years old) is overrated, especially when compared to the fiery bop and sublime Latin-oriented stuff he keeps unfurling on recent records.

His latest, “Impressions: The New York Sessions” on Chesky, is an organ trio outing that, true to its word, covers ‘Trane’s “Impressions” along with standards such as “Come Rain or Come Shine” and “Embraceable You,” and Coryell’s own tribute to Hungarian folk-jazz guitarist Gabor Szabo, “Szabodar.” Who knows which ways Coryell will veer at the AQ? He’ll have B-3 organist Joe Bagg in tow, which would augur for the newer trio material.

But on the drums is powerhouse Alphonse Mouzon, who tore it up with Coryell in his Eleventh House days (and also played with Weather Report and McCoy Tyner, among others), so those expecting fusion pyrotechnics aren’t likely to be disappointed.

Pamela Espeland covers James Carter at the Dakota elsewhere on this site, so I’ll just briefly say that I’ve seen this debonair multi-reedman blow a single note for more than 10 minutes (via circular breathing) at the old Dakota and watched him batten down a classic soul-jazz jam with his own organ trio a couple years back at the new Dakota. Put simply, he’s got the chops and the imagination to ramble through a potpourri of genres while making each flavor of the moment memorably lush and distinctive.

For the sake of tradition … and nothing else

I’ve caught three or four of the previous 28 gigs when Curtiss A has worked to conjure the spirit of the most artistic, rock-centric Beatle. I’ll give him credit for hewing to Lennon’s passionate embrace of rock’s fundamental roots, for coming up with new wrinkles, and for reminding us every year what we lost when Mark Chapman snuffed a gentle genius who seemed to continually be shedding skins and emerging fresh from his cocoon. Allow me to say this and I’ll forever hold my peace: While the event is a great chance for old friends to catch up, the music itself is frequently strained, earnest wankery.

Caetano’s kid is worth the listen

A Brazilian trio cleverly like to confuse their identity by featuring one of their ranks on each album and affixing “+2” after their name. This time out it is Kassin’s turn, so the band is known as Kassin +2. Ignore this pretension and check the wonderful samba/electronica hybrid they concoct. One of the three is Moreno Veloso, son of the legendary Caetano Veloso, mainstay of the Tropicalismo artistic movement, occasionally referred to as the Bob Dylan of Brazil. Moreno has simultaneously veered away from that Tropicalismo hype while embracing the artistic genre-splicing at the heart of the movement. Good show.