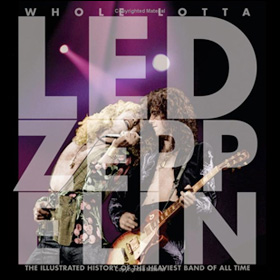 When Jon Bream reads at in-store appearances for his new book “Whole Lotta Led Zeppelin: The Illustrated History of the Heaviest Band of All Time” tonight (7:30, Border’s Books in Richfield) and Saturday (2 p.m., Barnes & Noble in Maplewood), he will experience in all its glory the rock ‘n’ roll animal known as the Zep fanatic.

“I did three [readings] in Massachusetts, and [three] in the Twin Cities, and seven more coming up,” says Bream, the Star Tribune’s chief pop music critic since 1974. “The thing that has amazed me most is how the Zep fanatics come out of the woodwork. At all of the in-stores in the Twin Cities, there have been people there who saw Zeppelin at the Guthrie in ’69, and there were only 1,300 people there.

“Then there was one guy who comes up at an in-store who had a violin bow he got from Jimmy Page at a Firm concert. He was standing in the front row, and Page handed him the bow at the end of the show. The guy has it in a case, and he pulls it out and unscrews the bow and unscrews the parts and shows me how it works. I mean, this guy has more gray hair than I do, and he’s wearing a Led Zeppelin T-shirt, and then he pulls out a photo book by Neil Preston, and every photo of Jon Paul Jones is signed. Twelve photos.”

To be sure, serious music fanaticism can take on all sorts of incarnations, but Zeppelin worshippers may have carved out an entire rabbit-hole wing unto themselves.

“In Boston, there was a dude sitting in the front row who looks like one of those weird lonely street people,” says Bream. “I sign the book for him, and he says, `This is for my friend Alexander in Russia.’ Then he hands me a crumpled-up envelope with my name on it, and I open it the next day and it’s an eight-page hand-written letter. But it wasn’t that wacko, he’s just a big music fan and he wrote this thing about an oldies station he used to listen to. It’s just these loners who are obsessed with music; they come out for these things.”

Memories at Met Center
Few know better about “these things” than Bream, who has chronicled music and its fandom longer than any other daily music reporter in the country save for one. His breezy introduction to the book recalls the time he sat in the front row of a Zep concert at the old Met Center in Bloomington and heard “Stairway to Heaven.” Likewise, the coffee-table book is chock-full of bits from the pages of ’70s bibles Crawdaddy and Creem, which the book resembles in style and spirit.

“I think the energy, rhythm, and text of the book reflects Zeppelin itself because it’s overkill,” says Bream. “It’s a combination of overkill and art at the same time. We wanted it to scream at you and hit you over the head and let you feel it in its full glory. That’s why there’s so much color and energy and attitude in the book.”

There’s also plenty of good new information — even to a rock vet like Bream.

“People ask me if there’s anything I learned from doing the book, and one thing I had no idea about was what a savvy businessman Jimmy Page was,” he says. “As a teenager, Page was a studio guitarist. He played on ‘Sunshine Superman’ (by Donovan), ‘It’s Not Unusual’ (by Tom Jones), Kinks songs, Who songs. You look at his list of songs, and they’re all classic rock hits.

“Then he was in the Yardbirds, when he was in his late teens and early 20s. So when he started Led Zeppelin, he paid for the recording of the first album all by himself. He hand-picked Atlantic Records for their label. And as a new act, they wanted to take away or share the publishing, but he said `No. We keep the publishing. We want to be our own publisher.’

“Because of that, they ended up keeping their own publishing. Fast-forward to today. What do you think ‘Stairway To Heaven’ is worth to them because they kept the publishing all these years? It’s like three million radio spins, three million copies of “Led Zeppelin IV” sold in the States. So the estimate, from a financial website earlier this year, is $562 million they made off of that song. Whole lotta what?”