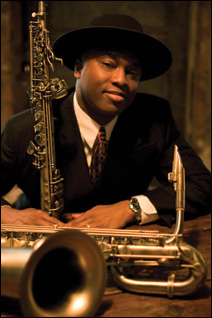 In 2005, Billie Holiday came to James Carter in a sepia-toned dream.

“It was a club, pretty much closing up,” he remembers, “and in there, still hanging out by the piano, was Billie Holiday. Billie was ‘Hey, James, how you doin’? I heard you need a tune for your friend Nita.’ ”

She sang a few phrases and said, “That’s all I’m giving you.”

“Then it got real white and I woke up,” Carter says, speaking by phone from Detroit, where he was visiting family for the holidays. He wrote down what he had heard in his dream and took it from there.

“Sussa Nita” (“sussa” means “sister”) is the fourth track on his latest CD, “Present Tense.” Released in May, it’s the reason for his current tour and two-night stay at the Dakota on Tuesday and Wednesday (Dec. 9-10).

If you haven’t seen Carter live and plan to go, here’s what you’re in for. He might come through the curtain blowing so hard you’ll wish you were tied to your chair. Later he’ll play a ballad so romantic you’ll want to cry. A virtuoso on several instruments, he’ll move from soprano to tenor and baritone saxophones, bass clarinet and flute. If you happen to bring an instrument of your own to the club, hide it.

His playing will be powerful, soulful, swinging and joyful. Amazing sounds will come out of his horn(s) — booms, whistles, honks and whispers, taunts and teases. Sometimes he’ll seem so full of music he can’t get the notes out fast enough; other times he’ll take it slow and cool. He will enjoy himself on stage. James Carter loves to play.

Here’s a video from the North Sea Jazz Festival in November with the same group he’ll bring to the Dakota.

Growing up in Motor City
It started in the late 1970s, when he was the youngest of five children in a musical family in Detroit. Charles Green, a horn player with James’s older brother’s soul band, boarded with the Carters for a while and brought his instruments. James fell in love with a Selmer Mark VI alto sax. He would sneak upstairs when Green wasn’t around, take it out of its case, and pose with it in front of a full-length mirror.

One day Green caught him red-handed, then went downstairs and told his parents, “I think James wants to play saxophone.”

Another brother introduced him to Donald Washington, whom Carter now calls “my musical father” or the affectionate “Pops” for short. Washington was a teacher with the Detroit public schools. In private lessons on Saturdays, for which he charged $5 no matter how many hours a lesson ran, he taught Carter about music, technique and methods, the history of jazz, and the importance of having your own personality as a musician.

Washington was Carter’s Berklee and Juilliard and Manhattan School of Music. He now lives in Minneapolis (his son is the drummer Kevin Washington) and will likely join his star pupil on stage at the Dakota. “I’ve always left that open,” Carter says. “It’s a great clambake whenever it happens.”

New York and success
At 21, Carter moved to New York, was hired by trumpeter and bandleader Lester Bowie, and hit the ground running. As Thom Jurek wrote for All Music Guide, “After Wynton Marsalis, no one caused more of an uproar than James Carter did when he appeared on the New York jazz scene from his native Detroit.”

Between 1993 and 2000, he made six acclaimed recordings under his name. “Present Tense” is his 12th CD, released on Universal/Emarcy at a time when most labels are dropping jazz musicians or shutting down.

It’s possible that Universal/Emarcy is hoping Carter will do for it what Wynton Marsalis did for Columbia in the 1980s. In 1983, Marsalis made history as the first artist to win both jazz and classical Grammys. In 2003, Carter premiered a classical work, “Concerto for Saxophones,” commissioned for him by the Detroit Symphony Orchestra and composed by Roberto Sierra. Reviews were ecstatic.

Sierra has since written another piece for Carter and his cousin, jazz violinist (and 2006 MacArthur Fellow) Regina Carter. A recording is in the cards. “When the time is right and everything is tight, it’ll come to pass,” James promises.

Carter has been a consistent winner or runner-up in DownBeat readers’ and critics’ polls and has twice been named Baritone Saxophonist of the Year by the Jazz Journalists Association. In 2004, he received the prestigious Dr. Alaine Locke Award for exemplary service and leadership in the promotion of African American culture.

The Dakota shows
At the Dakota, expect several songs from “Present Tense.” Produced by respected jazz writer and producer Michael Cuscuna, the new CD is, in Carter’s words, “where I am … revering the past, looking forward to the future, reveling in eclecticism.” The 10 tunes include standards and originals in many styles: Latin, post-bop, ballads, hip-hop. Track lengths range from four to eight minutes, a deliberate bid for radio play. In August the new CD reached #5 on the JazzWeek jazz albums chart.

Carter has been a young lion for so long that the milestone birthday he’ll have in January surprises him. “I never would have figured myself as being 40,” he says. Meanwhile, he looks forward to his brief visit here. “I like Minneapolis, and I see why Pops likes it, too.”

Yusef Lateef: The Grammy-winning composer/multi-instrumentalist/philosopher/educator doesn’t like the word “jazz.” He prefers to call his music “autophysiopsychic”— coming from his spiritual, physical and emotional self. He has toured and recorded with a long list of (jazz) greats, played world music before it had a name, and will stretch musical boundaries to the breaking point when he comes to the Twin Cities for what he claims is the first time (the blurb on the Walker’s website says he’s been here before). He appears with longtime collaborator/percussionist Adam Rudolph, Twin Cities-based composer/instrument builder Douglas Ewart and Art Ensemble of Chicago saxophonist Roscoe Mitchell. As I write this, the only tickets still available are standing room. Part of the Northrop Jazz Series. Walker Art Center, McGuire Theater, Saturday, Dec. 6, 8 p.m. ($35/$30 WAC members).

Butch Thompson “Jazz Originals” Holiday Show: House pianist for “A Prairie Home Companion” for 12 years and a leading authority on early jazz and ragtime, the genial Thompson will share music and stories during his Holiday Show, a perennial favorite. This year the show will be recorded at the Dakota for later broadcast. Come for the warm-up at 6 p.m., stay for the one-hour live recording that starts at 7, and linger for a final set; KBEM hints that Santa may appear. Then tune into 88.5 FM to hear yourself clapping on Sunday, Dec. 21 at 6 p.m. and again on Christmas day at 8 p.m. The Dakota, Sunday, Dec. 7, 6 p.m. ($10).