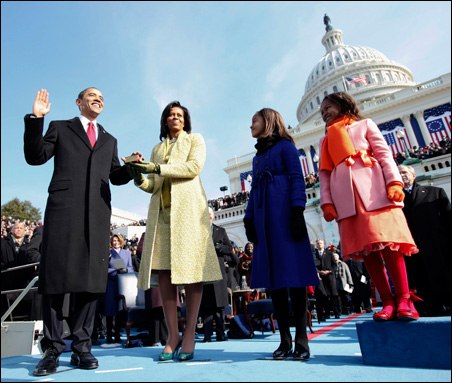 President Barack Obama. My, how sweet the sound of that.

“I never thought I’d live to see a black president” has become a familiar refrain since Barack Obama was elected president. Despite the results, I had lived in a kind of dream state since the stunning victory, almost afraid to believe. But when Obama took the oath of office Tuesday, validating his status as our nation’s 44th president, I believed.

I not only believed, I ran a gamut of emotions — tears, laughter, pensiveness, ebullience. Someone who looks like me will occupy the Oval Office for the next four years! Someone, who has the right stuff, who has helped us see ourselves as not just black, white, red, brown or yellow, but as red, white and blue — Americans all, a united community. We face an uphill climb out of the economic morass in which we find ourselves, but with the stick-to-it attitude of our forefathers and the leadership of Obama, I’m certain we can and will do it.

A gracious, classy thank-you
To say that Obama will be a different kind of president is evident in his treatment of fellow Americans. I was taken, for example, with his thank-you to the wait staff at Tuesday’s luncheon. It was gracious and classy. Perhaps the president could better identify than his predecessors with those men and women who make the lives of the wealthy and elite smooth and uncomplicated, often people with black and brown faces.

It was fitting that Inauguration Day followed on the heels of the Martin Luther King Jr. national holiday. For, as the Rev. Joseph Lowery said in his benediction Tuesday, surely the civil-rights leader is smiling in heaven at the realization of his dream for an America that looks beyond the color of  a person’s skin to the character he or she exhibits. That’s not to say racism has been vanquished, hatred overcome, but Obama’s election is a milestone.

Now when I tell my 10-year-old daughter, Whitney, that she can be anything she wants to be, even president of the United States, it will be with authority. Yes, she can.

Not so very long ago, pretty much the only career choices open to a young black woman were teacher, nurse, social worker, funeral director or, if her family could afford it, doctor. Even when I was making the decision to become a journalist in the 1970s, my mother, a social worker-turned-elementary-schoolteacher, begged me to get a minor in education. To her way of thinking, it was a sure thing in case no one wanted to hire a young black reporter.

I prevailed, and no one was prouder than my mom as I climbed the ladder in my chosen profession. But that was a long way from becoming president. Thank you, Barack Obama, for making me believe.