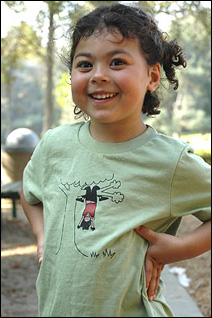 stickersisters.com
Sticker Sisters founder Ariel Fox sees the image on this T-shirt as “a symbol of accomplishment.”

Ariel Fox remembers eighth grade as the worst year of her life. She has been spreading messages ever since to help adolescent girls do what she struggled with most — staying true to oneself.

She was 13 when she began promoting empowerment for girls via girl-friendly products she designs. In a current era of buzz about cliques, back-stabbing, “mean-girl” culture and celebrity worship, girls face tough choices that many need support in order to make.

That’s why Fox prints such message as “girls can do anything,” “girl power” and “action not glamour” on the stickers, T-shirts, shoelaces, magnets, buttons, school supplies, posters and more she sells through her business called Sticker Sisters. Rather than focusing on challenges girls are up against, Fox says, she zeroes in on alternative choices.

It all began for her when her friends “were getting obsessed with makeup, impressing boys and all that pre-teen-girl, stereotypical stuff,” says Fox, who grew up in the Washington, D.C., area.  She wasn’t into it. She felt like their “improvement project” and began looking elsewhere — to zines and music she liked — for people she could relate to. That wasn’t enough. “It was just really unpleasant to feel who you are and how you feel comfortable isn’t acceptable and that you need to change.”

Now 26 and living in Los Angeles, she has been touting power messages for girls for half of her life. It’s not her day job (she works on the website for Tavis Smiley’s PBS talk show). But Sticker Sisters is her love. She picked up encouragement for her enterprise several years ago from pre-teen girls involved with Duluth-based New Moon, which sells some similar products, along with its magazine. At a New Moon event she attended, she says, “They were scraping up whatever last penny they had so they could get one more sticker.”

Messages prompt conversation, connections
She knows now she was one of many girls trying to build their adult identity. “They’re just figuring out who they are and what it means to be grown up or an adult,” she says. “Sometimes girls form just one image of that, and it seems there’s not much room for anything else. But there are lots of ways to be grown up and mature.” Customers (including moms, big sisters, aunts and grandmothers) tell her the products’ messages are conversation-starters and a connection to like-minded girls.

Among words in her magnetic poetry sets: invincible, sassy, investigate, demand, sister and activist. The bandages she creates (she calls them Brave-Girl Aids) picture a girl hanging by her legs from a branch of a tree. She sees the image as “a symbol of accomplishment,” Fox says. And rather than pink, glittery princesses waiting for someone to save them, princess images on her products depict strong, creative girls who are “figuring things out for themselves.”

Her products and the scope of her business have evolved over the years. Stickers were her only product at first. Her catalog was one sheet of paper photocopied on both sides. Now she designs and markets more than 50 products, has a website and thousands of customers. Her goal, she says, has stayed the same: “For girls to feel better about themselves, proud of who they are and glad to be a girl.”