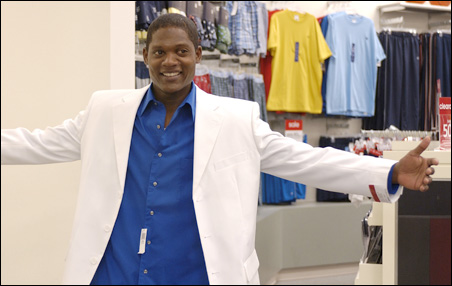 Anyone running a film festival these days has to be a bit like the titular superhero of Hitosi Matumoto’s “Big Man Japan” — a Tokyo geek who pumps up Hulk-size to fend off all manner of attacking beasts.

Just as “big man” Dai Sato stands tall against various Godzillas, the Beyond Borders Film Festival — screening Matumoto’s cult curiosity at the Parkway Theater on Saturday night — is steeling itself against blockbusters, Netflix, other festivals, a bad economy and every other reason a moviegoer might be tempted to stay home. In the face of ultra-specialized fare, the fest’s chief weapon is its desire to collapse boundaries and blur distinctions — this at a time when old definitions of “here” and “there” have been thrown in flux by Web-fueled globalization.

Beyond Borders, thus, is admirably odd and even unruly in its five-day slew of Native American films (including “Older Than America”), a “Buddhist wisdom” program, new animated work by Bill Plympton, kids’ movies about a raven and a mantis, and an Austrian Oscar nominee — all of it kicked off Wednesday with the drum beats of Midnite Express and the blessing of activist Winona LaDuke.

Sprinkling a little “Sugar” on the pan-national feast, Brooklyn-based film directors Ryan Fleck and Anna Boden — whose “Half-Nelson” with Ryan Gosling remains among the best American indies of recent years — will wing in on closing night of the fest to present their latest.

“‘Sugar’ is the perfect Beyond Borders film,” says festival co-director Jim Brunzell III, who scouted this baseball movie at Sundance. “The lead character comes to the U.S. from the Dominican Republic, and although he can play minor-league ball, he has to live with his host family in Iowa and adapt to their culture. The film is really about growing pains.”

Speaking of which, Beyond Borders itself started small two years ago as the Twin Cities Tibetan Film Festival, and has just now sprouted into its ungainly new body.

In the absence of enough Tibetan films to sustain an annual festival, the nonprofit Rimé Foundation, which seeks to promote Tibetan wisdom for Westerners, called on Brunzell, formerly of Minnesota Film Arts, to internationalize the offerings while keeping the focus on uplifting cinema that can inspire cross-cultural exchange and understanding.

Naturally, the marketing of this border-crossing excursion — orchestrated by the festival’s Robb Quast and Jennifer Manion, who’ll donate profits to social service groups in the Twin Cities — has reached beyond the Buddhist crowd to target the sort of broad-minded cineastes who can’t wait four more weeks for the Minneapolis/St. Paul International Film Festival.

Of key interest to this constituency is “Revanche” (screening Saturday at 9 p.m.), the Oscar-contending bank heist thriller from Austria.

“It’s a great film and we were stoked to get it,” says Brunzell. “It starts one way and then goes off in a completely different direction.”

As does Beyond Borders.

All Beyond Borders screenings and events are held at the Parkway Theater, located at 4814 Chicago Ave. S., Minneapolis. Tickets can be purchased in advance here.

No passport needed for Beyond Borders film fest