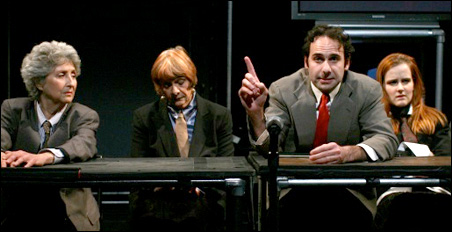 Photo by Paula Court
Members of the David Gordon Pick Up Performance Co(s) in “Uncivil Wars.”

David Gordon’s theater work, “Uncivil Wars: Moving with Brecht & Eisler,” which premieres this week at the Walker Art Center, has a long history. Make that an involved and prescient history, with unflinching contemporary relevance.

Let’s start at what might be the beginning: Shakespeare’s “Measure for Measure,” which Gordon claims was based on maybe 12 other prior literary works, and which in turn inspired Bertolt Brecht to write his 1931 play “The Roundheads and the Pointheads,” for which German composer Hanns Eisler composed the music.

Brecht’s play is set in the fictional country of Yahoo, which has a serious financial deficit and an abundance of corn. To solve the problem, the supposed natives (the roundheads) start a war and blame the supposed illegal immigrants (the pointheads) for their economic woes, inflaming class, race, religious and economic divisiveness in the process. Sound familiar?

It did to Gordon, who one day — during George W. Bush’s first term as president — found himself with Village Voice theater critic Michael Feingold’s translation of “The Roundheads and the Pointheads.” The script “seemed to convey exactly what was happening in America,” Gordon recalled last Saturday at a public conversation with Guthrie dramaturg Michael Lupu.

In 2003, Gordon did his own tinkering and staged an eight-week workshop for The Actors’ Studio in New York. He intended to shelve the work-in-progress, but “then Bush got re-elected and I pulled the script back out,” Gordon said. “It was the news. And I began to take more chances with the material as it continued to pose more questions.”

Additional workshop stagings followed, in 2005, 2007, and this February at Skidmore College. Even though Bush has left office, the work has continued relevance, Gordon insists, because we and our new president are navigating through the backwash of Bush’s policies.

Pioneering post-modernist
In each iteration of “Uncivil Wars”, Gordon has used members of his troupe, David Gordon Pick Up Performance Co(s)., as well as a chorus of students and performers from the community, in the production.

Leslie Van Duzer, an architecture professor at the University of Minnesota, is one of the Twin Cities community members making her performance debut in “Uncivil Wars.” “It was amazing how he took 20 people who didn’t know each other and helped us find a common pulse,” she said Saturday. “But there’s little dancing in the show, which is a relief.”

Gordon’s reputation, however, has long rested on his innovative approaches to movement and its use on stage. Some 40 years ago, Gordon (a native New Yorker) was one of the pioneering post-modernists who broke away from the drama and expressionism of classic modern dance, and stripped movement down to its everyday essence. 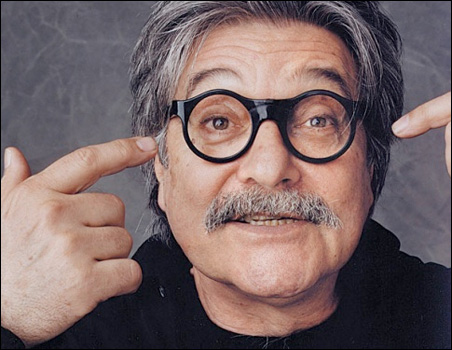 Photo by Paula Court
David Gordon: “I used to say I wasn’t a political artist. But I was a fool.”

A founding member of such experimental groups as Judson Dance Theater and Grand Union (supported almost from their inception by the Walker Art Center), Gordon added his own radical signature to his movement explorations: spoken text. Though almost a sacrilege then, text (whether spoken live or part of a sound score) is quite common today.

When asked why “Uncivil Wars” has so little movement in it, Gordon explained that, “Everything’s always moving in my work. I build objects that move, hire people to move those objects, people are moving all the time.” Ladders and chairs move through “Uncivil Wars,” as does text on a television screen, and as do performers who disperse and reassemble on stage.

But the work is more musical theater and stage play than movement performance. “I’m a very practical fellow,” Gordon said. “When the money comes from a dance department, then my work has more movement in it. When the money comes form a theater department, my works shifts to text. My mind simply functions for the stage, with movement, speaking, singing and humans all a part of it.”

Performers this weekend also include Gordon’s spouse and long-time collaborator Valda Setterfield as Brecht, pianist Gina Leishman as Eisler and acclaimed performance artist John Kelly. In 2007, Claudia La Rocco of the New York Times called one workshop iteration of “Uncivil Wars” a “deliciously heady … rumination on artistic ownership, part elaboration of [Gordon’s] continuing critique of current American politics, part something else entirely. … The delicate rhymes and cadences embedded in the songs and dialogue carry you along, as does the ceaseless but never busy movement of set and cast.”

The last performance by Gordon’s company in the Twin Cities, “Dancing Henry V” in 2005, drew easy parallels between Henry V’s invasion of France and Bush’s invasion of Iraq. Asked if his satirical, trenchant “Uncivil Wars” might be his most political work to date, Gordon replied, “I don’t know how anyone who makes work about what people do to people could be anything else.”

“I used to say I wasn’t a political artist. But I was a fool.”