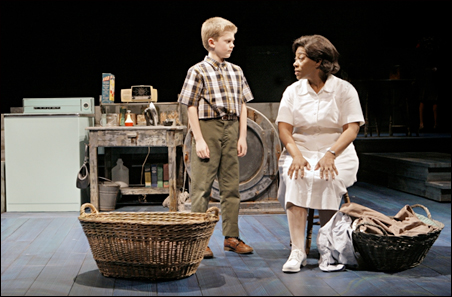 While attending a performance of “Caroline, or Change” at the Guthrie Theater on Tuesday, I was struck by how well opera fits the ruminative impulses in Tony Kushner’s writing. “Caroline” is called a musical, but it’s really opera.

For all its frequent flamboyance, opera is more about reflecting on events than showing them. That’s what arias are all about: expressing things that are going on in the head and the heart. To keep attention-deficit audiences in their seats, opera uses spectacle — and there’s a whole lot of it in “Caroline, or Change” — but the heart of opera is expressed in emotion, not action. And that’s the essence of the piece by Kushner and composer Jeanine Tesori.

So in “Caroline, or Change,” the misery — and, contradictorily, the comfortable security — of classism and racism in America is somehow conveyed in the basement laundry room of a Louisiana home in 1963, where a desperately poor black maid named Caroline grinds through her unrelenting days while wearing a crisp white uniform like armor against the unwanted attempts at familiarity from her employers.

The historic conventions of early opera — choruses, non-corporeal beings (think Gluck and Purcell) — are given full sway as mortals on earth go about their business while the gods look on. Simple-seeming events shake the universe — the equivalent, for example, of when Cordelia forgot to say “I love you, daddy” after King Lear announced her inheritance.

Pocket change
In Kushner’s tale, set in a small town, the lonely, absent-minded child of the homeowners leaves change in his pockets that Caroline dutifully collects in the laundry room and returns to him. The boy’s stepmother, desperate to connect to her new son, seizes on the issue as a first test of parental instruction — responsibility with money is important, after all — and tells Caroline to keep any money she finds.

Is this an earth-shattering thing? Yes it is.

The mother wants to enter her young stepson’s life, even if it’s through kindly discipline. She also thinks her new maid is underpaid and she thinks the added money, even if it adds up to only an extra buck or so a week, will warm their chilly, formal relationship and even demonstrate her social liberalism. The boy, aware that Caroline has three kids, makes his carelessness deliberate: Leaving change in his pocket gives him a thrilling power. And Caroline is torn between humiliation, anger at her new mistress for thoughtlessly upsetting the order of things, and a yearning to give her children a few coins to lessen the impact of their relentless privation.

And, incidentally, President Kennedy was assassinated, the civil-rights movement is boiling and somebody stole the statue of a Confederate hero in the courthouse square and sawed off its head. The world outside is swirling.

Worthy of received raves
I haven’t mentioned until now that the Guthrie’s production is one of those transcendent events that one experiences only rarely in a lifetime of going to the theater. If you’ve seen the show or have read this far into this piece, you’re already aware of the raves. I won’t expend space on naming all the excellent performers — but what a cast! — or the elements of design and direction that are eye-popping and magical.

One question in my mind is how “Caroline, or Change” would fare in more humble productions. Probably not as well, for it’s the kind of piece that could sink easily in a static staging. It has the ambitions of opera and it needs the ambitions of an opera production.

So I think its destiny is the opera repertoire. And if that happens, it will be billed as “Caroline, or Change,” by Jeanine Tesori and Tony Kushner. Sorry, Tony. In opera, composers get first billing.

“Caroline, or Change” continues through June 21 at the Guthrie. Tickets are $34 to $65. For information, go here.