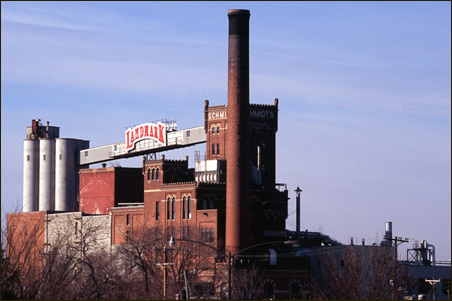 Courtesy of Preservation Alliance of Minnesota
The alliance believes rehabilitation of the brewery complex would have a “catalytic” impact on the West End neighborhood in St. Paul.

The Preservation Alliance of Minnesota released its annual list of the state’s “10 Most Endangered Historic Places” this morning — though two of the items on the list refer more to trends rather than to specific things. More about that later.

The alliance, a small nonprofit advocacy group founded in 1981, started releasing annual lists 15 years ago as a state counterpart to a nationwide list of endangered places that has been published every year by the Washington-based National Trust for Historic Preservation, which has been around since the 1940s.

Over the years, the state alliance has identified 132 historic places in Minnesota that faced “imminent danger through demolition, neglect, severe alteration or inappropriate public policy.” It says public awareness generated by the 132 listings have helped save two-thirds of them.

The Big Fish in Bena. The 65-foot-long replica of a muskie was built as a drive-in hamburger stand in 1958 and is now a storage shed next to the Big Fish Supper Club, a seasonal restaurant in the heart of the state’s fishing region about 35 miles east of Bemidji. Over the years, the big fish has been seen on television and, most notably, in the Chevy Chase movie, “National Lampoon’s Vacation.” The alliance says it has fallen into disrepair and is in danger of collapsing from rot.

Chaska Athletic Park. Built in 1950 as the home field of the Chaska Cubs baseball team, the park is a charming town-team ballpark, with a grandstand, wood bleachers, concession stand and dugouts. A proposal by the Minnesota Department of Transportation to realign Highway 41 would put a new road through the center of the park.

The Palace Hotel in Crookston. Built in the 1890s, the Palace Hotel was first put on the alliance’s endangered list in 2006 after it was acquired by Polk County through tax forfeiture. A plan to convert the hotel into rental housing has stalled in the current economic climate and the county board voted in January to demolish the old hotel if funding is not secured by October.

Dassel Co-op Dairy Association Creamery Building. The Dassel Creamery in Meeker County was one of the first dairy cooperatives in Minnesota (1894), and its distinctive brick building was built in 1914. The coop plans to demolish the building if a new use for it cannot be found and funding secured for restoration.

Saint Louis County Jail in Duluth. Built in 1923, the jail is part of Duluth’s Civic Center Historic District, but it has been empty since 1995 and has suffered major water damage. One proposal calls for the jail to be torn down to make way for a surface parking lot. The alliance acknowledges that “adaptive re-use of the structure would be challenging, but not impossible.”

Rock Island Swing Bridge in Inver Grove Heights. The double-decker vehicle and railroad bridge that spans the Mississippi River between Inver Grove Heights and St. Paul Park was built in 1894, but it has been closed for the last decade and became a public safety concern last year when 200 feet of steel and concrete collapsed. The National Park Service would like to link the bridge with a national river trail, but local county and city officials do not want to be responsible for the bridge or its upkeep, the alliance says.

Foley-Brower-Bohmer House in St. Cloud. The 1889 Richardson Romanesque mansion in St. Cloud was built for business magnate Thomas Foley. Notable for some 70 windows that incorporated stained or curved glass, the house was severely damaged in a 2002 fire, followed by questionable historic restoration, according to the alliance. The house stood derelict after a foreclosure in 2007, but a new owner hopes to restore it if financial incentives can be secured.

Jacob Schmidt Brewery in St. Paul. The most notable building in the 15-acre brewery site that anchors St. Paul’s West End is a main brew house that has crenellated towers, Gothic details and a basement rathskeller. Unused since an ethanol operation went under in 2004, the site was targeted for a multiuse development called Brewtown, which would have included artist lofts, apartments and condos, and retail/entertainment space. But the plan fell victim to funding constraints. The alliance believes rehabilitation of the Brewery complex would have a “catalytic” impact on the West End neighborhood.

If your favorite endangered place isn’t on this list, here’s why:

Alliance Executive Director Bonnie McDonald says the list is based on a number of considerations, including historic status, geographic diversity, the level of the threat, and the potential that some kind of positive reuse or rehabilitation can be achieved.

“There are multiple endangered properties all across the state,” she said, adding that the sites are selected for the list after a long process that involves public and professional nominations and final selections by a committee of representatives from a diverse number of groups.

“I don’t even get to vote,” said Erin Hanafin Berg, a field representative for the alliance who coordinates the program. But Berg said she plans to blog from the alliance’s website about some of the endangered places that didn’t make this year’s list.

Urban neighborhoods, wooden windows
This brings us to two so-called “statewide” endangerments that are on the list. One is identified as “Distressed Urban Neighborhoods,” which are endangered by a policy of razing foreclosed and empty homes. While most aren’t architectural gems, the homes are part of the fabric that gives neighborhoods a sense of place and history, the alliance says.

In particular, both Minneapolis and St. Paul plan to use federal funds to demolish hundreds of vacant homes. Berg says housing starts — the replacement of razed buildings with new ones — has less impact on jump-starting the economy than rehabilitation of existing structures.

“A sheet of drywall doesn’t go home or get a haircut, but a worker does,” Berg said. “You can create jobs through historic restoration. Beyond that, there’s the sustainability argument. We don’t have the resources to constantly tear things down and rebuild them.”

Perhaps even more unexpected is the alliance’s other “statewide” endangerment: A call to preserve historic wooden windows at a time when federal tax incentives are encouraging window replacement and other energy-saving improvements to homes. Right now, in fact, many home mailboxes are stuffed with advertisements from window-replacement companies, all touting a federal tax credit for energy improvements.

“We’re trying to get people to consider the environmental impact of wasting all these wooden windows,” McDonald said. “You can make historic wood windows more energy efficient instead of replacing them. The energy of making them has already been expended, and if you don’t try to salvage them, everything goes into a landfill and additional resources are expended to manufacture the new ones. So it’s a double whammy.”

Today’s announcement of the annual list will be repeated at news conferences next Tuesday in St. Cloud and on May 21 in Bemidji. The alliance also plans to exhibit a display of photographs of the endangered structures at museums, libraries and other public places throughout the coming year. For more information, go here.