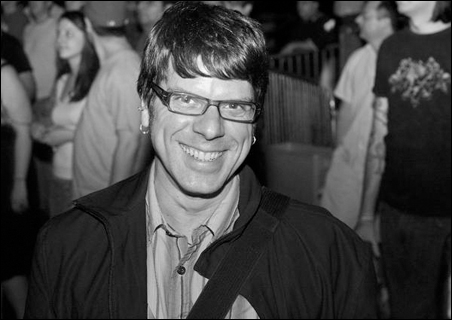 Rage Against the Machine’s Tom Morello may have dubbed himself a “one-man revolution,” but David de Young is so ahead of the curve he may be passing the revolution by.

Here in the Twin Cities, where the arts have long found a safe place for innovation and incubation, de Young has armed himself with every gizmo he can get his hands on, and is busy chronicling — and partaking in — the latest explosions of new theater and pop music in a city known for its DIY moments. Much of which would be a tale unto itself, but a better one is about what can happen when one man points the insta-technology of the day at his passions.

“I don’t like to talk on the phone. I prefer texts, emails, and Twitter,” said de Young, the 45-year-old founder and editor of the Minneapolis-based webzine, which celebrates its seventh anniversary June 12 at the Turf Club in St. Paul. “I’m a bit of a technical MacGyver, which is why I spent a lot of time at Radio Shack as a kid. You can connect just about any electronic device to any other one if you have the right connector.”

These days, the right connector is de Young himself. He carries with him an Acer Netbook and two old Hi-8 cameras, which he rigs to broadcast video podcasts of live shows. He’s got two phones — a T-Mobile Sidekick for his personal number and a Blackberry for his day job as an IT manager for a Minneapolis-based Fortune 500 company. To boot, he has a Sprint high-speed wireless card and lusts after an iPhone, though “I don’t have enough pockets.”

“I’ve always wanted to push stuff forward myself,” said de Young, who hails from “the farmer town” of Monmouth, Ill. “In high school I compiled a database of all the phone booth numbers in town so people could call me wherever I was. I was also always into micro-technology and owned an early precursor of a PDA all the way back in 1980.

“Almost 10 years ago now, I decided my computer, my TV and my stereo should be the same device so I wired them all together so I could listen to MP3s through my sound system. These devices are now continuing to fuse, but I’m worse than an ‘early adopter’ in some cases. I literally force things together that are not yet marketed as joined.”

A go-to information source on culture
With his arsenal of gadgets, de Young sets out on the town — clubs, theaters, anywhere there’s energy. In short order, the mild-mannered, bespectacled and impeccably groomed scenester has become a go-to hub of information, reviews and gossip about local and national culture, much of which goes unacknowledged by reporter-strapped newsrooms. And while his Tweets, emails and status updates are recognized by many as an unprecedented information source (he appears weekly on Esme Murphy’s show on WCCO-AM), there can also be a decided lack of wonder among both the general populace and tech-savvy snobs.

“I read an article recently that examined [science fiction author] Arthur C. Clarke‘s assertion that sufficiently advanced technology is often indistinguishable from magic,” said de Young. “And it lamented the fact that a lot of people have begun taking ‘magic’ for granted.”

Count De Young among the not jaded. Dude realizes that when the magic of music and technology are combined, it becomes another kind of magic altogether, something we’re only beginning to get our heads around. Indeed, de Young’s know-how and self-described “obsession” for sharing music makes James Bond look Amish and the fan-boys from “High Fidelity” look like hobbyists. The numbers (approximate):

Sum total of all gigs reviewed, podcasted, blogged about or photographed: 1,000.

A mission to document music events
“I think I have become almost addicted to seeing live music and documenting it,” he said. “I think I enjoy this all the more because I don’t get paid. I don’t answer to anyone. I don’t have to make money at it. Publications that need to make money can go out of business, but since [howwastheshow.com] doesn’t have to make money (as long as I have a day job) we’re recession-proof to a certain point.”

The son of an English teacher mother and a speech, mass communications, and theater arts father, De Young started a nightshift on an FM radio station when he was 16 and was named assistant news director before graduating high school. At the same time, he was discovering the punk-new wave sounds of the day.

“Before the Sony (cassette) Walkman was affordable to high school kids, I bought a similar stereo hi-fi cassette player from Sharper Image that transformed my walks home from high school into memories still vivid from this distance,” he said. “Blondie, Split Enz, The Stranglers, Scott Wilk & the Walls, Klark Kent, the Undertones. Before the Internet, kids like me listening to stuff other than AOR rock or Top 40 radio really felt like outcasts.”

De Young attended Grinnell College, where he ran the radio station KDIC and majored in political science and English with a focus on feminist literary criticism. After graduation, he lived in Milwaukee for a year, moved to Minneapolis in 1988, and has been a fixture on the scene ever since, though never more so than right now.

To be sure, all the right place-right time clichés apply. Because Minneapolis-St. Paul is a relatively small area, De Young’s small-fish-in-a-medium-size-pond missives have serious impact. At a recent music journalism panel, Chicago rock critics and National Public Radio’s “Sound Opinions” hosts Jim DeRogatis and Greg Kot opined that critics need to “brand” themselves now in order to sustain their careers. If that is true, then de Young is a quadruple threat who favors documentation over opinion, and speed over analysis. The times, they have been a-waiting for someone like de Young.

“I started keeping an audio diary of sorts in 1979 and stopped in on it to record a few minutes at least once a year all the way through the late 1990s,” he said. “When I was 19, I even recorded the telephone conversation that included the worst break-up of my entire life. It’s pretty bizarre in mid-life to have the ability to go back and hear exactly what went down during that call.

“My whole life I have been fascinated by recording things. I used a Radio Shack automatic telephone recording device at one point to clandestinely tap my own family’s phone to record my own and my sister’s phone calls. I used to pre-record my own radio shows so I could drive around with my friends while I was supposedly ‘at work’ and listen to my own show. When I was a kid, I used to have fantasies about being able to broadcast my life live to my friends. Now people can do this from their freakin’ cell phones.”

In April, de Young was at a show by Martin McHugh, a seventysomething button-box player from Ireland. McHugh is an icon of traditional music in St. Paul and Dublin, amazing and gracious and full of piss and vinegar — and nowhere to be found on YouTube. Moments after the performance, de Young sauntered up to McHugh, holding a high-def TV screen the size of his palm. Playing on it was what had just happened, instantly captured and rendered and managed, if not mythologized. The old man took one look at himself on the screen, stared for a moment, then fixed his eyes on de Young as if he was in the presence of a Klingon.

Such is the price one pays for being one of the planet’s most connected people. And how does the uberconnected disconnect?

“I have in the past done yoga and tai chi, but recently I mostly do sitting meditation (using Holosync audio that reportedly slows your brain waves to delta level), which I really, really try to do a minimum of 30 minutes every single day,” he said. “I’m a firm believer in Milarepa‘s quotation: ‘The affairs of the world will go on forever. Do not delay the practice of meditation.’

“Also, only recently, I have begun experimenting with banning myself from use of the Internet for certain periods in the evening. And I try not to take my cell phone with me when I go for walks, especially if I think someone might call.”

Jim Walsh is a writer and songwriter from Minneapolis. The paperback edition of his book, “The Replacements: All Over But The Shouting” (Voyageur) will be published in November.