I’ve heard it said that everyone is talking about movies lately. So here’s what I can tell you about the new batch.

Of the whopping eight films opening in area theaters today, I’ve seen five, two of which are highly recommended — and, at least on the surface, nothing alike. One of them is rated G for all audiences; the other is rated R for what the Motion Picture Association of America, in something of a rave review, calls “strong sexual content, nudity and language.” But both are about boys looking for love (and are described in greater detail below, starting with the raunchy one).

‘Spread’
Granted, Ashton Kutcher may not possess the acting prowess of Warren Beatty. But “Spread,” wherein Kutcher has the role of his young life as the pleasure-giving toy of well-off women in the Hollywood Hills, comes closer to the sudsy sexuality of Beatty’s “Shampoo” than any movie in, well, 34 years.

British director David Mackenzie (“Young Adam”) and his screenwriter Jason Dean Hall have obviously looked “Shampoo” up and down as well as sideways. Their appreciation — more than a wink and slightly less than a grab — extends to having its pretty-boy star play a narcissistic version of himself. With cocksure Kutcher fully enjoying his 90-minute strut across the screen (and us enjoying him), “Spread” mirrors the look-at-me vapidity of money-driven, meat-marketing L.A.

Promising the sort of one-night stand that stays upright till dawn, Kutcher’s Nikki makes a living of combing well-catered parties for older women who’ll offer their spread — house included — in trade for his particular gifts.

Hitting on super-rich Samantha (Anne Heche), a high-powered lawyer who seems to know his game but plays along anyway, Nikki secures the keys to a spectacularly swanky villa overlooking the class struggle. 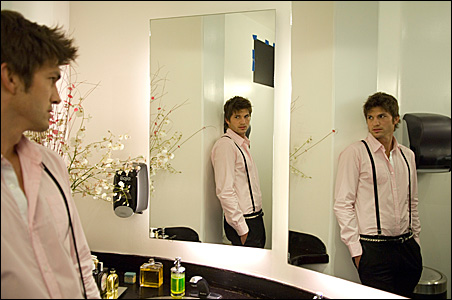 Anchor Bay Films
Ashton Kutcher has the role of his life in “Spread.”

Nikki, living above his station, appears to have one pair of jeans, but that pair looks good on him. Indeed, Samantha can’t take her eyes off the young man’s bod, and “Spread” — the rare movie to objectify the male physique more than the female — is happy to share the view.

It’s only when Samantha’s attention wanders to other business that the gigolo starts paving the road to his next lavish spread, and the film takes a somewhat darker look at its sun-splashed milieu.

Shooting in widescreen while conveying a sharp sense of verticality, Mackenzie gets us dizzy from the wealth of playthings on display, from swimming pool to private parts. When Nikki comes down from on high, being forced to scramble after fellow hustler Heather (Margarita Levieva) down in the valley, we feel the change in altitude — and wonder why we’re so hopelessly addicted to fantasies of life on top.

In 1975, “Shampoo” saw the Me Decade pushing the collective endeavors of the ’60s down the drain. “Spread” peers into the chasm between haves and have-nots and says that if a full-time sex machine like Nikki can’t live the good life, the most we can do — plenty, when it comes to “Spread” — is to grin and ogle it.

In fact, there’s a miraculous transformation in almost every moment of the film, which departs from the American studio ‘toon tradition (and stays true to Miyazaki) by being thoroughly, charmingly, outrageously unpredictable from one minute to the next.

Our hero is 5-year-old Sosuke (voiced by Frankie Jonas), who lives with his parents in a house on a cliff by the sea. Playing ocean-side with his bright green sand pail, Sosuke spies a goldfish desperately wriggling inside a glass bottle. (Miyazaki remains the most eco-conscious filmmaker on the planet.) 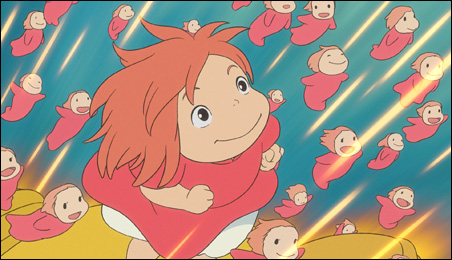 Turns out the precocious young fish, which Sosuke rescues and names Ponyo, has run away from her dad (Liam Neeson), an androgynous glamrocker of an evil wizard who despises humans and sets out to return his shape-shifting daughter to the life aquatic. As in so many Miyazaki movies, nature is thrown out of balance — in this case, by the human form that mermaid Ponyo assumes in order to be closer to her pal Sosuke.

Besides judiciously spitting water in the faces of crabby people, the talking Ponyo (Noah Cyrus) is a quick wit and all around miracle worker — as is Miyazaki, who continues to resist computer animation in favor of a living, breathing, hand-etched fantasia.

While “Ponyo” may not be top-drawer Miyazaki, the movie is fantastic nonetheless. Its many highlights include a scene of human Ponyo riding a fish-powered typhoon wave in pursuit of her friend Sosuke, stuck in the backseat of his mother’s speeding car. Wow!

As Mom (Tina Fey) says at one point, “Life is mysterious and amazing.” Add “ridiculous,” “enchanting,” and “hypnotic,” and you have a review of “Ponyo” that, like the film, is suitable for kids of all ages.

On DVD and recommended (in order of enthusiasm): “Two or Three Things I Know About Her,” “Gran Torino,” “Waltz With Bashir,” “The Class,” “Do the Right Thing” (special edition), “Bad Lieutenant” (SE), “Repulsion” (SE), “Woodstock” (SE) and “You Must Remember This: The Warner Bros. Story.”