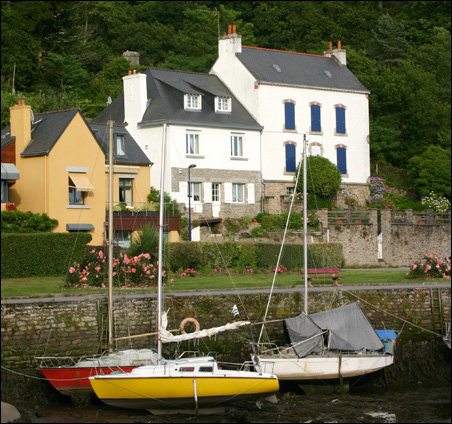 My last morning in Pont-Aven, France, I went out walking at dawn, to say goodbye to the pretty village before the shops and galleries opened and the streets came alive with tourists.

That early, the only people about were a cheerful pair of garbage collectors in clean white overalls and an innkeeper I’d met, who was coming out of the bakery with a sack of fresh croissants for her guests. The baker, of course, had been at work for hours.

“Pretty” isn’t really fair to Pont-Aven; ”picturesque” isn’t, either, and neither are the other adjectives I keep reaching for when I tell friends about it, though “exquisite” comes close.

The town is a flower-drenched jumble of blue-shuttered stone cottages and stuccoed storefronts clustered along the little River Aven — about the size of Minnehaha Creek — just where it flows into a tidal inlet on the coast of Brittany, about five hours by train west of Paris.

The hydrangeas were in full bloom when I was there this summer, and almost every house was pillowed in mounds of deep blue, periwinkle and pink. No wonder painters came here, I kept thinking. No wonder they still come.

Art is an industry in Pont-Aven: There are fewer than 3,000 residents but more than 60 galleries, as well as a school of contemporary art and a good small museum focused on the 19th-century painters who worked here.

The most famous of them was Paul Gauguin, who made several long visits in the late 1880s, before he headed to Tahiti and eventually the Marquesas. That connection is what sets Pont-Aven apart from other pretty, hydrangea-bedecked villages on the Breton coast.

Gauguin still touches everyone who comes here, even me: I was in Pont-Aven to teach a writing workshop that was housed in the Pension Gloannec, a former inn where Gauguin and other painters used to stay. Some of its interior walls are still smudged with color where artists wiped paint off their brushes, more than a century ago.

Lots of butter and cream
In Gauguin’s time, Pont-Aven was as paintable as it is now, but there were other attractions for impoverished artists from Paris, an American art historian told my class: For starters, she said, the residents here spoke French as well as Breton, the region’s Celtic tongue, which still shows up on street signs and place names.

Living here then was cheaper than in Paris, and that’s still true: Bed-and-breakfasts topped out at about $66 a night this summer, and a room in the best hotel in town cost about $76 — less than even a mediocre hotel in the City of Light.

The artists also found good eating in Pont-Aven, also still true, and for about the same reasons: Lots of butter and cream; farm-fresh eggs in myriad versions of omelettes and crepes; fresh seafood from the Atlantic, just seven miles downstream, and traditional Breton cider, so beloved that restaurant menus list it by variety, the way microbreweries list beers. 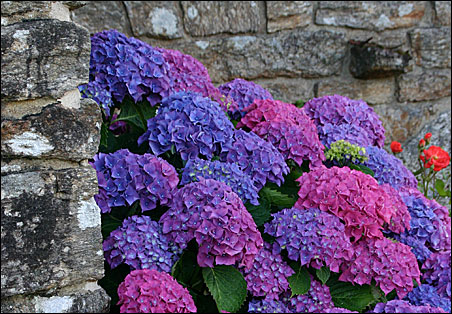 I had arrived just as schools all over France let out for summer vacation, and families with well-behaved youngsters were thronging the streets and restaurants, joining sojourners from other parts of Europe, mainly Germans, judging by the voices I overheard.

Even the river was busy, with a changing assortment of sailboats tying up at the village wharf each evening and sightseeing cruises running several times a day.

I took one down the Aven to the sea and back — an hour-and-a-half round trip — past more pretty villages, more sailboats, more handsome old houses buried in nasturtiums, geraniums and more of those powder-puff hydrangeas.

To say nothing of the occasional turreted mansion: “Chateau! Chateau!” a 3-year-old passenger crowed each time our boat passed one —  the way a child back home might yell “horsey!” or  “fire truck!”

Intense colors
The Aven used to power many small flour mills, and it still rushes and foams through old stone sluice gates and under the remains of wooden waterwheels in the heart of town. Gauguin painted some of them. Plaques along the river and in other key spots show copies of his work, so you can stand where he stood, see what he saw and compare it to what he put on canvas.

More than a few of the town’s current painters still use his style, his intense colors, even his human subjects, though they’re long gone: Gauguin liked to paint local peasant women in traditional starched white coifs and navy-blue dresses —  as if that was all they wore, when in reality it was their Sunday best.

“You couldn’t work in a field dressed like that,” said the art historian, Caroline Boyle-Turner, a Gauguin expert who is also an honorary citizen of Pont-Aven.  Nor was the town as primitive as Gauguin’s work suggests:  “There were educated people here then,” she said, as well as savvy businessfolk, among them the women who ran the small hotels where artists lodged.

Despite its heavy summer tourism, Pont-Aven felt friendly. People I’d seen only once or twice smiled when we met on the narrow sidewalks. Gallery owners — usually the artists themselves — chatted pleasantly about their work, even though I wasn’t buying.

And one afternoon, when I asked a shopkeeper for directions to the Tremalo Chapel —  a 16th century sanctuary above the town —  he closed early and walked me up a side street and over a bridge to make sure I found the grassy path that would take me there.

The Tremalo contains a rustic wooden crucifix that Gauguin memorialized in “The Yellow Christ,” but the day was fading when I got there, and the private chapel’s caretaker was closing up. My French isn’t good enough to let me beg, but I didn’t have to — she kindly invited me in and let me look around as long as I wished.

A week later, when I checked out of my hotel, I told the concierge that I would miss Pont-Aven. “You will come back,” she promised, smiling. “Everyone comes back to Pont-Aven.” By then I understood  why. 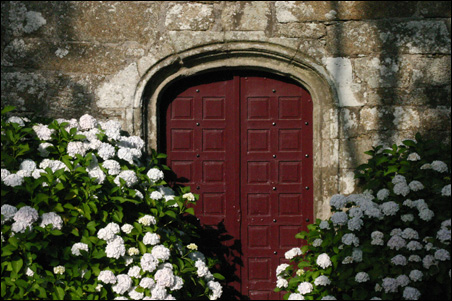 MinnPost photo by Catherine Watson
The doorway of the Tremalo Chapel, whose rustic cruifix inspired Gauguin.