The Chisago Lakes area, where Sue Leaf lives, is not exactly a hotbed of literary action, but that’s fine: She goes down to the cities to meet with her longtime St. Paul writing group. What’s more troubling to her is the relative scarcity of local environmentalists.

“There’s not a lot of us and we know each other well, on several different levels,” says Leaf, who has lived in Center City for more than a decade (and previously in nearby North Branch) and is president of the Wild River Audubon chapter. “But in an area of the state that is under constant assault from development, there is a continual stream of ‘brushfires’ that need to be stomped out. I just got home from a meeting of environmentalists, concerned about an — in our opinion — ill-conceived power plant that has been proposed for Chisago County. There’s groundwater issues and air quality and noise pollution at stake — it’s a big, big brushfire.”

In her new collection of essays, “The Bullhead Queen: A Year on Pioneer Lake,” Leaf touches on some of the smaller brushfires, and larger philosophical issues that come with living close to the land. She shares an intimate view of her neighborhood as she observes the changes, both natural (migrating birds) and man-made (a loud fixed water-ski slalom course on Pioneer Lake), that play out over a year’s time.

Leaf is highly involved in her community, church and school, and writes about her family’s place in the human world even as she wrestles with their impact on nature. But the two are often intertwined, as the family participates in the annual Christmas Bird Count, cross-country skis at nearby state parks or skates and fishes on the lake. 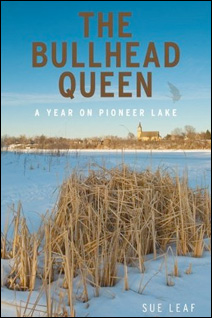 “One of my aims in my essays is to model the habit of seasonality, of tromps in the woods in autumn, cross-country skiing and skating in winter, tapping maple trees in earliest spring, and so on,” she says. “We consciously led our young children through these seasonal experiences, so that they learned to appreciate each season in turn, learned how to stay active, and learned how to pick up the clues to the turning of the great wheel of the year. Our family took Sunday afternoon and made it a time for hiking, skiing, canoeing — and hockey games!”

Inspired by Aldo Leopold
Leaf, author of “Potato City,” was inspired by Aldo Leopold’s “A Sand County Almanac” to write a book organized around the seasons. “I have read and reread his essay on the land ethic. It is one of the touchstones whenever I am trying to articulate exactly what our responsibility is to the earth and its other inhabitants,” she says.

In her own essays, questions are often left to the reader to answer: If natural resources are shared by all, who decides how they should be used — or used up? Does a seldom-seen otter belong to the town residents who delight in watching it play on the lake, or to the trapper who takes its skin to sell to China, and leaves its body by the side of the water?

Writers Rising Up, a non-profit devoted to cultivating the next wave of Minnesota nature writers, has twice honored Leaf’s work. Leaf, who is also a trained biologist and has taught at science at Cambridge Community College, seems poised to pick up where essayists like Paul Gruchow, Carol Bly, Bill Holm left off. Her work is probing, observant, and filled with appreciation. And yet, like all contemporary nature writing, it’s inevitably tinged with sadness.

“I think it is fitting to be sad. It means that something great and glorious is on the line, and one is not insensitive to the stakes involved,” she says. “When I feel awash in sadness, though, I think of these things: first, the earth is very good at renewal. I am astonished each summer at the vast amount of biomass that the earth has put forth. And I also think of how quickly the Berlin Wall came down. For years and years, that wall seemed so permanent. And then, one morning we woke up, and there had been a sea change and a new world was dawning.”