The daily news keeps us mindful of the U.S. military’s losses of life and limbs halfway across the globe. We tend to hear less about the stresses of war itself or of the toll war can take on military families.

The sacrifices of military life are a family affair, say those who live it and observe it. In the eight years since U.S. troops were first deployed to Afghanistan, then two years later to Iraq, new resources have emerged to support military families. Military-related organizations have created programs such as Living in the New Normal: Helping Children Thrive though Good and Challenging Times (LINN), [PDF] which educates school personnel in supporting youth and families. Operation Purple Camp reaches out to children and youth. Most high-profile perhaps is the Sesame Workshop’s Elmo-the-Muppet special, “Coming Home: Military Families Cope With Change,” which aired last spring on PBS.

“Positive things are happening,” said DeAnne Sherman, a Twin Cities educator and co-author with daughter Michelle of self-help books for young people. But Michelle Sherman, a psychologist who works with military families, noticed something missing in emerging resources. Nothing was being written for military teens. “It’s just not out there,” she told her mom. The mother-daughter duo went to work to fill the gap. 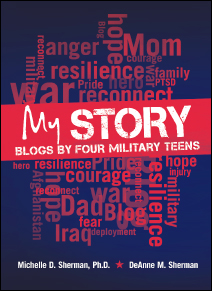 Their new book, “My Story: Blogs by Four Military Teens” (Beaver’s Pond Press) rolled off presses last week. The handy 64-page paperback zeroes in on four military teens as they record details in their personal blogs of their day-to-day joys, heartaches, challenges and family-related concerns. The teens are fictional to avoid breach of confidentiality, Michelle said, but they represent a composite of real military teens’ interests, emotions, questions, hopes and fears. Her mother explains: “They’re kids dealing with feelings and expectations before, during and after a parent’s deployment.” For example: the pain of family separation, the awkwardness of homecoming, depression (theirs or a parent’s) and life-altering effects of serious body or brain injuries that change the way things once were.

Kids making sacrifices
“Being a military kid is hard” — even for children of military personnel who don’t go to war, said  Michelle, director of the Family Mental Health Program at the Oklahoma City Veterans Affairs Medical Center and a clinical associate professor at the University of Oklahoma Health Science Center. The average military family moves nine times during a child’s growing-up years. Add deployment to a war zone, and challenges significantly mount. “You have a parent who tries to parent from the other side of the world,” DeAnne said. “And a parent at home who may be at wits’ end.” Deployment may be most difficult for children of parents in the National Guard or military reserves who become “suddenly military,” they said. Some children find themselves the lone military kid in their neighborhood or school classroom. And they lack the built-in support available to families living on a military base.

The book’s mission is “to give these teens a voice, and to provide models,” Michelle said. “Normalizing feelings, use of social support, who they can count on and how to reconnect with a parent.” Interspersed with the teens’ words are short sections explaining coping tools, signs and symptoms of teen depression and how to get help.

More than 1.8 million children have a parent serving in the U.S. military. One in four is a teen-ager. While most military youth do not develop long-term emotional problems, research over the last three years indicates many are experiencing difficulties. Children of U.S. military troops sought outpatient mental-health care 2 million times last year, twice the number at the start of the Iraq War. In-patient visits among military children have increased 50 percent since the 2003 invasion of Iraq. And children in military families are at increased risk of neglect and abuse, most often by the at-home parent. 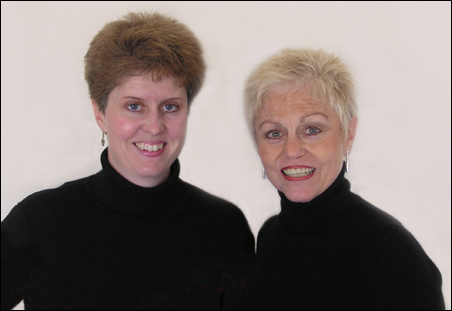 Teen supports new book for teens
California military teen Moranda Hern is excited to learn about the new book. She and friend Kaylei Deakin, both 17, last year created an organization called Sisterhood of the Traveling BDU’s (Army Battle Dress Uniforms) as a resource for girls and women who are or have grown up in military families. This summer the two teens launched a website, www.sisterhoodbdus.org, an online support group that attracts about 30 emails weekly and will soon go interactive, she said. The sisterhood’s first conference — open to California girls and servicewomen — is planned in March. “I think that teens really respond to things being written down,” she said. “They really respond to what comes from other teens. I think it’s good to have it coming from all different sides — mental-health professionals, peers and as many viewpoints as possible. I think the more resources, the better.”

The Shermans dedicated their book, available at Seeds of Hope Books or Book House Fulfillment (1-800-901-3480), to military children of all ages. The first page of “My Story” reads this way: “To our heroes: The children in military families. We recognize your sacrifices and honor your courage.”