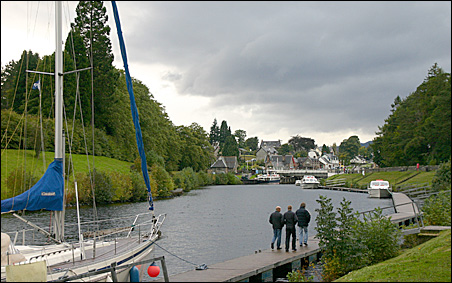 MinnPost photo by Catherine Watson
Fort Augustus and its Flight of locks on the River Oich, looking upstream from Loch Ness.

This time last year, like pretty much everyone, I was watching the economy crash, taking half my savings with it. If I’d been home, I’d have panicked.

But I was cushioned by distance, holed up with a couple of friends in an old stone cottage in Scotland, in a Highland hamlet called Fort Augustus on the banks of Loch Ness.  Yes, that Loch Ness.

I like small places better than big cities, and old better than new, and off-season better than busy summer, so I was comfortable the moment we drove in.

Like other picturesque villages in the Highlands, Fort Augustus —  population well under 1,000 —  lives by tourism now, and the season was almost over. The number of tourists was visibly dwindling; sales were underway at souvenir and handicraft shops, and shopkeepers were cutting their hours, if not getting ready to take the whole winter off.

That left them with time to chat when I asked the inevitable tourist question:  “Do you really think there’s a monster in there?”

Even at shops specializing in Loch Ness Monster t-shirts, monster refrigerator magnets and monster-shaped bath soap, people just shrugged and smiled. But a man who sold art materials —  always popular because the Highlands are so scenic —  said he hoped there was.

I loved his reason: “The world’s just a bit nicer with Nessie in it.”

Village life
It was the steadiness of village life that steadied me. Steadied us all, I think. There was nothing we could do about the financial crisis, so we just did the things we’d planned when we rented the cottage and booked the trip weeks earlier.

We shopped for groceries in the village stores, cooked our own versions of British fry-ups for breakfast —  fried eggs, fried bacon, fried tomatoes, oh, make that fried everything — and had fish-and-chips and roast-beef dinners in the local pubs, topped off with a game of cribbage and a dram or two of Scotch, back at the cottage in the evenings.

Sailboats and motor yachts were still locking through “the flight” —  five small locks like a chain of stairs linking the Caledonian Canal with Loch Ness. It was Fort Augustus’s claim to fame, and watching a boat or two “step down” became a slow, sweet, daily entertainment.

Sunlight on the Scottish hills kept alternating with rain, as it always does, as it always has. The little River Oich burbled quietly past our cottage, and Loch Ness glimmered just beyond, a long sliver of reliably blue-gray water that I could see every time I looked out our front door. 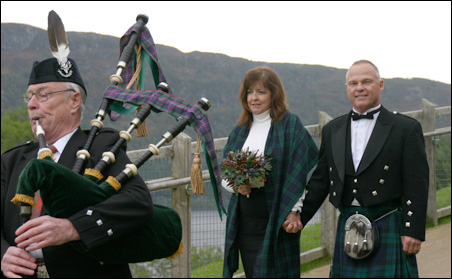 We saw no monster in it —  just a few kayakers and, once, a couple of guys in bathing trunks who waved bravely — and briefly —  from the frigid water.

Our regular visitors were bolder:  A pair of wild white swans and their five nearly grown cygnets, still wearing feathers of adolescent gray. They hung around our doorstep, agitating for food in the morning and dozing in the afternoons, with their heads tucked under their wings.

Bigger Scottish animals — mostly sheep and some shaggy Highland cattle — lived in a farm zoo beside the village. The cattle looked like Texas long-horns crossed with grizzly bears, but they were waterproof.

When the weather was clear, we went sight-seeing, driving narrow, twisting, loch-side roads through stands of tall firs, planted to reforest the now-bald Highlands; every view through the trees was a vista.

One day we drove south to Fort William, a larger, busier resort town near the foot of Ben Nevis,   already snowcapped by early October, and caught a little steam train for a trip through the scenic hills to the sea and back. (If you’ve seen any of the Harry Potter movies, you already know this train — in distance shots, it stands in for the Hogwarts Express.)

Whiskey Trail
Up north, near Inverness, we followed Scotland’s distillery-studded Whiskey Trail, stopping for samples and guided tours, walking among giant copper stills, peering into vats of foaming mash and learning about the complicated process of making the Highlands’ most famous product. (Best fact: A small amount evaporates when the whiskey is aging in oaken casks; distillers call it “the angel’s share.”)

One damp morning at Urquhart Castle, a grand, gray ruin on a commanding point above Loch Ness, a skirl of bagpipes broke the quiet, and a wedding party, led by a piper and a very proud groom in crisp kilt and velvet jacket, paraded past delighted tourists. 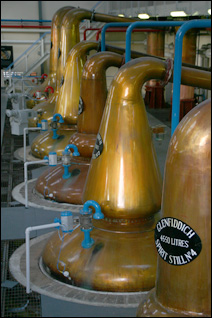 “Americans,” a clerk at the castle shop told me later. One of two American weddings that day, in fact. It happens a lot, she said — Americans with Scottish ancestors coming back to get married here, so strong is the pull of Scots heritage.

The bitter-sweetness of that heritage was underscored later at a wind-swept field called Culloden Moor. There, I tramped across rough ground behind a tall guide dressed head-to-toe in plaid, listening as he described the last battle ever fought on British soil.

Culloden was Scotland’s Gettysburg, a vicious clash in 1746 between British red-coats and badly outnumbered Highlanders over who would control Scotland. The Highlanders were decimated and the old clan system destroyed; even wearing tartan plaid was forbidden. The stigma didn’t fully lift until the young Queen Victoria fell in love with Scottish culture, nearly 90 years later.

I was in love with it too. I can’t claim enough Scottish blood to deserve plaid, but I’m addicted to bagpipe music.

If you want to hear the real thing, one shopkeeper advised, drop by the little pub next door on Friday night — “the boys’ll be there by 9.”  And they were — playing not for tourists, because I was the only one, but for themselves.

I spent that evening jammed among the locals, drinking a blend of beer and ginger ale called shandy, and being deafened by my favorite instrument at close range. It was great.

There was enough quiet time that I ran out of reading material, but in a tiny museum beside the flight of locks, I found a copy of Robert Louis Stevenson’s “Kidnapped,” which I’d never read. It was set in these Highlands, after Culloden.

Mid-book, I had lunch at another pub, where a man at the next table was holding a black-and-white puppy on his lap, slipping it tidbits from his plate.

Border collie? I asked. Yes, one of many he had at home. Smart? Och, yes, at six weeks, it already knew how to sit and stay. Name? “Breck.”

“Lass!” the man cried, delighted that an American would get the connection. None of his friends did, he said, and they’re Scots!

It always amazes me how quickly someplace you’ve barely heard of can start to feel like home, but moments like those did it for me in Fort Augustus.

Now, a year later, it’s that village I remember  —  and the people I talked with —  not the coincidental damage to my savings account. Distance, Fort Augustus proved, doesn’t make the heart grow fonder — it makes the heart calm down.