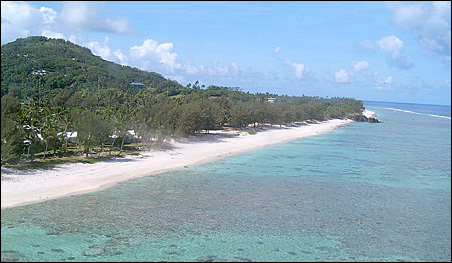 Creative Commons
The island Rarotonga of the Cook Islands.

I was in my normal pretrip panic when I picked up The New York Times last week — and my eyes fell on the only three words guaranteed to rivet my attention.

No, not “Disaster in Haiti.” That horror had been on my mind, as it had on everyone’s, for the past two weeks.

And no, not the trivial “Leno-O’Brien-Letterman” triad, either.

Instead, I’d spotted these: “The Cook Islands.”

It’s not often that the place you’re going makes the lede of a news story in the business section 48 hours before you take off.

That’s why I was standing stock-still in my kitchen, reading a story about securities fraud and Cook Islands trusts, ignoring my freshly walked dogs as they danced and fussed at my feet, hoping for breakfast.

All around the kitchen, on counters and cupboard doors, there was a litter of Post-It notes and scrawled to-do lists with commands like “set away message,” “water plants,” “decide suitcase,” “get new camera battery.”

I was ignoring those too, even weird ones like “find out what happened to elephantiasis.” The disease had been in the Pacific a century ago, but guidebooks don’t mention it now.

The Times report was about a more modern disease: “Under Cook Islands law,” the story said, “foreign court orders are generally disregarded, which is helpful for someone trying to keep assets away from creditors.” Quite a few Americans, apparently, have been successful at it.

Hmmm. And I’d just thought these islands would be a normal kind of paradise.

The Cooks are a tiny archipelago in the middle of the South Pacific, population less than 20,000, and I’ve been planning to go there for nearly a year.

“Planning,” my family forces me to admit, is really a euphemism for “talking about it.” Hence the need for all those notes and lists and frantic rushing around at the last minute.

I started pla….sorry. I started talking about this trip because of a broken foot that kept me housebound for the worst of last winter.

I spent much of that time whining and watching 83 one-hour episodes — all I could find on DVD — of “Adventures in Paradise,” the 1960s TV show that was my favorite as a kid. The series centered on a white schooner called the Tiki, whose crew sailed around the palm-fringed South Seas having adventures in … well, what else?

Far from being a comfort, though, the old black-and-white shows did what they’d done to me when I was a teenager. They made me desperate for distance — and for something to do.

By the time I got my cast off, I’d applied for a trip that friends had recommended — a volunteer project in the Cook Islands, run by St. Paul-based Global Volunteers.

Founded 25 years ago by Minnesotans Bud Philbrook and Michele Gran, Global Volunteers now has about 100 community development projects around the world, including some in the United States.

In what I regard as serendipity, GV calls its programs “Adventures in Service.”

“We are dedicated to helping build a foundation for world peace through mutual international understanding,” the volunteer handbook begins, “recognizing that the mere absence of war is not peace, and peace without justice is no peace at all.”

I’ve gone on volunteer vacations before — including a trip to Vietnam with Global Volunteers in the early 1990s — and I believe in the concept. The best such programs do projects that are created by local communities, with volunteers and local people working side-by-side.

Typically, the projects are on-going, while the volunteers rotate through, staying a few weeks at a time, as their regular lives permit — like a mini-Peace Corps for those of us who can’t make a two-year commitment.

My Cook Islands team starts work on Rarotonga next week. What will we be doing? I don’t know — though I’m pretty certain it won’t have anything to do with international banking.

We’ve been told to be flexible. To be willing to tackle whatever the local people ask us to do. To expect surprises and discomforts. To be able to roll with last-minute changes of plan. (Fairly easy for me: I mean, what plan?)

“Look on each happening as an opportunity for learning and growth,” the GV handbook stresses, because the main thing isn’t tangible results in the traditional American sense. It’s empowering people. Not what we do, in other words, but what we can be — together.