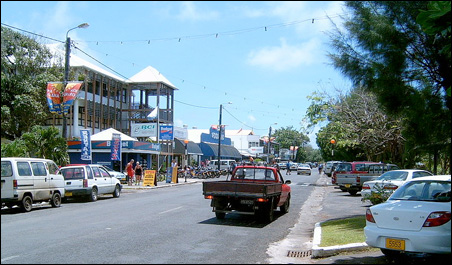 AVARUA, Rarotonga, Cook Islands — It was mid-morning on Feb. 10, and break time had just started at our grade school on the South Pacific island of Rarotonga. The kids were giggling over snacks, and another volunteer and I were drinking tea with the faculty on the veranda in front of our classrooms. The principal had just started peeling a mango.

“There’s a whole sackful in the staff lounge,” he said, smiling. “Help yourself.”

Mangos, I was thinking, must be the Polynesian version of zucchini back home: In mango season, everyone has so many that they can’t give them away.

Then the principal’s cell phone rang, and the sweet mood shattered.

“The schools have been closed,” he said, which meant that all across the island, school buses and parents were now rushing to get children home — a standard precaution when the weather forecast looked suspicious.

Within a minute, the principal’s phone rang again. This was no precaution: “The prime minister has just declared a state of emergency,” he said, and my heart gave a lurch.

That meant a cyclone — this hemisphere’s name for a hurricane — was definitely coming.

Everyone jumped up then. “Can’t we even finish our coffee?” one teacher yelped, adding “I mean — priorities!” so we’d know she was kidding. But it didn’t sound funny to me.

I’ve covered my share of natural disasters — hurricanes and earthquakes included — but only the way they’re always covered by the media: after the fact. 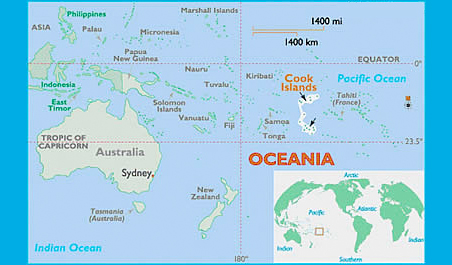 Now a Pacific hurricane called Cyclone Pat was bearing down on the Southern Group of the Cook Islands, and the one I was staying on lay right in its path.

Not that we volunteers hadn’t been warned. “Our” winter is “their” summer, and summer in the South Pacific is cyclone season. But the Pacific is a very big place, and the chance of a hurricane hadn’t sounded as bad as the certainty of a Minnesota winter. Now it was happening, and I didn’t know if I was scared or relieved.

Gray skies and thick air
The weather — always hot on this 26-square-mile speck halfway between Tahiti and Samoa — had been oppressively muggy for days. It felt exactly like tornado weather on the Great Plains, and it had gone on long enough to fray nerves.

The skies were solidly gray, the air was thick, and low-hanging clouds had blotted out the sharp  volcanic peaks that form the island’s heart.

White doves had begun appearing near the beaches, coming down from their normal roosts high on the steep green slopes. “They only do that if there’s no food for them up there,” a worried local woman told me, watching a pair of the pretty birds, “or if there’s bad weather coming.”

Two other volunteers in our group of nine, sent to Rarotonga by St. Paul-based Global Volunteers, pooh-poohed it all. It was their 10th time working on the island, they said, and they’d seen a lot of weather like this.

“Don’t worry until you see the frigate birds,” one man advised.

But as we left for work that morning, we had seen them — eight stark black shapes with forked tails, sharp as construction-paper cut-outs, cruising the air just overhead, all facing due east into the warm, damp wind.

Now, just hours into the school day, our team leader pulled up in the Global Volunteers van, collected the two of us, and drove on to the other schools where volunteers were assigned, to make sure they’d all gotten out safely. A spatter of rain began.

The road that circles the island was full of homeward-bound employees driving motor bikes, cars and pickups. I felt more nervous than they looked: Even in an emergency, “island time” still ruled, and drivers were only hurrying a little. But then, the speed limit all around the island is only 50 km — a touch over 30 miles per hour — so they couldn’t hurry much.

In Avarua, Rarotonga’s largest community, the only places still open were a big downtown grocery and a gas station, both busy with people stocking up. Other shops — they run heavily to tourist souvenirs, sarongs and Cook Islands’ black pearls — had boarded up their plate-glass windows with plywood. The place looked like a semi-ghost town.

Back at our beachfront motel — suddenly too close to the water for comfort — plywood was going up on our windows too. The incessant blue-and-white waves pounding on the island’s encircling reef were twice as high as normal — surfers staying at our motel estimated them at 12 feet, trough to crest — and about four times as loud.

I snapped on Cook Islands Radio — “the Sounds of Paradise” — and caught a weather update, given first in Maori, the island’s traditional language, then in English:

Cyclone Pat was now a Category 3, traveling southwestward at nine nautical miles per hour, heading straight for Aitutaki, the second-largest island in the group — and only about 140 miles north of Rarotonga. We would, the announcer said, start feeling the effects of the coming storm by mid-afternoon.

Hurricane advice
The announcer told listeners to turn to “your cyclone tracking map, located in the back of your phonebook,” and gave the coordinates that placed Cyclone Pat in square Q-16. On my copy, that put Rarotonga just a quarter-inch away from disaster. The proximity made my skin tingle.

The phone book also listed steps to take at each stage of an approaching hurricane. This was my favorite: “Tie your roof to the base of nearby trees.”

Everyone, with or without roofs to tie down, was supposed to pack two days’ worth of “essentials” — drinking water, medications, flashlight, clothing — and be ready to move to their neighborhood’s designated shelter.

What do you wear to a hurricane? I wondered, rounding up my own essentials. Answer: Whatever you can grab when your hands are shaking.

All hotels on the island — and there are many, because it’s a popular destination for honeymooners and vacationers from New Zealand — are required by law to have an evacuation plan for guests. Ours was already standing by, outside the motel office: two vans, keys inside, waiting to take us to a shelter in Avarua, when the evacuation order came.

By mid-afternoon, when gale-force winds should have been lashing Rarotonga, the fronds of the coconut palms were barely moving, and the waves on the reef were subsiding to normal again.

By 4 p.m., the motel’s workers were pulling the plywood off windows they’d boarded up only hours before. And on the phone book’s tracking map, Cyclone Pat was two full squares west of Q-16. It had changed course and missed us completely.

“All the fun of a hurricane,” I wrote in my journal that evening, “and none of the clean-up.”

But I was sadly wrong about that.

Rarotonga was spared, but the cyclone had hit little Aitutaki head-on, smashing houses, ripping ripping roofs off, ruining businesses. The New Zealand government, which once administered the Cook Islands and still helps support them, estimated a minimum of $7.5 million in damage. The good news was that no one had died.

By the time I left Rarotonga, a few days later, people were saying that the hurricane warning had been a governmental mistake — it was meant only for Aitutaki all along, and the fuss on Raro had been needless.

“That’s why we Cook Islanders smile all the time — because it’s so stupid,” one local man told me. “If I ever hear Q-16 again, I will scream.”