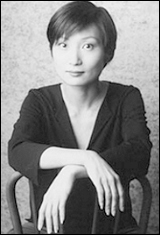 Kim Jackson was shocked to learn there were more than 10,000 Korean adoptees in Minnesota — or, as she puts it, “One for each lake.”

In fact, Minnesota has the highest number of Korean adoptees per capita in the entire world. But as a group, their histories are rarely told — or even mentioned.

So Jackson — herself a Minnesotan adoptee from Korea — set out to change that. Inspired by Wing Young Huie’s “Frogtown: Photographs and Conversations in an Urban Neighborhood,” Jackson worked with graphic designer Heewon Lee to document the Korean adoptee experience in Minnesota through photographs and oral histories.

The project took six years — much longer than either of them had anticipated — but on Saturday, Jackson and Lee held a book signing at Intermedia Arts, marking the official debut of “HERE: A Visual History of Adopted Koreans in Minnesota.”

“So many of us grow up without anyone around who looks like us, so having this whole book of people who look like us is really meaningful,” Jae Ran Kim, who wrote the book’s foreword, told a packed house at Saturday’s event. “As a community we’re really diverse. We grew up in the cities and we grew up in small towns. I hope this book really captures that there’s a big group of us.”

Korean adoptees typically grow up in white families, with few ties to Korean culture or the Korean American community. “We’re a somewhat segregated society, and our parents aren’t connected to that community,” says Kim Park Nelson, who put together the oral histories that accompany Jackson’s photos in “HERE.” 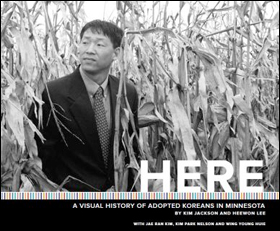 But at the same time, these adoptees are perceived as Asian by the world around them, and they struggle with prejudice and stereotypes that their own parents never had to face. “We understand white culture really, really well, but we also know what it’s like to be seen as racially different,” Nelson says.

In one of the oral histories, Pat Gingles talks about how there was one other family in town with two Korean adopted sons — but he avoided them. “I was embarrassed,” he says. “Because with my friends, if I hung out or started talking to Asians, they’d say, ‘Oh, Pat’s getting back to his roots,’ or something, and I don’t want that. So I went with the crowd, you know, like most high-schoolers.”

“Unlike second- or third-generation Korean Americans,” Jae Ran Kim writes in the book’s foreword, “we were isolated from familial or cultural role models who could help us navigate into adulthood as Korean Americans.”

But she hopes this book will help. When Korean adoptees inevitably face the question, ‘So, where are you from?’ Kim says, ” ‘HERE’ answers that question.”