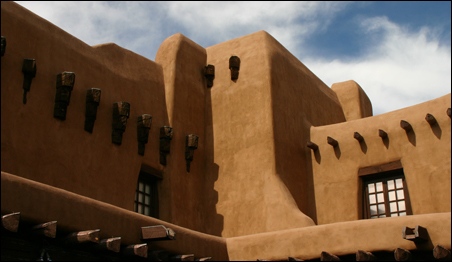 SANTA FE, N.M. — The arrows sticking out of the ceiling overhead were the first sign that I shouldn’t have left Santa Fe’s newest museum till last.

Sometimes, I realized, you can be so familiar with a favorite place that you make stupid choices, and that’s what I’d just done. I have loved Santa Fe for years, but I follow the same path every time I’m in that exotic little city.

That’s why I didn’t discover the city’s newest star until after I’d hit all my other faves on a visit last fall — after I’d worshipped paintings at the Georgia O’Keeffe Museum, after I’d filled up on enchiladas at a downtown restaurant, after I’d shopped for Native American jewelry on the Plaza, under the arcade of the Palace of the Governors.

Only then did I head around the corner and into the newly expanded New Mexico History Museum, a multimillion-dollar showcase attached to the Palace. Predictably, I ran out of time.

400th anniversary this year
Time is what the magnificent new museum complex is all about, and Santa Fe has more of it than the rest of the country. This year, it’s celebrating the 400th anniversary of its founding, making it the oldest state capital in America.

The expanded history museum opened a year ago this month, as part of the run-up to the anniversary.

I’d happened onto another pre-birthday event earlier in the afternoon — a commemorative religious procession to the Cathedral of St. Francis of Assisi in the heart of the old city. 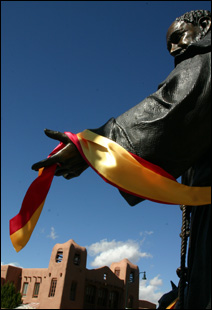 Banners waved in the strong New Mexican sunlight, ribbons flickered in the breeze, and tourists along the route paused to snap pictures as La Conquistadora, the oldest figure of the Madonna in America, was carried past.

“We are celebrating the arrival of the faith,” one of the smiling volunteers told me on the steps of the venerable stone church. She meant Catholicism, the Holy Faith that gave the city of Santa Fe its Spanish name. The faith arrived before the city did.

State’s centennial will be in 2012
New Mexico itself won’t celebrate its centennial as a U.S. state until 2012. But its human history started so long ago that the timeline in the new history museum runs about 4 linear feet before any of its dates begin to line up with such familiar East Coast pinpoints as 1620 and 1776.

The first Spanish settlers arrived in 1598, via the Camino Real from Mexico. But remains of ancient Native American pueblos go back at least 6,000 years, and the origins of many contemporary pueblos — there are 19 in the state — are lost in time. Acoma Pueblo, for example, an hour’s drive west of Albuquerque, may be the oldest continuously inhabited community in the country, going back a thousand years.

History like that makes Jamestown and Plymouth look like teenaged upstarts. But the new museum manages to cover it all — from pre-history to the present — telling the story of New Mexico in human terms, honoring ordinary people as well as heroes.

The arrows in the ceiling, for example, are replicas of ones that Native Americans used during the Pueblo Revolt of 1680 — a skillfully coordinated rebellion that drove the Spanish out of the region for a decade.

Museum highlights early leaders, settlers
The museum highlights many individuals, including Pop΄e, the Indian religious leader who inspired the Pueblo Revolt, and Don Juan de Onate, who had led the first 700 Spanish settlers into the territory.

Other names are more familiar — Kit Carson, Billy the Kid, tourism entrepreneur Fred Harvey and his coffee-pouring Harvey Girls, even J. Robert Oppenheimer, the scientist in charge of developing the atomic bomb, which got its first test in New Mexico, at a place called Trinity. 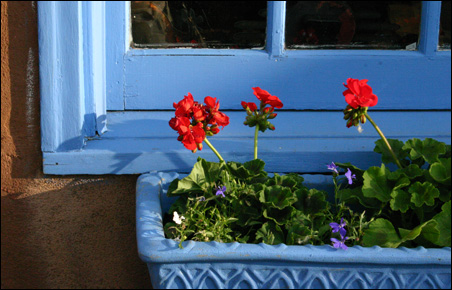 The museum’s newest exhibit — “Santa Fe Found: Fragments of Time” — focuses on the cultures that mingled here in the city’s early days. Objects on display come from four archeological sites, including a two-year dig in the area behind the Palace of the Governors, where the new museum now stands.

Like the whole state, the history museum offered more than I could absorb in a single visit. So the next time I’m Santa Fe, I’m resisting the temptation of habit, holding off on my other faves and starting where I left off — under those arrows, far back in the past.

Catherine Watson is travel editor for Minnpost.com and a former travel editor of the Minneapolis Star Tribune. An award-winning travel writer and photographer, she is the author of two books of travel essays, “Home on the Road” (Syren, 2007), and “Roads Less Traveled” (Syren, 2005). She teaches travel writing and memoir in university-level workshops in the U.S. and abroad.

Related: The New Mexico History Museum is at 113 Lincoln Ave., just off the Plaza in Santa Fe. For information, go here. Its special anniversary exhibit, “Santa Fe Found,” will continue until May 21, 2011. For events around the city, go to the Santa Fe Convention and Visitors Bureau website. For information on the statehood centennial in 2012, go to the New Mexico Tourism website.