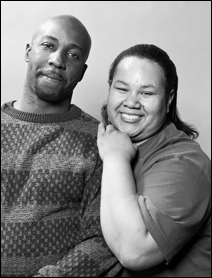 Jewell, 33, and Arnett, 46, stayed the night in a hotel available to Minnesotans among the state’s homeless. Rebecca, 53, slept in an alley with two pillows and a comforter. Chris, 49, stayed with his mom. They were among dozens of homeless people who showed up the following day to be photographed for a public exhibit that puts faces on the issue of homelessness.

Their images depict homeless people from babies in a mother’s arms to senior citizens and people of all ages in between. Some are alone, and some are coupled. In both situations, some have children. Many pictured in the exhibit also told their stories — of the slide into homelessness, of their hopes and regrets then and now and of the path they now see themselves on. In an innovative addition to the photos, those stories were recorded in the speakers’ voices and stored in voice mailboxes that event-goers can call from the exhibit — or from anywhere — on their own phones.

The exhibit, titled “Homeless is my address, not my name,” which opened Friday, is free and will continue daily from 11 a.m. to 9 p.m. through next Sunday in the Burnet Gallery at Le Meridien Chambers Hotel in downtown Minneapolis. A celebration of the project, also free and open to the public, is planned from 7 to 9 p.m. Wednesday in the gallery. (At other times call the hotel at 612-767-6900 to ensure that the gallery is not in use by a private party.) Project sponsors include Heading Home Hennepin, the Family Housing Fund and St. Stephen’s Human Services.

Homelessness mounting
Like the growing issue of homelessness itself, there is a starkness to the juxtaposition against white gallery walls of the more than 60 striking black-and-white portraits by photographers Kris Drake and Larry LaBonte. Add to that the juxtaposition of a focus on homelessness with the hotel’s elegantly appointed patio dining area that adjoins the gallery. And the gallery’s view across Hennepin Avenue of the stately Orpheum Theatre, where crowds come and go to take in the Broadway hit “Wicked,” with tickets priced at well more than $100 apiece.

In 2009, the most recent year numbers were compiled, there were an estimated 13,100 homeless Minnesotans, according to statistics collected by Wilder Research, www.wilder.org up from an estimated 3,500 in 1991. The largest group, 34 percent, is children who are with their parents. Forty percent of homeless adults attributed losing their housing to a job loss or reduced work hours. And long-term homelessness was noted as being on the rise.

In a time of recession, many people’s sensitivity for those in worse conditions than they are tends to heighten, said Margaret Miles, the exhibit’s project director. “People see others struggling with months of unemployment and worry about their own job,” said Miles, who is also director of development at St. Stephen’s Human Services. “Maybe when they see someone panhandling, they wonder, ‘What’s their story?'”

The power of story
Miles learned while leading the project that many homeless people were heartened to tell theirs. They’d say, “‘Social workers want facts and data, but nobody ever asked me for my story.’ ” Among those who complied, several themes surfaced often: leaving home as a teenager, addiction to drugs and/or alcohol, failed efforts to recover, loss of child custody and inability to get a job because of inadequate education, a criminal record or other past mistakes.

Arnett described his struggle this way: “A long time ago I made a mistake in life…and no matter how good I’ve been since that mistake it’s still held against me. I want some steady employment that looks at the individual, not the person I was but looks at the man I am today. Pity is not what a person needs. What they need is a little bit of light. Or they stay where they’re at.”

Jane recorded her story while finding her path out of homelessness. In her voice mailbox, she left this thought: “The truth is we are somebody deserving of love. We just got a little lost along the way.”