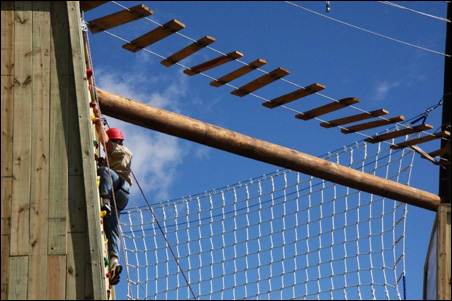 MinnPost photo by Catherine Watson
An adult climber on the Base Camp’s outdoor tower.

A century after its own founding, the Northern Star Council of the Boy Scouts of America on Saturday dedicated its new urban Base Camp at Fort Snelling and invited the public to celebrate.

Uniformed scouts and their families made up most of the crowd trying the outdoor climbing towers, indoor ropes course and the rock-climbing wall — a replica of cliffs at Taylors Falls — and taking turns launching the Space Shuttle in Base Camp’s NASA flight simulator.

The simulator is one of only nine in the country and is so accurate that its designer says a youngster trained on it could launch the real thing.

About every 10 minutes all afternoon, the cavernous Base Camp building reverberated to the roar of rocket engines, as crew after young crew successfully achieved blast-off.

The Northern Star Council spent nearly $10 million to acquire and renovate what had been a U.S. Cavalry Drill Hall — the giant red-brick landmark between Hwy. 55 and the Whipple Federal Building.

It’s easily accessible from both Minneapolis and St. Paul, Base Camp staff stressed, because it’s a five-minute walk from the Fort Snelling light-rail station and almost that close to Historic Fort Snelling and the trails and parklands of the Mississippi and Minnesota River valleys beyond. 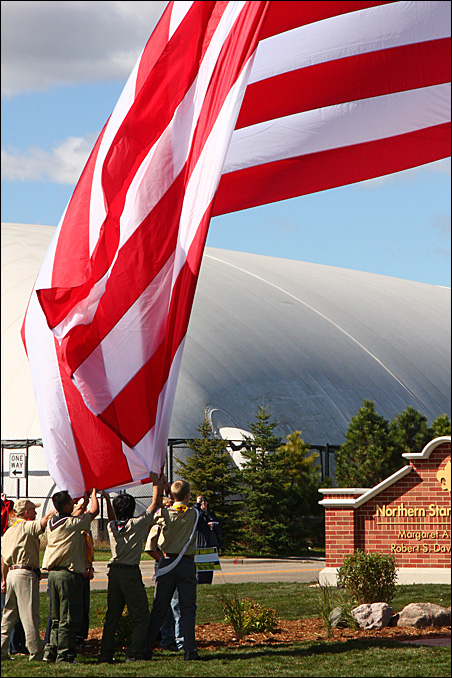 The 35,000-square-foot drill hall was built in 1907 — the same year that Lord Baden-Powell founded the scouting movement in England — and it served a variety of military purposes up through World War II. After the war, the army turned Fort Snelling over to the Veterans Administration. In the 1970s, the fort was transferred to state control.

By the time the Scouts bought the drill hall in 2007, it had stood derelict for about 35 years, like most of the rest of Fort Snelling’s historic Upper Post. The creation of Base Camp marks another step forward in the slow and complicated effort to preserve this part of the fort’s — and therefore Minnesota’s — history.

The future of other landmarks on the Upper Post — including a World War I hospital and the Victorian houses of Officer’s Row — remains uncertain. But Hennepin County has repaired and replaced roofs there over the last few years, and a consortium of government agencies and organizations is seeking new uses — and new funding — for the historic buildings.

Adaptive re-use is a cornerstone of the preservation movement nationwide, but few new uses anywhere are as adaptive — or as extraordinary — as Base Camp, the first new camp that the Northern Star Council has created in 20 years. (The Northern Star Council was formed about five years ago when St. Paul’s and Minneapolis’s Boy Scout councils merged.)

Rock wall and ropes course
While Cub Scouts in hard hats tried the rock wall and older boys and girls — and even a few adults — ventured out on the swinging bridges and ladders of the ropes course, Northern Star staff and volunteers talked about the Base Camp dream.

“Base Camp is here for the community,” said Jonathan Jones, a former special-education teacher who is now its program director.

“It’s for schools and youth groups, non-profits and corporations,” as well as Scouts, he said. All share the same goals: To develop leadership and team building skills in young people and “to foster and inspire independent exploration on their own.” 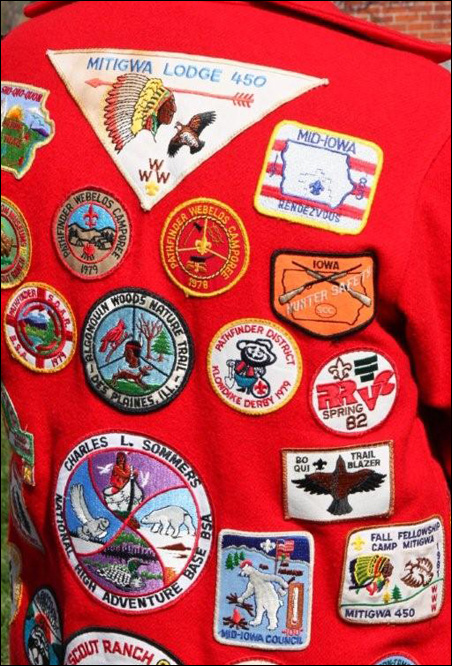 “It’s called Base Camp,” Jones said, “because that’s where you start your journey.”

The popular Space Flight Simulator is a good example: It doesn’t feel like a game — it feels real.

“It’s an incredibly accurate experience,” said its designer, Dr. Kerry Joels, director of the Total Learning Research Institute in Arlington, Va., who was in Minnesota for Base Camp’s dedication.

“All the switches work the same way as in the real Shuttle,” Joels said, so kids get hands-on experience in science, technology, math and team-building skills — plus a healthy boost to their self confidence. As he put it, “If you can fly the Shuttle, what CAN’T you do?”

For information on Base Camp facilities, programs, rental policy and such special events as open climbing days for the public, go to its website.