When the Swedish delegation saw how many women in Minneapolis’ Karmel Mall were selling East African clothing from their tiny stalls, many were skeptical.

“With so many selling similar things, how do they survive?” one of them asked.

Local businessman Osman Sahareed assured the visitors that the local Somali community was big enough to keep all of these women in business, especially when you consider how many African immigrants live in small towns or the suburbs but come to Minneapolis to do their shopping.

“And those women are very good at marketing their products,” Sahareed added with a smile. “I know; my wife tells me all about it every time there’s a new scarf coming in.”

The 23 Swedish visitors here last week were hosted by the African Development Center, a local organization that provides small-business loans and technical assistance to immigrant entrepreneurs.

Because Sweden has become home to a significant number of Somali refugees, the visitors were studying the Twin Cities’ thriving Somali community in search of successful models they could bring back and apply in their home country.

They saw sharp contrasts to the situation in Sweden.

Even with an influx of Somali refugees, for example, Somali-run businesses in Sweden are rare.

“Somalis in Sweden have had a very difficult time getting into the labor market and into the society,” said Benny Carlson, an economics professor in Sweden who has been writing about Minnesota’s Somali community since 2005. “They sometimes find their situation rather hopeless.”

Rahma Dirie, a Swedish politician who herself emigrated from Somalia, said she was struck by how organized the Twin Cities Somali community is. “People here help each other out,” Dirie said. In Sweden, the community is much more split along clan lines. 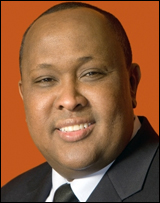 Hussein Samatar, founder and executive director of the African Development Center, said it would be disingenuous to say there are no issues of clan in the Twin Cities because problems do come up. “But it’s really self-interest for everyone to get along,” Samatar said. “The Somalis understand they have each other, and if they don’t help each other, they will be left behind.”

And the longer Somalis have been in Minnesota, he said, the less clan differences seem to matter.

Dirie also was impressed with how many Somalis in Minnesota were seeking higher education.

“Somali youth here are very committed to studies — which is different from over there, and they have good role models also,” she said. In Sweden, “people can survive whether they have education or not; they have a very, very generous welfare.”

But that’s part of the problem.

In Sweden’s Somali community, Dirie said, “everyone is on welfare and you don’t see anything else.” Finding a job or starting a business can be difficult, and while newcomers may arrive in Sweden expecting to work hard and make something of themselves, Dirie said, “when they see their relatives who are here 20 years and still don’t have jobs, they don’t feel motivated.”

Language is also a barrier. This is true everywhere, but Somalis may find learning English a better investment than learning a challenging Scandinavian tongue that’s only spoken in one country — especially since, according to Dirie, many Somalis in Sweden are hoping to eventually relocate to the United States or the United Kingdom.

Carlson said that one of the greatest lessons Sweden should take from Minnesota is to involve immigrants in the agencies that provide services to their communities, so they can help bridge cultural misunderstandings and allow newcomers to ask questions in their own language.

As it is now, Carlson said, “the Swedish organize things, and they know everything about Sweden, but they can’t possibly know about the 200 different minority communities.” There is little assistance to help outsiders navigate Swedish business rules and regulations.

Businessman Sahareed told the Swedish delegation that in his opinion, one of the reasons Somalis do well in Minneapolis is that the city “makes an effort — really, really makes an effort as a city — to understand the community.” There are also resources from the private sector; for example, there are multiple tax preparer businesses just within Karmel Mall, all of them staffed by Somalis.

Hussein said the most important thing for the community here is that Minnesota is welcoming. “There’s no way you can make a country or community better if you don’t believe you belong,” he said.