ELMIRA, N.Y. — “MARK TWAIN NEXT RIGHT” read the sign by the cemetery gates, as if a grave could be a street address. Obediently, I made the turn and drove along a narrow lane shaded by brilliant yellow maples and dark-green fir trees, wondering how I’d recognize the famous resting place.

A granite steamboat, perhaps, to recall the author’s early days on the Mississippi? A statue of Tom Sawyer and Huck Finn, his most famous characters? Or maybe a bust of himself, with his big mustache and thick curly hair frozen in bronze?

I found nothing like that — only dignity and calm.

America’s most American writer lies in a family plot on a gentle hillside, beside his beloved wife, Livy, surrounded by the graves of their children and her relatives — all under simple, matching headstones.

The name on his marker is the one he was born with, Samuel L. Clemens. The pen name we know him by — which he once claimed to detest — gets second-billing below.

For me, these quiet graves were the end of a quest I hadn’t planned on making. I’d always been a Hemingway fan, with runner-up passions for Robert Louis Stevenson and the Bronte sisters.

But this year — the 100th anniversary of his death — I’ve been immersed in Mark Twain. I’ve been reading almost nothing but his abundant travel writing, with side trips into biographies about him, when I needed a break.

It has felt like living with the man, and his writing is so prolific and varied — and his life so preposterously colorful — that I now wonder how I could have cared about anyone else.

I like literary pilgrimages in general, so I’d already visited his preserved homes:

The little frame house in the Mississippi River town of Hannibal, Missouri, where he spent his boyhood.

The fantastical mansion he built for his family in Hartford, Conn., when Mark Twain’s books had made Sam Clemens rich.

And, this October, Quarry Farm, his sister-in-law’s country home on a hill overlooking Elmira, south of the Finger Lakes in upstate New York’s softly rolling hills. 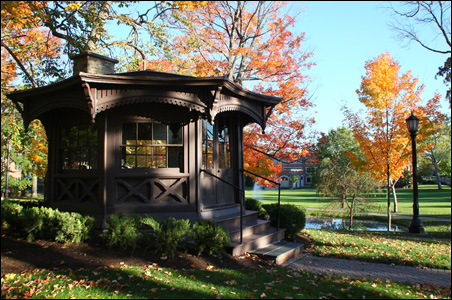 Twain and his family spent 20 summers at Quarry Farm, which now belongs to Elmira College, his wife’s alma mater. He wrote every day there, usually right through lunch, working in a tiny octagonal study that his in-laws built for him as a gift.

Back then, the study perched on a knoll overlooking Elmira’s river, the Chemung. It isn’t the Mississippi — nothing could be — but the Chemung still anchors a view that Twain loved, a panorama of blue hills drifting back for miles into the distance.

His study is preserved too, but not at Quarry Farm: It’s now the centerpiece of the college’s pretty, red-brick campus, where it was moved in 1952. I’d visited the study the evening before, at the end of a symposium on Twain’s travel writing, where I’d been one of the speakers.

(Disclosure: I will lecture on Mark Twain’s travel writing as part of the University of Minnesota’s daylong celebration of the author’s life, “Mark Twain in His Own Words,” on Nov. 13; details here.)

Elmira College calls the dark-brown gazebo the most famous literary building in America, and with good reason.

Much of Twain’s best work came out of this tiny eight-sided room, including “Roughing It,” “Tom Sawyer,” “The Adventures of Huckleberry Finn,” “Life on the Mississippi,” “A Connecticut Yankee in King Arthur’s Court,” “The Prince and the Pauper” and “A Tramp Abroad” — plus numerous short pieces and some of the blizzard of letters that he kept up all his life. (It’s estimated that he wrote at least 25,000, and if you count every short note he signed, the total might be 50,000 or more.)

By his early 40s, Mark Twain became a true modern celebrity, the 19th century’s equivalent of a rock star. He’d also changed American literature by writing directly to ordinary people, instead of just to the cultural elite. His work reflected ordinary speech, issues and lives. He was, after all, one of them. One of us.

His story is as classically American as Abe Lincoln’s — just wilder.

Sam Clemens’ family was poor and got poorer after his father died. The boy quit school early and by age 12 was setting type on his brother’s newspaper in Hannibal, smoking his trademark cigars and starting to stir up trouble with his writing.

When he was barely 17, he lit out to see the country, working as a printer in St. Louis and New York. Then came his years of piloting steamboats on the Mississippi. Then Nevada — by cross-country stagecoach — where he worked as a miner in the silver rush. Then California, where he was a popular columnist. Then Hawaii, as a foreign correspondent when the islands were still a monarchy.

And then the world at large.

His first big hit was “The Innocents Abroad,” a fat, lively travel book about the five months he spent on America’s first true pleasure cruise — from New York to the Holy Land, with stops at every major cultural shrine in between. His tone changes every few pages — funny, sarcastic, lyrical, indignant — but always readable. It still is.

Travel seems to have been Twain’s solution to everything. He crossed the Atlantic more than two dozen times, spent a year lecturing around the world when he was 60, and lived abroad for about a decade, because a good life with his family was cheaper there than it was back home. 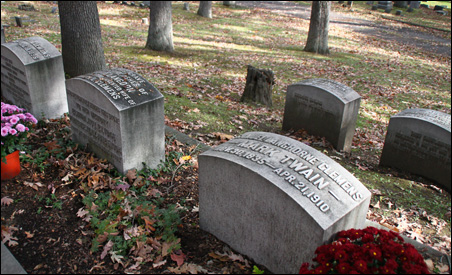 MinnPost photo by Catherine Watson
The Clemens family graves at Woodlawn Cemetery in Elmira, N.Y. Samuel Clemens’ is in the foreground.

He made a fortune, lost most of it, earned a good deal of it back. And while he loved hobnobbing with the cream of society wherever he went, he never stopped writing for the rest of us, always in that same, down-to-earth, authentic American voice.

The man had an opinion on everything — often delivered in what we’d now call sound-bites — and he gave us much more than humor. He particularly despised hypocrisy, cruelty and stupidity, in all their forms, and said so in print, vociferously.

“We don’t have anybody like that now,” someone said to me in Elmira, when talk turned, as it does these days, to American politics.

Lately, lots of people have been speculating on what it would be like if we did — if we had a nationally respected patriarch like Mark Twain, acerbic to all, allied with none.

If he came back from the dead, one online columnist wondered recently, who would Mark Twain be voting for this year?

Maybe nobody, I thought, as I gazed at the Clemens family graves that day in Elmira. He’d probably have thought all the extremist views were stupid. And he’d sure be having a high old time telling us why.