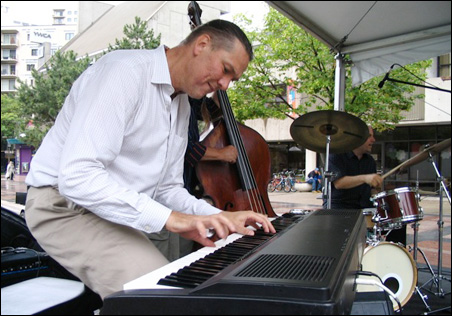 Photo by Pat Courtemanche
Jon Weber has 20,000-something tunes logged in his brain.

1. Saturday, Jan. 1: Bryan Nichols Quintet at the Artists’ Quarter. They were scheduled to play the weekend of Dec. 10-11, but then came Snowmageddon. I was there on the 10th and that show was as good as anything I had heard all year. With Nichols on piano (he’s also the composer), Michael Lewis and Brandon Wozniak on saxophones, Erik Fratzke on electric bass, JT Bates on drums.

2. Monday-Tuesday, Jan. 24-25: Dave Holland Quintet at the Dakota. Bass player, composer, and Grammy winner Holland started out working for Miles Davis and has led his own groups since 1972. He’s one of the most consistently interesting and satisfying musicians around. With Chris Potter on saxophones, Robin Eubanks on trombone, Steve Nelson on vibes, and Nate Smith on drums.

3. Friday, Jan. 28: Jon Weber Trio at the Artists’ Quarter. Playful, ponytailed polymath pianist Weber once claimed to know 20,168 songs. He’s a master stride and straight-ahead player who fills his performances with musical quotes and spoken asides about when particular pieces were written and when the composers were born.

4. Saturday-Sunday, Jan. 29-30: Hollywood Cabaret: The ’30s at the Black Box Theater, Bloomington Theatre and Art Center. Vocalists Arne Fogel, Maud Hixson, and Nichola Miller celebrate the era of the great Hollywood musicals with a program of songs from the 1930s. Expect to be educated as well as entertained; Fogel’s knowledge is encyclopedic. Pianist Tanner Taylor is musical director.

5. Thursday, Feb. 3: Meditations and Revelations: The Music of Charles Mingus at MacPhail. Funded by a grant from the NEA, MacPhail’s jazz coordinator Adam Linz has programmed a series of concerts by American jazz composer and bassist Charles Mingus. Concert III, “Something Like a Bird,” will feature Linz on bass, Bryan Nichols on piano, Michael Lewis and Chris Thomson on saxophones, Greg Lewis on trumpet, Scott Agster on trombone, Stefan Kac on tuba, and Dave Karr on baritone saxophone.

6. Saturday, Feb. 5: Dean Magraw and Marcus Wise CD Release at the Cedar. I’m sneaking this in because even though it’s not jazz, Magraw plays jazz (along with pretty much every other type of music) and I love the new CD, “How the Light Gets In” (Red House, 2010). The combination of Magraw’s acoustic guitar and Wise’s tablas is so beautiful you may forget to breathe.

7. Wednesday-Thursday, Feb. 9-10: Kurt Elling Quartet at the Dakota. Arguably the top male singer of our time (IMHO there’s nothing to argue about), Elling will release his latest CD, “The Gate,” the day before he comes to the Dakota. His previous CD, “Dedicated to You,” won a Grammy.

8. Sunday, Feb. 20: Laura Caviani and Friends: Songs of Alec Wilder at the Black Box Theater, Bloomington Theater and Art Center. Thoughtful and elegant pianist/composer Caviani honors the man who wrote more than 200 songs, including “Sing Our Song of Love” and “J.P. Dooley.” With Gordy Johnson on bass, Phil Hey on drums, and Gwen Anderson on French horn.

9. Tuesday, Feb. 22: Bill Frisell and Vinicius Cantuaria at the Cedar. This is bound to be tasty. American guitarist Frisell and Brazilian guitarist Cantuaria have worked and recorded together for years. Their new CD, “Lagrimas Mexicanas,” a blend of traditional Latin rhythms and improvisational jazz, will be released Jan. 25. Frisell plays electric and acoustic guitars; Cantuaria handles vocals, percussion, and acoustic guitar.

10. Sunday, Feb. 27: Jacqueline Ultan: 416 Club Commissions at the Cedar. In partnership with the Jerome Foundation, the Cedar has commissioned seven area artists to compose, practice, and perform new music. Cellist Ultan will perform with all four of the bands she works with: Jelloslave, Starfolk, Saltee and the improvising jazz group Antigravity. See the whole 416 Club lineup here.

11. Sunday, Feb. 27: An Evening with Branford Marsalis and Terence Blanchard at Orchestra Hall. One stage, two multiple Grammy winners playing with their own bands. This will be a good night. Saxophonist Marsalis’ quartet (with Joey Calderazzo, Eric Revis and Jeff “Tain” Watts) is now in its second decade. Trumpeter Blanchard has composed more than 50 film scores.

For a comprehensive listing of live jazz events in the Twin Cities, see the jazz calendar here or here.