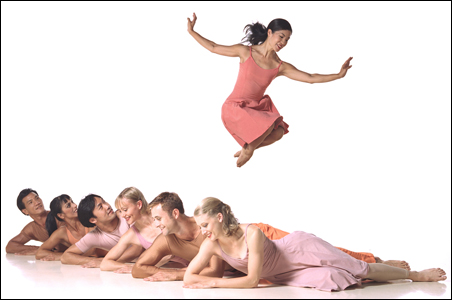 As a general rule, I’ve always found puppets a bit creepy, a little too anthropomorphic for their own (and our) good. But Canadian dancer/choreographer Crystal Pite and her company Kidd Pivot Frankfurt RM, pushed the idea of human and puppet to such transgressive and exhilarating extremes in “Dark Matters,” the performance left me breathless. Pite’s deployment of kuroko (the stage hands in traditional Japanese theater) as ninja-like characters in her exploration of human-puppet hybridity was by turns hilarious and threatening, but always brilliant. A former dancer with William Forsythe’s Ballet Frankfurt, Pite’s gorgeous and abstractly rigorous choreography illuminated with subtle gesture was definitely Forsythian; but her humor and intelligence in fusing contemporary ballet with a puppet allegory was singularly her own.

Many dancers and choreographers try, but only this Los Angeles duo has the wit, savvy and chops to deconstruct and elucidate that perennial question that vexes so many dance audiences: What is modern dance? With disarming ingenuity and whip-smart intelligence (as I wrote in my MinnPost review), Liz Casebolt and Joel Smith investigated and debunked the precious process of choreographing modern dance using a post-modern pastiche of explicative movement and expository storytelling, singing and costuming, delicious humor and direct observation. “Oh” was performed to sold-out audiences; Casebolt and Smith have become a Fringe Favorite. No wonder: A singular, thought-provoking and delightful performance, “Oh” both engaged and enchanted audiences by giving us permission to enter into the world of contemporary dance with two extremely open, talented, irreverent and amicable hosts.

In preparation for this electronic/ambient/experimental-music innovator’s concert, I went back to the genre’s origins: “Music for Airports” by Brian Eno (with whom Frost now works), and Jean-Michel Jarre’s “Oxygène” and “Équinoxe.” Frost is another animal altogether. Surrounded by speakers, laptops, guitars, a piano and all manner of electronic gadgetry, Frost performed barefoot and dressed in black. He played all of his instruments — producing waves of digitized wolf howls, static and sonic noise threaded with simple plaintive melodies — with a choreographic intensity and focused musicality. His performance was as riveting, revelatory and as visceral, as his music.

For the first time ever, the Paul Taylor Dance Company performed Taylor’s iconic “Esplanade” in the Twin Cities. The timeless work of classic modern dance, created in 1975, made dance aficionados deliriously happy with its simple yet signature choreography, unstoppable momentum, elegant athleticism and gracious spirit. While “Cloven Kingdom” (1976) held us in suspense with its prescient, almost sci-fi costumes and animalistic moves, Taylor’s most recent work, “Brief Encounters,” (2010) showed the master (now 80) still at the peak of his powers: The piece, set to music by Debussy, was imaginatively patterned, musicality imagistic, powerfully emotional, choreographically inventive and rigorously mysterious.

Laurie Van Wieren, “Who Made These Videotapes?”
December, Studio 206 Ivy Building for the Arts

My career as a dance critic almost parallels Laurie Van Wieren’s as a dance maker. A Chicago-born artist who studied film history and performance art, she moved to Minneapolis in 1975 and began creating singular work with signature characteristics: a quirky but extremely intentional choreographic style of brief, powerful, sometimes stuttering, often truncated movements with which she created indelible characters. Film and video, singing, spoken text and crazy costumes were integral components of her pieces. She was one of the first dance makers I wrote about, and her retrospective this month (which will continue in 2011) only confirmed what I knew back in the 1980s: Van Wieren was and continues to be a wholly original artist, whose work is as fresh and as relevant as it was 30 years ago. Today a kind of godmother to the next generation of experimental dance makers (some of whom perform in her work), Van Wieren continues to show them just how it’s done.