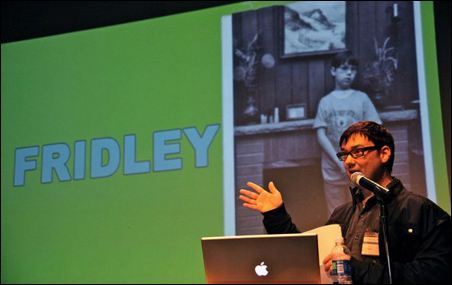 Photo by Lori Erickson
Videographer Chuck Olsen: “Nobody else in the room was from Fridley. I was there to represent this exotic suburban culture.”

Why does the Minneapolis/St. Paul arts scene remain such a fertile hotbed of creativity?

Over the years, artists have cited all sorts of contributing factors, from the weather to the confluence of colleges and universities to the abundance of free-thinkers butting up against the general persnickety nature of stoic Midwesterners. But at the public salon “Minnesota’s Identity and the Arts” Tuesday at Intermedia Arts, videographer Chuck Olsen might have nailed it when he suggested that the mad milieu revolves around something called “The Munson Constant,” in which we are all connected via bassist/singer John Munson’s myriad musical projects.

It was an as-good-as-anything, lighthearted, but not really, hypothesis: “Community” was the most oft-buzzed word of the evening’s discussion, though that concept may remain anathema to the artist whose core work comes not from collaboration but through a singular impulse, away from the numbers. But the main takeaway is that on a frigid November night, a couple hundred people from every walk of local art and music life gathered in a gallery to talk about how this all happened and what makes us tick.

Maybe there’s your answer: There are an awfully lot of curious people in these burgs who like talking about the curiosities of these burgs.

(Watch the salon in its entirety here.)

The salon was presented by the Minneapolis Arts Commission and Works Progress, whose spokesman Tim Gihring was on hand to say that the inspiration for the evening came directly from lame duck Gov. Tim Pawlenty’s slashing of the state arts budget, which led to Gihring’s spot-on and necessary rebuttal column.

“It is a peculiar blend of Scandinavian modesty, social conscience, and power of collective action.”

One by one, the panel (musician Adam Levy, photographer Wing Young Huie, dancer/choreographer Ananya Chatterjea, Olsen and Sturdevant) went on to shoot holes in the concepts of what, exactly, is “Minnesotan,” “Scandinavian” and “modesty” (“I disclaim the `modesty,’ ” said Chatterjea; “I have seen some of the most wacky, flamboyant performances in the Twin Cities”) while wholly embracing the “social conscience and power of collective action” bits.

This is how Huie, a Duluth native whose family emigrated from China and who has chronicled the growth of Lake Street and various other urban areas in all their decidedly non-Scandinavian roots, put it: “Lake Street is a microcosm of who we are, and where we’re going.”

Olsen, hailing from Fridley and representing her well, made a case for fans as the new artists and media makers, referring to the whole lot as a bunch of “smarty pants.” Olsen’s presentation was especially evocative, with slides of the Legendary Jim Ruiz, Atmosphere, and Radio K melding with Facebook fan pages and groups like “Keep Minneapolis Weird.” Olsen suggested that a local arts state be formed, with a flag flying the pink cheetah created by visual/musical artists Broken Crow.

Chatterjea began her presentation by recounting the night of one of her local dance premieres, which found competition from several other underground and overground stages across the metro area. “There were audiences for all of them — not all full houses — but I think we should celebrate that richness,” she said.

“I was in New York in the ‘80s and ‘multi-cultural’ was the buzz, but it was a rhetoric. I kept thinking, ‘How can all these artists of different colors and ethnicities meet and collaborate?,’ because it wasn’t happening. Fast-forward to now. I’ve been here for 10 years, and I have a company of women artists of color. I was allowed to do it in Minnesota, and I thank Minnesota, and part of it [the creativity] comes from thinking about it all as I walk the lakes and rivers of Minnesota.”

Levy gave a crash-course in the small but impactful ‘80s music scene that spawned Prince, the Time, Husker Du, the Replacements, Soul Asylum, Trip Shakespeare, the Honeydogs, Run Westy Run, and many more. “I mean, what’s the historical precedent for Prince?” said Levy. “It was away from the coasts, and there was a sense of newness in this little town on the prairie. At that time, the two camps (funk and garage rock) didn’t really cross paths, but now there are so many bands crossing genres, it’s such an exciting time to be in town.”

To wit: The other day The Current’s Mary Lucia back-announced a song by one of her favorite bands and went right into the weather, peppering both with real warmth. For the first time, it occurred to me how much around these parts, as Tom Waits put it, “everyone, everywhere they go, they talk about the weather.”

So much so that it’s not much of a leap to surmise that if “we” (include yourself if you’ve read this far) are conversant in the swings of the seasons and our moods, we’d be pretty good at articulating and expressing the mystical abstractions that weather, art, and music share.

The poet Robert Bly once told KFAI-FM’s Lynette Reini-Grandell that he attributes all this freak flag-flying to a “progressive collectivism” that was brought to Minnesota by the first Swedish immigrants, outcasts from the homeland who brought socialism and communism with them and created the template for the nonprofit community that now thrives under a very large umbrella by the Mississippi River.

Then again, maybe analysis is paralysis, and there’s something more primal at work. As Curtiss A said here: