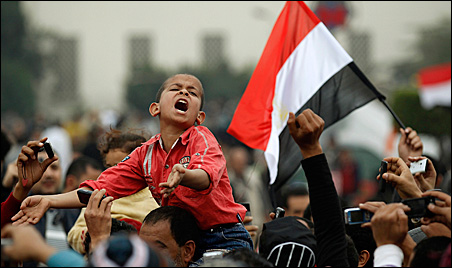 Zaar Taha hadn’t traveled to Egypt since 1995. So when he left Jan. 20 from Minneapolis-St. Paul International Airport, his vacation itinerary was simple — spend time with his parents, who live in Minnesota and escape the winters in their Cairo apartment; chill on the beaches of the Red Sea, and “catch up on kabob-eating.”

“My father asked me to come for a visit,” says the Burnsville father and advertising copywriter for BBDO Minneapolis, from Cairo via email Monday night. “The tone in his voice had some sorrow in it, like it might be the last time he’d be here. So, I came.”

On Jan. 24, the 39-year-old Taha was playing cards with a cousin and a friend when his friend’s cell phone beeped with a text message, alerting the trio about the first protest. The group discussed the growing unrest and continued playing cards. The next night, again playing cards, the friends received text messages about the next protest in Tahrir Square, which said: “Make sure you have enough cash in case the ATMs go down, make sure you have enough food, canned especially. And other such precautions.”

Then the chaos erupted. Like much of the world, Taha watched the events unfold on the BBC, Al Jazeera and CNN International. He went to the square and kept his camera hidden, fearing it would be confiscated and he would be arrested. While he says the photos he shot amount to “tanks, lots of tanks,” what he saw with his own eyes is something he’ll never forget.

“I loved seeing so many thousands of young, old, rich, poor people come together in Tahrir Square,” he says. “For the first time in three decades, the people stopped being afraid. Seriously, it was probably the most beautiful thing I’ve ever seen. Absolutely disgusting what [President Hosni] Mubarak ordered the police/secret police to do. So many people dead, so many hundreds, maybe thousands, injured. And for what? Because he’s too proud to step down.”

Many stories
As for the protests themselves, Taha says there are — and will continue to be — myriad stories to tell. 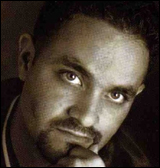 “I can’t prove it, but I heard this from a few good sources: those horsemen and men on camels that Mubarak ordered in from the pyramids to ride through the protests were paid 500 Egyptian pounds (less than $100), and were promised 5,000 (pounds) apiece if they managed to clear the square. From what I’ve heard, those riders who were captured got what was coming to them (I’d better not say what was done… it’s a bit graphic).

“Was also told of a story (and seen many such stories on TV interviews since) where a group of peaceful protesters (some women as well) were under assault by rock throwers (Mubarak’s secret police as they were found out later). They pleaded with an Army soldier who was sheltered by his tank to help them. He shook his head and looked away. They pleaded some more.

“He turned to them and said, ‘I’m sorry, I have my orders not to help.’ Then one of the protesters was struck by a rock in the head, knocking him to the ground. The soldier got down on his knees and begged them to forgive him, that he had his orders not to assist anyone in the Square, and that he would be killed if he disobeyed his orders. The blood continued to spill.”

Day by day
The chronology of Taha’s Facebook status updates from the last two weeks tell more of the tale:

Jan. 26: “Rioting in Cairo. I always take the bestest vacations.”

Jan. 27: “Would rather be in the center of the riots getting sprayed with tear gas than at the government building getting my new ID. Good grief, these people cannot be effing serious.”

Feb. 2: “Doucheass Mubarak has turned the Internet back on and set it to ‘spotty’ so taking this opportunity now to post to let everyone know I’m OK. Pray for the demonstrators’ safety, though, please. Doucheass has sent his people into Tahrir Square to wreak some havoc on the otherwise peaceful protest. Thanks!”

Feb. 2: “Lots of gunfire in Tahrir Square now, all spurred by Doucheass bringing his people in. Mubarak already has a lot of blood on his hands so what does he care if a few hundred more die?”

Feb. 3: “Omar Suleiman goes on Egyptian State TV and says ‘The Army is protecting the people.’ I still have the taste of barf in my mouth.”

Feb. 3: “Just witnessed the most troubling piece of video yet. Al-Jazzeerah TV captured a large state vehicle speeding through Tahrir Square, first clipping one protester knocking him down, then ACTUALLY RUNNING OVER 3-4 OTHER PEOPLE. There’s no way any of them could have survived that. PLEASE AMERICA—DO SOMETHING!!!!!!!”

Feb. 3: “2 AM Cairo: A perfect time for a street soccer game. I’m not complaining mind you, I just wish I could play too.”

Feb. 4: “So many people feel threatened by my camera. Police, soldiers, store owners, randoms. Woman at the bakery was distraught I was taking pictures. She said, ‘Everything here OK, everything good, no problem, no photos.’ I told her how she needed to open her eyes to something beyond what State TV is shelling out. So angry inside, my heart is breaking and yet, never felt more alive. Wondering if good will eventually win.”

Feb. 7: “Stood right in front of the tall fence in front of Mubarak’s palace today. Quite a scene with all the tanks and soldiers and police and barbed wire. I was told by a friend to keep my camera in my pocket so we wouldn’t be arrested. Love your freedom, people.”

‘It’s a police state’
As he wraps his head around his two weeks in Egypt, Taha summarizes a fight for freedom that’s long been in the making, and will stay with him even longer.

“Sure, my ‘vacation’ wasn’t much of a vacation, but I wouldn’t trade this trip for the world,” he says. “For years, we’ve known about Mubarak’s corrupt regime. It’s a police state, there’s secret police everywhere and if you’re here long enough, you can spot ’em pretty easily. It’s like they all shop at the Bill Cosby sweater shop. The police treat the people here like shit. No one has their dignity. Sure, if you have money you can live a really good life, but without your dignity, what do you really have?”

Taha’s parents live in Medinat Nasr, a 15-minute drive to Tahrir Square. His father is a retired architect who now establishes mosques around the Twin Cities, as well as operating a cemetery with partners that include Muslim burials alongside Christian, Jewish and other faiths.

“My parents are extremely happy with ‘the people of Facebook’ who managed to organize such a thing,” he says. “Dad says ‘This is the best experience in my life, watching the good people of Egypt revolting against Pharaoh for the first time in 7000 years.”

If all goes according to plan, Taha will be back home at the end of the week. Seeking, perhaps, a vacation from his history-witnessing vacation.

“The last couple days I’ve been out with family and friends, trying to avoid TV,” he says. “The tension in my shoulders from the past week was getting a bit much. And the guilt from not being able to join those people in the square, that was even harder to bear. Still is.”

A Minnesotan reports from Egypt: Please, America — do something!