As it did for much of its 30 years on the air, the last installment of “Sports Talk” with Joe Soucheray and Patrick Reusse went out with the hosts laughing.

After a couple hours of highlights and callers into KSTP Saturday morning, Reusse signed off by saying he’d be joined next week by the Strib’s Jud Zulgad, “who will try but be unable to replace Joe Soucheray.” Souch had the last words as ESPN barreled into a commercial:

“Thank you very much.”

You’re welcome, and Reusse got it right:  No one will be able to replace Soucheray, because the chemistry between the two old friends and ink-stained wretches was why people tuned in. They were an ongoing buddy movie of the airwaves, and to hear them banter, opine and make each other laugh is what every business — media and otherwise — aspires to these days (local, organic, green), not to mention a Saturday morning staple for a couple generations of Minnesotans who were hung-over or bright-eyed and bushy-tailed with Pat and Joe and coffee, the newspaper, errands and chores.

Dudes loved each other, in other words, and it was good for any soul to listen to that once a week, amidst the calm of a Saturday morning. I embarrassed them both in the late ‘80s when I said as much in a story I wrote about “Sports Talk” for the Minnesota Daily, but it was and remains true: The sound of two old friends and disparate personalities hashing over the week’s news was the kind of personal connection radio was made for. 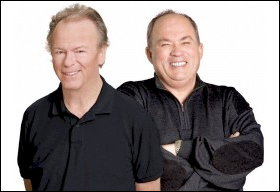 Of course, Reusse and Soucheray can still be heard together every weekday for an hour. But it’s worth pausing in the breakneck sports media rat-race to acknowledge how truly original Monday and Saturday “Sports Talk” has been. To that end, one of my favorite memories of the Saturday morning show was the one that aired after legendary Pioneer Press sportswriter Mike Augustine died.

Both writers were reverent, and the show unfurled for two hours as a tribute to “Augie.” In the end, Soucheray summed up what defined the old reporter’s greatness: “Augie loved finding a game to go to. Wherever he was, he’d find a game. High school, college, just to see what would happen.”

You could say the same thing about Soucheray and Reusse: They’ve loved finding games, and telling stories about games, and we’re all the richer for it. Nice run, guys.

No more Soucheray on Saturday