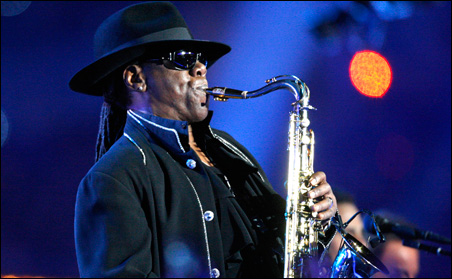 REUTERS/Scott Audette
The Big Man, from the Jersey Shore to the high seas of life.

The disco ball sprayed dizzy purple flakes on my lap, jeans and cowboy boots, which were kicked up on a chair of the Clown Lounge in the basement of the Turf Club, the oldest nightclub in St. Paul. It was Saturday night around 11. Gene Ween was on stage upstairs, preaching the gospel of freaky found family to a packed room of strange but true believers.

A few minutes earlier I had gone out for some fresh air. My friend John Swardson, the night’s opening act, was out front on University Avenue having a post-gig cigarette. We talked briefly about the latest tragic death in the local music family, Buck Hazlett and two of his kids, when our buddy and fellow musician/writer Danny Sigelman gave us the bad word that Clarence Clemons had died after having a stroke.

Of course. I bummed a cigarette from Swardson and walked down the street to light up in the foyer of Fantasy Gifts, amidst the neon lingerie, latex, and lotion in the window. The tattooed love girls were just closing up, and when I wearily asked, as they locked the heavily barred door, if they were off to party the night away, the seen-it-all sex-traders laughed and said, “I’m going to sleep” and “I’m going home to my kid.”

Back at the Turf, it was trumpet player and baseball pitcher Paul Odegaard who offered the wisest counsel of the night: “He’s gone, but think of how much he gave us.”

Leave it to a fellow horn player to put it into perspective – the idea, of course, that the volcanic sounds that erupted from the Big Man and his instrument are and always have been part of the eternal ether.

But at that moment, I needed to collect myself and get away from the heat and racket, so I descended the stairs into the basement and got a seat in the corner. I was the only one in that iconic man-woman cave, save for the bartender, and, later, a lone couple, so I suppose it was only natural that, as the dizzy purple flakes worked their nostalgic hypnosis that ultimately morphed into a very vivid present, I thought about, well, you.

It’s no exaggeration to say that the friendship Springsteen formed with Clemons via rock & roll is part of why I find myself writing these words — first for myself but also very much for any tramps like us who were born to live, in some way, as large as The Boss and The Big Man, whose friendship and bond through music led them from the Jersey Shore to the high seas of life lived at its fullest. They were cowboys, pirates, shamans  — and for any kid who ever wanted to experience life beyond the thrill of adventure books, they were a path.

“The night I met Clarence, he got up on stage and a sound came out of his horn that seemed to rattle the glasses behind the bar, and threatened to blow out the back wall,” Springsteen said when he was inducted into the Rock & Roll Hall of Fame. “But there was something else, something that happened when we stood side by side. Some energy, some unspoken story. He always lifted me up. Way, way up. Together we told a story of the possibilities of friendship, a story older than the ones I was writing, and a story I could never have told without him at my side. I want to thank you, Big Man, and I love you so much.”

Love. That’s why my brothers Jay and Terry and I found Springsteen together in the mid-’70s. That’s why people form bands. That’s why people play and immerse themselves in music. That’s why Curtiss A told WCCO-TV that he woke up shrieking when he got the news that his old running buddy-turned-super-dad Buck had been killed. That’s why it hurt so good the other night when I finally forced myself to snap out of it and join my friend and fellow musician Pete Christensen upstairs at the Church Of Ween.

We hadn’t planned on attending the show, but Gene Ween needed a keyboard and Pete hauled his down to the club and we ended up staying for the entire set. Geoff Matson, a kid from the audience, joined in on saxophone, and ripped it like a hurricane. When he got off stage, I asked him if he knew who Clarence Clemons was. He said no, but when I invited him to join my and Pete’s band on stage for our gig at The Stone Arch Festival the next afternoon, he said yes.

After a spirited farewell to Gene in the basement dressing room, Pete and I split for The Whiskey Junction to catch up with my brother Terry, who had just finished his set with The Belfast Cowboys. The three of us had been tooling around the lakes the night before when the iPod shuffle landed on “Spirits in the Night,” the song Clemons sat in on with Springsteen that fateful night they met in the early ’70s. When my brother saw me, his epic horn section still ringing in his ears, he buried his head in my shirt and sobbed.

The next day Pete and I played our gig, Matson the sax kid showed up and howled like the second coming and, as we sat on a sand bar on the river after the gig, I thought about the day Clemons called me.

It was a Saturday afternoon, a couple years ago. I was puttering around the house when the phone rang. On the other end was my friend Jackie Heintz, a St. Paul girl and super Springsteen fan who, along with her mother Jeannie, had formed a friendship with Clemons over the years that found them visiting him at his Florida home. My first CD had just come out, and I loaded up the Heintz gals with some swag to give to the E Street family.

“Hey, Jim,” said The Big Man. “I wanted to call and thank you for your music and the T-shirts. What a nice gift. Blessings to you, my friend.”

Back atcha, Big Man. See ya in the stars. 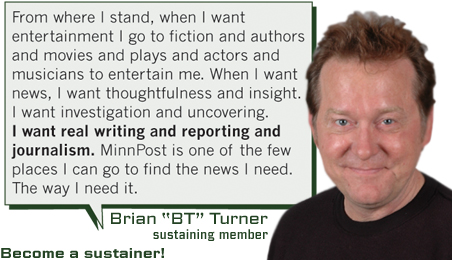