It started Friday evening with the sun going down, a blast of the horn from the Betsey Northrup, and DJ David Campbell playing the theme song to “Gilligan’s Island.” 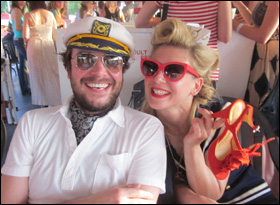 It ended with Minneapolis-based pop-punks Pink Mink covering the Buzzcocks’ “Ever Fallen in Love” as campfires on both shores of the Mississippi River cut the black water and sky. It was Pink Mink’s CD release party, like no other CD release party in recent memory. A four-hour tour:

7 p.m. About 400 passengers congregate on Harriet Island and get ready to load. One vehicle preps for the event with spirits and Ike Reilly’s “Boat Song.”

Many are dressed for the best-costume contest, including guitarist/bandleader Kent Militzer, Campbell, and many others in the guise of The Love Boat’s Captain Merrill Stubbing  and/or “Caddyshack”‘s Danny Noonan, while some of the Rude Girl crew and friends are decked out as the cast of “Gilligan’s Island” (sans the professor). Clearly, after the long winter and an endless spigot of bad news, summer is here and folks are ready to get their Yacht Rock on. 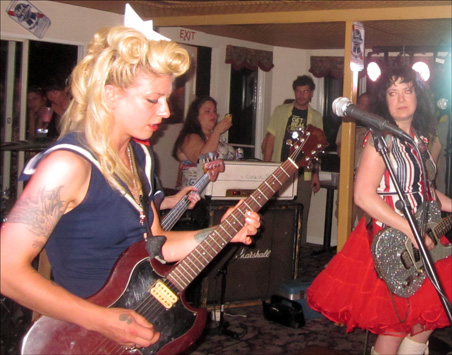 MinnPost photo by Jim Walsh
Pink Mink in all their River City glory.

7:30 Even with the let-your-freak-flag-fly vibe of the moment and government shutdown (see: limp Capitol dome on the riverbank horizon), passengers are frisked, some contraband is confiscated, and some of the buzz is taken off Campbell’s boarding tune choice of “Pass the Dutchie.”

8:10 The Betsey Northrup eases out onto the river amidst a few timid whoops from her passengers. Perhaps it’s the bad news spigot or the hangover from the 4th of July weekend “Twilight Zone” marathon on the SyFy Channel or Campbell’s choice of The Beach Boys’ “Sloop John B” (“this is the worst trip I’ve ever been on”), but the landlubbers’ joy is tempered by the very real fact that this ship could sink and we could all die.

8:20 No icebergs ahead, but the line for adult beverages is long and sweaty and grumpy. For the most part, the gathered group of thirsty club-goers, service industry workers, and musicians roll with it and accentuate the positive.

8:25 Word reaches the ship that Betty Ford is dead. A toast of Summits, PBRs, and Pink Minks – a one-night-only frothy fruity cocktail that tastes like a popsicle dipped in grenadine – is raised.

8:30 The sun blazes down on the Big Muddy and her playmates. A lone fisherman in a motorboat ignores the party tooling past him and casts into the weeds. “Summertime, and the livin’ is easy,” sings Sam Cooke to the kicked-back denizens of the upper deck.

8:35 The chill is on. People gaze out onto the river and sip beer as ’70s and ’80s soul tunes make love with the waves. Life slows down. Tiki bar on the river. Nirvana for any kid who grew up not on the West Coast or baptized in the waters of Lake Minnetonka, but wondering what it was like to go to all those cool parties with the Go-Go’s and Beach Boys.

8:35 A yacht by the name of “Wish Music” cruises by. The Betsey Northrup’s geeks and groovers in sundresses, cargo shorts, and tank tops wave to the seniors in sarongs, golf shirts, and khaki shorts, and vice versa.

8:45 Pink Mink co-leader Christy Hunt, the guiding force behind the cruise (which obviously spiritually borrows from the St. Paul Saints’ first commandment “Fun Is Good”) signs autographs of the band’s new vinyl and chats up partiers on everything from local music history to Bikram yoga. She’s clad in a seafaring blue skirt, frilly bloomers and red heels, looking for all the world like the heroine of a Gidget-gone-bad beach movie.

9:00 Birthday Suits, a feral guitar-drums noise duo, whip up a ferocious racket of perspiration and frenzied hair on the lower deck that brings to mind a hot yoga class as taught by Amphetamine Reptile Records.

9:15 Sign on dock: “WARNING DO NOT ANCHOR OR DREDGE GAS PIPELINE CROSSING.”

9:30 Thinking about other great floating rock moments, including The Stones on the flatbed truck taking Manhattan, the Sex Pistols doing “God Save the Queen” on the Thames, and the Clash playing “London Calling” in the rain and fog. We live by the river …

9:35 More whoops and waves from the shoreline bluffs, courtesy of the tipsy denizens of The Pool and Yacht Club. In the eye of the heat wave, Campbell and musicians/writers Joe Fahey and Pete Christensen talk with former Gopher great Rick Erdall about – what else? – ice hockey.

9:45 The sun is all the way down, and Pink Mink takes to the stage amidst stage light-loving moths and gnats and about 500 cameras. The band (Hunt, bassist/producer Jacques Wait, guitarist/singer Arzu Gokcen, and monster drummer Charles Gehr) rips through an hourlong set of classic prefab punk that celebrates their hometown with wry rockers “Seeking Scott Seekins,” “Hidden Beach” and a cover of the Replacements’ “Kids Don’t Follow,” which finds the frontline raising their axes to the low ceiling for Hunt/Gokcen/Bob Stinson’s still-crazy-after-all-these-years guitar solo.

10:00 The lower deck swelters and smells of vintage dead fish and wet sea dogs. Finally, Hideo Takahashi, yowler/guitarist for Birthday Suits, opens a door behind the stage. The sweet cool river air gushes in, and band and crowd elevate another few notches. Off mic and sucking in the fresh oxygen, Hunt sings a grateful verse of The Doobie Brothers’ “Black Water.”

10:45 No icebergs, but as the lights of downtown St. Paul and a few fireworks blaze in the distance, Campbell ominously uncorks Gordon Lightfoot’s “Wreck of the Edmund Fitzgerald.”

11:00 The Betsey Northrup docks and calls it quits for the night, but many of her hot and sweaty passengers hit the after-party at the Turf Club and make late-night promises to continue the cruise Tuesday night at Kings Wine Bar with DJ Jake Rudh’s Yacht Rock set.

But before all that, on behalf of summer-starved, bad-news-whipped, government-free Minnesotans and 24-hour party people everywhere, I want to thank Pink Mink and crew for their dedication to creativity, joy, and bad-assery. Bon voyage …