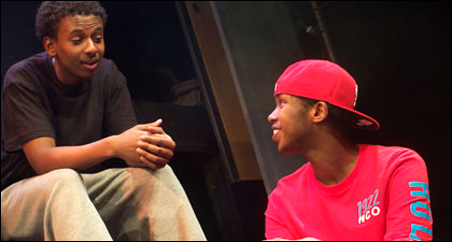 To be a Somali or East African youth in Minneapolis these days involves running a gauntlet of suspicion and strife. In their schools there are cultural frictions with white and African-American students and even among Somali, Ethiopian and Oromo themselves. In their homes there is the impossibly wide straddle between the controlling fears and expectations of their parents and other elders and the need to find and forge a sustainable identity in 21st-century society. In their need for employment they are facing one of the most inhospitable work environments in American history. And a small but significant number of their brethren have been mysteriously recruited to go fight and die in the civil war of their native country, intensifying their exposure to the already magnified socio-religious passions and bureaucratic apparatus that fuels America’s “war on terror.”

But the resilience of immigrant youth is an abiding “feel good” part of our collective American experience, and rich fuel for our artistic narratives. Which is why “Ku soo Dhawaada Xaafadeena,” or “Welcome to our Neighborhood,” a play by, for, with and about the East African youth in the Cedar-Riverside neighborhood, running the next two weekends at the Cedar Cultural Center, seems especially well-timed.

It has also been a long time coming.

“Jack Reuler and I began talking about doing a play involving East African immigrants 10 years ago,” says David Grant, the official playwright for the collaborative “Welcome to our Neighborhood” project. Reuler is the founder and creative force behind the Mixed Blood Theater, located in the heart of Cedar-Riverside. Another neighborhood troupe, Bedlam Theater, shares Mixed Blood’s longstanding goal of showcasing the diversity and local fabric of the community. Five years ago, Bedlam staged a play in the Mixed Blood space entitled “West Bank Story,” tracing the century-old history of Cedar-Riverside.

Around the same time, Bedlam, with support from Mixed Blood, began youth theater programs in the neighborhood that drew in East African immigrants.

Classes, plays with neighborhood youth since 2006
“Jack [Reuler] had the idea of advancing CRAZY, which is the Cedar Riverside Art Zone for Youth, as part of our outreach to the growing Somali population, and so we have been doing classes and making plays with youth in the neighborhood since 2006,” says Maren Ward, Bedlam’s artistic director. “Over time, there have been regulars in the program. So when we decided to do this play, we asked those people to join us.”

Those youth became the core group of the Voices of Cedar Riverside Ensemble, which makes up much of the cast and experiential material for “Welcome to the Neighborhood.” Add in crucial funding from the Legacy Amendment and the collaborative arc becomes wider and complete.

The project began in earnest last fall with a series of talking circles (a method frequently used in Bedlam Theater productions) that mined the experiences of people of all ages living in the community.

“The circle meetings served an important community function because everybody was invited and it let people know that, while I wasn’t going to directly use anybody’s stories so that they were recognizable, that this was going to reflect the experiences of everyday people and not simply be crafted out of thin air,” Grant says.

“After listening to all those stories, I started listening to the stories and concerns of those closest to home, meaning the young people in our cast. I have never worked in this particular way — with a play that had a cast before I had written a single word. I am African-American not an East African immigrant and bridging the cultural divide that existed between me and them wasn’t always easy. For me, the characters really sprang more than anything from the flesh and blood collaborators I had at the table for the central elements of the story.”

Intersecting plotlines
That story is a tapestry of intersecting plotlines, involving a disapproved romance between the two politically involved central characters, the expansion of a corner store in a coffee shop, the dreams of cab drivers to pool their earnings to buy a farm and raise Halal meat, ongoing political discussions at a community meeting place, and the threat of jail for one of the central character suspected of harboring a terrorist.

The target audience is equally wide-ranging. In the eyes of director John Bueche, one of the primary purposes of the play is “for the youth to share with the older members of the East African community what they are going through, which is why this is very much a community production.”

At the same time, issues are addressed that resonate far beyond the neighborhood.

“We could have easily avoided any mention of the terrorism issue, but the more I worked on the piece the more it seemed like it could be a healing thing to put on the table,” Grant says. “These kids know they are looked at with suspicion by law enforcement and a few of them have been questioned about the disappearance of the Somalis [who went to fight in Africa]. When they earnestly lay out that, ‘I know he was my cousin and we were tight growing up, but one day he was there and the next day suddenly he wasn’t,’ and have that met by skepticism and repeated questioning, it’s frustrating and frightening. And even those who haven’t faced that are well aware that there is this ongoing, thorough investigation —  it’s a part of their lives. So, although it is not a major part of the play, it does appear.”

“At one point the play was going to be called ‘The Kids Are Alright,’ and that came from addressing this overwhelming sense and concern — and it is not totally unwarranted concern — that there is a lot of trouble in Cedar-Riverside,” says Maren Ward, who, along with her role as artistic director at Bedlam, is an acting coach for the ensemble during the production.

‘A real part of the solution here’
“I often talk about how theater and the arts, as well as sports, are not just something on the side, but a real part of the solution here. If this play was never performed, I wouldn’t think it was time wasted. But I have also seen what happens at other performances by these youth, how excited people get seeing people from the neighborhood onstage. This is where a lot of people come when they come from Somalia — over there they call Cedar-Riverside ‘Little Mogadishu.’ But the idea that this is a crime-ridden neighborhood is still out there. That’s why the site of these young people addressing these issues so confidently onstage is so powerful. Besides, when you are in theater, you work so hard because performing in front of an audience is what you do.”

“The best part of this is the esprit de corps of the ensemble,” says Bueche, the director. “Where these young artists used to come to us with their ideas, now I see them beginning to take those ideas and work on their own. I see them thinking: ‘This is what a director, or a playwright, or a producer, does? I want to do that.’ “

A case in point is Hamdi Mohamed, who came to Minneapolis from Somali via Ethiopia when she was in the third grade, in 2001. Now, in addition to playing one of the lead female roles in “Welcome to the Neighborhood,” she has been organizing traditional Somali dancers at other events. A recent graduate of Washburn High who will attend Minneapolis Community and Technical College in the fall, she sees the play as “a way to let people in, to see what we’re like. A lot of times people see this as a closed community, just like a lot of times people see this neighborhood as being violent and where girls go bad. But once you are here and get to know us, you see it isn’t that way. I don’t live here — I live in the Whittier neighborhood — but I consider this home now.

“I don’t know if I’ll eventually be an actor, but I like how it gets us out of our comfort zones and opens up our emotions — it is very therapeutic that way,” she continues. “Somalis are very tribal people — I know what I am, my tribe and my clan, and I use the respect and pride from that. But the problems with that are why we are here [in another country]. So it is important for us to know, as to show, that we are a positive people, who are actors and singers and dancers, who have respect for others too.”

‘Welcome to our Neighborhood’ created ‘by, for, with and about the people of Cedar-Riverside’