For the last 30 years, percussionist and Zen priest Marc Anderson has been teaching mindfulness and presenting workshops on meditation to aid and improve communication, compassion, teamwork, and mindfulness among corporate executives, management teams, nonprofits, health professionals and others. Now the 55-year-old wise man is working on another dream: He wants to teach meditation in public schools across the Twin Cities. 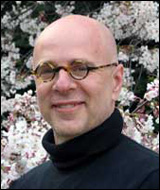 The time is nigh. At a moment when the human animal is being bombarded with technological stimuli at every turn, many people don’t know how to still their mind or even hear themselves think. Anderson can help. Says his friend and fellow artist Beth Barron, “I could go on and on about how Marc has impacted so many lives. He has traveled the world over and experienced the unconditional sorrow that so many of us constantly ignore but feel so deeply in our bones. I can think of no better role model (than Anderson) or label for the world communities to identify us as than The Twin Cities of Compassion or Mindfulness or Something.”

Clunky, perhaps, but not so far-fetched, given the fact that so many old ideas are being scuttled for new ones — or very old ones in this case, as the roots of formal mediation are as ancient as breathing itself. To be sure, the benefits of meditation are indisputable, and would be a welcome addition to any curriculum. Which is why Anderson will host a fundraiser for his mission Aug. 21 (3-5 p.m.) at 5030 Woodlawn Blvd. in Minneapolis, with music provided by Prudence Johnson and Laura Caviani. (For more information, contact Anderson at marcfathands[at]gmail.com or Kathy Lawrow at klawrow[at]gmail.com).

Anderson took time last week to answer questions about his work via email for MinnPost.

MinnPost: When did you start meditating, and why?

Marc Anderson: I started meditating 27 years ago. I was experiencing a lot of personal distress. I went to a therapist for help and I had a realization that there was a level of suffering, underneath the storyline of my life, that therapy could not address. I had been to some kind of seminar years before on Transcendental Meditation and I had read “Zen Mind, Beginners Mind” by then, so I thought maybe I should learn to meditate as a way of getting to the source of the problem. So, I found the TM people and my wife and I both learned to meditate. I took to it right away and began meditating regularly. I did TM for a year or more and then drifted over to the Minnesota Zen Center. When I walked into the building there I knew that something important for me was happening in that place and from then on I started a slow building relationship with Zen meditation.

MP: Why do you think it’s crucial for kids to be meditating and finding that quiet mind?

MA: I think it’s crucial for all of us to have a contemplative practice. It’s not just the quieting but with the quiet comes some deeper appreciation for the nature of mind, for a glimpse at the reality of our lives.

Calming is important because it heals us, makes us healthier and more capable to act with clarity and direction. Kids really need that. So few things in our culture support that, and unless a child is lucky enough to have parents that demonstrate it, it’s quite difficult for them to find it on their own. Calming creates some space for us to observe our thoughts and emotions and not be imprisoned or railroaded or in reaction to them all of the time. Just the calming awareness of a breath is a window onto a vast world, a world of ease and freedom that we are all operating in but rarely notice. No matter what our situation is, there is freedom in it if we know how to look for it, where to look for it. If kids grow up with this awareness, with the practice of looking inside, of calming the mind, then they have the possibility of more clarity, less emotional turmoil, more intentionality, more choice, less reactionary behavior.

MP: You’ve received enthusiastic support for your idea from The Trust for the Meditation Process and the Clouds in Water Zen Center, but the public school system is another beast altogether. What progress have you made in bringing meditation to the schools?

MA: In the past year I had a small program with EBD kids at an elementary school in St. Paul. It was very informal and I was only there a couple hours a week. This coming school year I will be at Boys Totem Town, which is a school/correctional facility for adolescent boys in Maplewood. We are designing a school-wide program that will include all students, teachers and staff. I will also have a similar program at the Open World Learning Community in St. Paul. In both places there will be regular meditation periods where I will have a chance to sit with them and answer questions, raise issues and ideas. There will also be meditation opportunities built into the classroom day and various mindfulness practices incorporated into school life, i.e. mindfulness of eating, mindfulness while walking, taking three breaths at the beginning and end of any activity, etc. I’m having discussions with some other schools as well so I expect there to be at least one more program or possibly several smaller ones coming on board during the year.

MP: I remember watching the Spelling Bee documentary “Spellbound,” and one of the champion spellers was from India. He meditated daily. I’ll never forget how present he was, especially compared to his more jittery competitors. It struck me that our kids would do well to learn mediation, and early on, but that such an endeavor is almost impossible in America. As you make your way with this important work, what signs have you seen that make you believe it could work, and that the system would embrace meditation?

MA: I think the signs are very promising now. Lots of people have stories like yours about seeing the evidence of meditation and its value. The research is strong and virtually every health care modality advocates it. It reminds me of when I was a vegetarian. When people knew, they would often apologize for their eating habits and say things like, `I should really eat less meat.’ These days it’s like that. When people know I’m a Zen priest or that I meditate they say things like, `I know that would be good for me, it’s just so hard for me to sit still, etc.’

It’s in our consciousness here. What we end up doing with it remains to be seen, but I don’t think it will be that difficult. There is bound to be some resistance in places but it’s kind of a no-brainer. It helps. It’s about the only thing I know about in life that is guaranteed to be a healthy, positive experience that can really change your life if you take it up seriously. I’m so encouraged by the receptiveness and support I have received so far. I thought the time was right and that it would be possible, but I’m surprised by the ease so far.

MP: How are the kids responding to it? Embracing it or bored or …?

MA: It’s a mixed response, of course, but really most are engaged. There are always a few in every group that are very drawn into the experience and moved by it. I had a little girl tell me once that she had never experienced quiet before. Some kids are a bit bored and they tend to just be sleepy. Others are resistant and get wiggly or giggly as a way of avoiding. Adults do the same thing but they don’t act out. They hide their resistance.

MP: It strikes me that it has never been a noisier time to be a kid, or adult. Constant stimuli, screens, over-communication, activities. Not a lot of contemplative time. Do you find that? Or have human beings always been wired to look to external sources for meaning, rather than inside?

MA: Well, I think there is more rapid-fire stimuli and that we all are struggling with the ability to concentrate on any one thing for very long. It’s not a contemplative time and we’re not a contemplative culture. I’m sure that early cultures had more time and things built into the way they lived that encouraged contemplation and awareness. People were more in their bodies because they had to be. Our constant noise and distraction is really often just that: A way for us to avoid the ordinary quality of life always in search for something exciting and “alive.”

The problem is we miss what is really alive, which is everything. We just paste our exaggerated needs over what is already alive and vibrant. It must be true that all people at all times have had trouble bringing their awareness to the present moment. The Buddha’s awakening was rare. Eckart Tolle is rare. People that carry that kind of deep energy are rare now and they have always been, I think.

… Can we have a pervasive culture of mindfulness? I think the answer is yes. In places where there has been a respect and a cultural place for meditation, it has had an effect.

MP: Would you consider a 16-year-old boy’s two-hour shower to be meditation?

MA: Probably not, but it probably relaxes him and that’s good. Tough on the water bill, though.

MP: Some schools currently teach yoga in Health class. In five years, where would you want this meditation program to be?

MA: I haven’t really thought about a five-year plan. I mean, I want to see meditation as part of all schools (and all work places, for that matter). I would hope that within five years there might be a dozen schools involved somehow. Maybe then the school district would be willing to take it on. Probably a little early for that, but you never know. Eventually that would be my hope: That school districts would see it as an essential part of their wellness program.