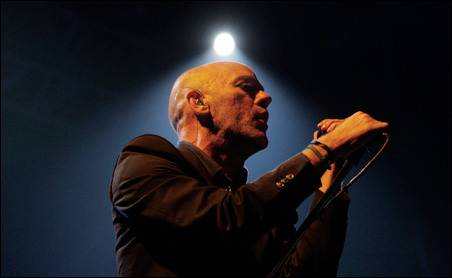 REUTERS/Pilar Olivares
R.E.M. was a beacon for independent music and art at a time when trailblazers were needed.

I love going to hear my brother sing and play music with his band, St. Dominic’s Trio, Tuesday nights at Nye’s Polonaise Room, which a few years back was named “BEST.BAR.EVER.” by Esquire Magazine.

Every week, those guys fill the room with love and entertain the troops with a sweet strain of soul music that makes a body never want to leave.

They’re so good at it. I often sit back in a booth or on a stool these nights, counting blessings, listening to the music, watching people, eavesdropping, and staring into the crystal balls of neon, mirrors and liquor bottles. The truth of the matter is that live music and a couple beers calm my scattered nerves as nothing else does, much in the same way that R.E.M.’s “Everybody Hurts” never has failed to.

Last night at Nye’s, I watched a middle-aged couple from Houston make out like teenage banshees in the front booth as St. Dom’s made Siamese twins out of The Who’s “Substitute” and The Flaming Lips’ “Do You Realize?” After I expressed my great admiration for their public display of affection, the kind that Minnesotans too rarely engage in, my friend Debbie and I ended up dancing to the double-dip depression blues with the Texans, who presented us with their cowboy/girl hats at the end of the night.

It was a night like that a couple of months ago when I found myself sitting alone at the Nye’s piano bar with Mike Mills, bassist for R.E.M., who was in town for a show at the Varsity Theater with The Baseball Project the next night. Hovering around the piano were Mills’ bandmates Scott McCaughy, Linda Pitmon, and Steve Wynn. They were the only people in the bar, save for Corky tending the front bar and Mike, Nye’s omnipresent and ornery piano player and singalong host.

I said hello to the group and sat down next to Mills. He and McCaughy sang a spirited “Mac the Knife.” After which I suggested to Mills, who was nursing a gin and tonic and looking as forlorn and far away from home as any traveling salesman ever has, that he sing “Georgia On My Mind.”

“That’s a good idea,” he drawled. We thumbed through the laminated pages of the songbook together and found it right there on page 71, the Hoagy Carmichael-penned heartbreaker that was written in 1930 and has been the official state song of Georgia since 1979. Mills’ friends were meandering around the otherwise empty room, so it was left to the two of us to carry the tune out wistfully into the muggy Midwestern night.

When it was done, Mills turned to me and, feeling an uncommon connection, said, “Do I know you?”

Not really, I said, even though I did — through his music, etc. What I know for certain, however, is that, as I write this, the late, great Vic Chesnutt is singing in my headphones his balls-tripping version of “It’s the End of the World As We Know It (And I Feel Fine)” from “Surprise Your Pig: A Tribute to R.E.M.,” and I’m remembering how R.E.M. was a beacon for independent music and art at a time when trailblazers were needed, and how they helped introduce me to so much good music, including Chesnutt, Hetch-Hetchy, Jack Logan, the Chickasaw Mudd Puppies, the Dashboard Saviors, Beggar Weeds, and more.

It crawled from the south, go be sure; Flannery O’Connor’s South, perhaps, under the direction of the college rock town of Athens, Ga., and bellied all the way up to the Twin Cities, where R.E.M. became adopted sons, touring nonstop and playing at Sam’s, First Avenue, Harriet Island, the State Theater, Met Center, the Xcel Center, and one memorable night at Midway Stadium.

Wednesday, R.E.M. announced they’re calling it quits. But on a week when “All My Children” is bringing old characters back from the dead every 10 minutes to wrap up the soap’s 41–year run, I believe in miracles. For example, here’s a bit of what I wrote for the Pioneer Press from a stormy Midway Stadium press box late that hot August 1999 night. I’m glad I did, and I’m very grateful for the memories:

“There are times when nature and art intersect at such a ridiculously perfect moment, it verges on the surreal. One of those times came Saturday night at Midway Stadium in St. Paul. But it didn’t happen when the first lightning bolt lit up the sky, as Michael Stipe was in the middle of a spontaneous, good-humored tirade against corporations. …

“Nor was it when he warned the crowd that: ‘There’s a lightning storm coming this way, so we have to cut things short because we don’t want anything bad to happen. Take off your shirts and enjoy the rain.’ Which is what he, the rest of R.E.M., and their 15,000 fans did. …

“It was when the skies opened up in earnest during the last song — you can’t make this stuff up — ‘It’s the End of the World As We Know It (And I Feel Fine).’ With lightning crackling every few seconds, and sheets of rain pouring down, Stipe asked the crowd, ‘How do you feel?’

“To which the drenched faithful roared, ‘Fine, fine, fine.’ They thrust their hands in the air and danced, reveling in the baptism of wonderful coincidence, and in the knowledge that R.E.M. was alive and kicking and more precious than ever, especially in these days of one-hit wonders and corporate rock.”