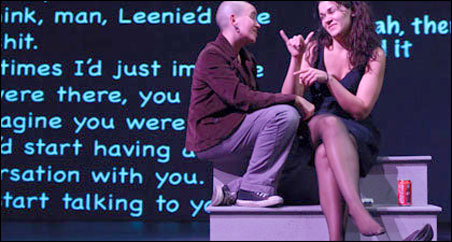 In the world of the performing arts, plaudits like “bold” and “visionary” seem to get tossed around like poker chips. But the way Jack Reuler and his cohorts at Mixed Blood Theatre have gone about their 36th season adds fresh currency to the coinage.

It begins with “radical hospitality,” an admissions policy designed to reinforce the theater’s egalitarian mission and broaden its audience; it’s described as $15 for guaranteed admission, or no cost for those who come the night of show on a first-come, first-served basis. (Minnpost’s Max Sparber delivered his take on the policy here). Then, having invited the curious and uninitiated to come in and sample their wares for free, Mixed Blood opened the season with “Neighbors,” a blend of satire and stereotypes so scabrous and acidic that even the most open-minded patrons felt flush from the experience.

Now comes the Center of the Margins Festival, a trio of plays that challenge our perceptions and assumptions about people with disabilities while swinging the “radical hospitality” door open ever wider. Free cab service to and from the theater will be provided to patrons with disabilities. The Nov. 22 performance of “On the Spectrum” will be streamed online free of charge. Supertitles will appear above the stage during all of the plays; while they typically benefit the hearing impaired, for the play “Gruesome Playground Injuries,” performed by two deaf lead actors, it will aid those who don’t know American Sign Language.

That type of role reversal is one of the things Reuler had in mind after he went over to the Interact Center (a Minneapolis gallery and theater focused on disability issues) a dozen years ago and “saw a better Mixed Blood than Mixed Blood. It made me think we were remiss — in addressing the artificial barriers manifest in race and culture and language, we should have included disability. So for the next 11 years we have done one or two plays a season by, for, or about people with disabilities.”

Meanwhile, Reuler and Mixed Blood conducted focus groups with those in the disability community, getting feedback on everything from a lack of access (hence the free cab rides and a reduced capacity at the theater to allow more room for wheelchairs) to a requested desire for plays containing characters with disabilities without that being the core of the story. The Center of the Margins Festival — three plays each performed at least 10 times between Nov. 11 and Nov. 27 — is the theater’s response, a culmination of Reuler’s 12-year quest to put disability issues at the forefront as well as in the firmament of Mixed Blood’s identity.

It was worth the wait. By biding his time, Reuler has ensured an organic integrity to the spirit of the festival. Instead of any traces of tokenism, or noblesse oblige, Center of the Margins has been fashioned from the wellspring of Mixed Blood’s existing connections with award-winning talent. Yes, the medium — the cab rides, supertitles, and overall thematic emphasis — is indelibly part of the message. But for the festival to be truly successful, Reuler and company understand they need to deliver on the essentials of quality theater — the writing, acting, staging and design. Here is a preview of what should be a “bold” and “visionary” trio of plays.

‘Gruesome Playground Injuries’
Pulitzer finalist Ragiv Joseph originally took his play to Broadway featuring traditional male and female leads. But director Aditi Kapil opted to tell the story of this harrowing, tragicomic relationship between two people from ages 8 to 38 using deaf actresses Alexandria Waile and Nic Zapko. Kapil, author of the Pulitzer-nominated play, “Love Person,” which received its world premiere at Mixed Blood in 2008, has worked extensively with both actresses and set out to find a play that would put them together for the first time.

“A lot of two-woman plays are mother-daughter, and it was hard at first to find the right fit for their amazing gifts as actresses,” Kapil says. “Then I remembered reading ‘Gruesome Playground Injuries,’ which is a tour de force for the performers, and I thought they would kill it, without us having to change too much. It enhances many of the themes of the play, which is about two people who hurt each other, love each other and are best friends in this very human, complicated relationship. Adding the layer of nonheterosexual love and the layer of intimacy that these two deaf girls speak their own language, ASL, heightens the themes in ways that are really gorgeous. When I talked to Ragiv about [the changes she wanted to make], he was really excited about it. Even with his fancy Broadway career, he is coming out to see the premiere.”

“My Secret Language of Wishes”
Reuler requested Cori Thomas’ play “My Secret Language of Wishes” because it prominently features a character with cerebral palsy and a seizure disorder whose condition is not the central facet of the story. (It also contains a compelling racial dynamic that has long been part of Mixed Blood’s métier.) The New York-based Thomas is able to repeat her collaboration with director Marion McClinton, with whom she worked at Pillsbury House last season on her play, “Pa’s Hat.”

“This play came to me when I was walking in Times Square and saw two disabled ladies close in age — a white girl taking care of a black girl — and I was just fascinated by them. The black girl was very severely disabled, and they were going to the subway station together with no wheelchair. I just kept wondering what their lives were like,” Thomas says.

Mixed Blood describes the plot of “Wishes” this way: “An African American attorney agrees to represent a black 17-year old with cerebral palsy, as her white 23-year old caregiver and an affluent African American realtor vie for custody. Contemporaneously, the attorney ponders becoming a mother and co-parent with her Dominican partner.” Jevetta Steele heads up the six-woman cast.

‘On the Spectrum’
Playwright Ken LaZebnik went to Macalester with Reuler nearly 40 years ago and wrote and performed for Mixed Blood during the 1980s before going off to write for “A Prairie Home Companion” and then TV series such as “Touched by an Angel” and “Army Wives” in Los Angeles. But, sparked by watching a nephew with autism and two nieces and nephews who are “on the spectrum” of that affliction, he has also written three plays about it, including “Vestibular Sense,” which premiered at Mixed Blood and won the 2006 Osborne New Play Award, and now “On the Spectrum,” a provocative work directed by Reuler that examines autism as a civil-rights issue.

Reuler commissioned the play after he and LaZebnik did research at a Minneapolis public school a few years ago for “Theory of Mind,” LaZebnik’s portrait of a brilliant teenager with Asperger’s syndrome. While getting the parental signoffs to enter the classroom, they were given an article championing a difference model rather than a disability model for autism. “This model says [people with disabilities] want to be met on their own terms; want to be respected for being autistic, which is revolutionary,” Reuler says. The article became the impetus for LaZebnik’s new play.

“I ended up writing a romance about two people on the spectrum. One is a very high functioning man with Asperger’s who is ‘passing’ without mentioning [his condition], and the other a low-functioning woman who says, ‘I am autistic and proud of it. Let other people deal with it,’ ” LaZebnik says.

“Jack really wanted to engage the online community, and so I did a lot of conversations with many people on various websites. People being able to communicate just on a laptop is a big breakthrough for those on the spectrum who are heavily affected – who are not verbal but can communicate brilliantly. This is totally the case with the woman character, Isis, who has created her own online fantasy world that is both romantic and Tolkien-esque. [She will be played at Mixed Blood by a woman who is on the spectrum.] But the male character’s family is in financial distress, and when the woman says the world should engage with me on my own terms, he counters that the world can’t afford that argument.

“Some people on the spectrum can thrive by becoming conventional. But the activist in my play says you are not being true to yourself if you don’t allow your full self to flower. What intrigues me most is I don’t know the answer.”

Center of the Margins Festival. Three plays at Mixed Blood Theatre, Nov. 11-27. A performance calendar and other details are available here.

World of disabilities explored in trio of plays at Mixed Blood